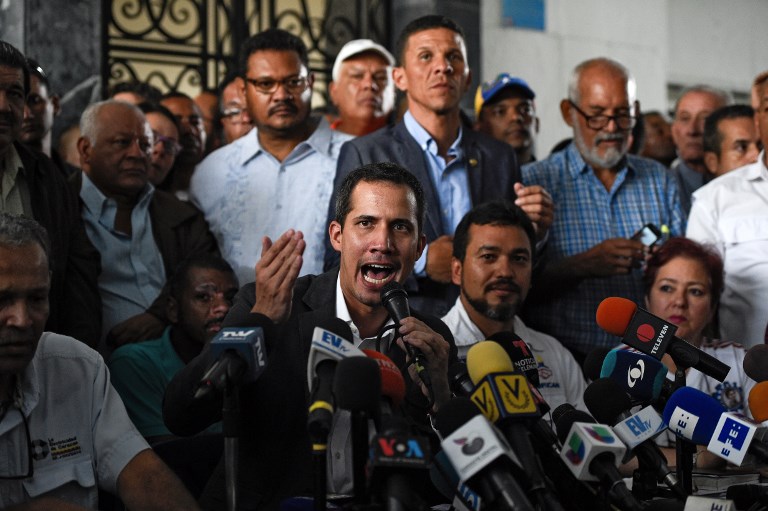 CARACAS, Venezuela – Juan Guaido calls himself a survivor, and he proved that by defying the threat of arrest to make a triumphant return to Venezuela on Monday, March 4.

Since declaring himself interim president in a challenge to Nicolas Maduro on January 23, Guaido has shown skill in his power struggle with the socialist leader.

Guaido failed 10 days ago in a much-publicized bid to bring humanitarian aid in from Colombia and Brazil, but he did get points for being bold.

Guaido, head of Venezuela’s opposition-controlled legislature, did not set out to supplant Maduro, who has presided over a spiraling political and economic crisis in Venezuela.

But the sometimes reserved 35-year-old was thrust to the front of the Venezuelan opposition when more senior leaders were forced from the scene – some detained, others banned from politics and more still pushed into exile.

Guaido called out Maduro as he took a revised oath of office before a crowd of thousands in Caracas, saying, “I swear to formally assume the national executive powers as acting president of Venezuela to end the usurpation, (install) a transitional government and hold free elections.”

US President Donald Trump immediately recognized him as Venezuela’s interim president, followed by a string of countries across the region.

But Guaido, an industrial engineer by training, has shown no fear in challenging the socialist leader’s election to a second term, in a May vote that was boycotted by the opposition and rejected as illegitimate by the United States, European Union and a dozen Latin American countries.

Guaido, who became the youngest person ever to preside over the legislature on January 5, has never been a great public speaker.

But he is known as a talented coalition-builder – something Venezuela’s divided and disorganized opposition badly needs.

“One of his main virtues is putting together teams. He understands the differing positions and does everything in his power to bring them together,” 32-year-old lawmaker Juan Andres Mejia told AFP.

In his short tenure as legislative leader, Guaido got the opposition majority to officially declare Maduro a “usurper” and his re-election a fraud, while promising amnesty for all military and government officials who disavow the president.

He has gained confidence along the way, grinning at rallies and speaking with greater ease.

What he hasn’t found a solution to, though, is the support Maduro enjoys from the military high command and the Supreme Court, institutions that have been pivotal to the regime’s hold on power.

Guaido has not been shy about reaching out to the armed forces, recognizing that he needs them if he is to take power.

“I’m a survivor, not a victim,” he has said, recalling how he survived one of Venezuela’s worst natural disasters as a teenager: the Vargas tragedy of December 1999, when mudslides caused by torrential rain killed thousands of people.

Back then, Guaido lived with his mother and 5 siblings in the coastal state of Vargas.

“I know what it means to be hungry,” he said.

His introduction to politics came alongside the generation of students that held mass protests against Chavez in 2007.

That movement inflicted Chavez’s only electoral defeat, in a referendum on reforming the constitution to allow his indefinite re-election.

“Guaido is a fresh face, considered a man of consensus by the moderates and also respected by the radicals for having taken part in those protests,” Diego Moya-Ocampos, an analyst at London-based IHS Markit consultants, told AFP.

Guaido was a founding member of the Popular Will (VP) party in 2009 and has now become its most recognizable face. Previous leader Leopoldo Lopez is under house arrest for leading anti-Maduro protests in 2014, and his heir apparent, Freddy Guevara, fled to the Chilean embassy after he was accused of inciting violent protests in 2017.

Guaido, who took part in those protests, was elected deputy for his native Vargas in 2015.

He caused ripples by accusing state oil company PDVSA of corruption, but remained a relative unknown until recently.

“To be honest, I didn’t know who he was. Hopefully he won’t prove to be a fraud,” said Jose Hernandez, a 24-year-old administrator, at a recent rally in support of Guaido.

Mejia, his legislative colleague, says Guaido is playing “a difficult game:” Venezuela is “used to personality cults and authoritarian leadership, and that’s placing a big burden on Juan. Change doesn’t depend only on him, it’s down to everyone.”

Guaido was briefly detained by intelligence agents on January 13. But he was released after less than an hour.

But Guaido has ample reason to be on the lookout. Prison service minister Iris Varela has said of him: “I’ve already got his jail cell prepared.” – Rappler.com