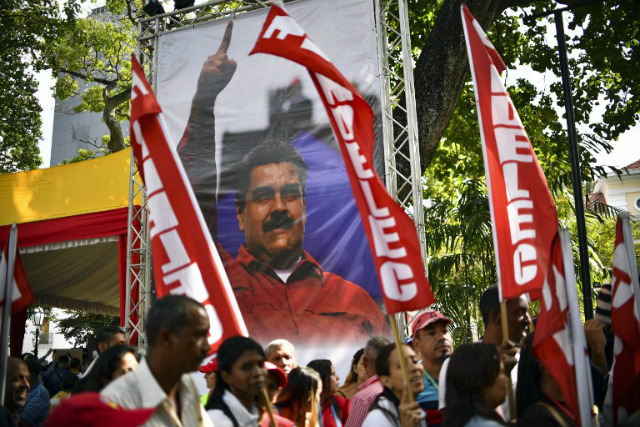 CARACAS, Venezuela (UPDATED) – Venezuela expelled Germany’s ambassador on Wednesday, March 6, hitting out at international support for opposition leader Juan Guaido as the US stepped up sanctions in a bid to force out his rival President Nicolas Maduro.

Separately, an American journalist was detained by Venezuelan security services for some 12 hours and due to be deported, in an incident condemned by advocacy groups as an attack on free speech.

The foreign ministry gave German envoy Daniel Kriener 48 hours to leave for “interference” in Venezuela’s internal affairs. He had greeted Guaido at Caracas airport on his return to the country on Monday.

Guaido said Kriener’s expulsion will be seen “as a threat to the free world.”

Kriener was among more than a dozen foreign representatives to welcome the National Assembly leader – recognized as interim president by more than 50 countries – but so far the only one deemed “persona non grata.”

Kriener had helped to try to bring humanitarian aid to the country, Guaido said in a speech to opposition lawmakers, adding: “It seems that the Maduro regime does not forgive anyone who wants to help Venezuela.”

Caracas “is sending a message to the international community that such frontal support would have consequences, but it also carries a risk,” said Venezuelan analyst Mariano de Alba.

Meanwhile, journalist Cody Weddle, who worked in Venezuela for several years as a correspondent for a variety of US media, “has been released after being detained by Venezuelan authorities,” Miami’s WPLG Local 10 News, which he reported for, said on Twitter.

According to Venezuela’s National Union of Press Workers he was picked up at 8:00 am, his work equipment was confiscated, and he was held for over 12 hours before finally being released and sent to Simon Bolivar International Airport to be deported.

The union said it had been in contact with Weddle and he is fine. He has lived in Venezuela since 2014 and worked as a stringer for ABC News, the CBC of Canada, the Miami Herald and The Telegraph in Britain. Weddle is to be deported on Thursday, the union said.

“A journalist who has been in Venezuela for five years, deported for reporting the news,” the guild said.

Washington continued to tighten the screws on its campaign of sanctions to force Maduro from power, revoking the visas of 77 people linked to the regime, including officials and their families.

“We will continue to hold all of the Maduro regime accountable until democracy and libertad (liberty) are fully restored,” US Vice President Mike Pence said in a speech.

The move brings to more than 250 the number of Venezuelans targeted by US visa bans, a State Department official told AFP.

National Security Advisor John Bolton said the US also is putting foreign financial institutions on notice that they will face sanctions if they facilitate “illegitimate transactions that benefit Nicolas Maduro and his corrupt network.”

The US is already trying to cripple Maduro’s access to finances via sanctions on state oil company PDVSA and handing control to Guaido of Venezuelan bank accounts in the United States.

“Venezuela clearly illustrates the way violations of civil and political rights –- including failure to uphold fundamental freedoms, and the independence of key institutions –- can accentuate a decline of economic and social rights,” said Bachelet, a former president of Chile.

“This situation has been exacerbated by sanctions,” Bachelet said in her annual report to the Human Rights Council in Geneva.

Guaido, 35, returned home to a hero’s welcome on Monday, having defied a ban on leaving the country to embark on a 10-day tour of South American allies. He remains free despite the threat of arrest by the government.

When he returned to Caracas – his latest challenge to Maduro’s authority – Guaido announced to tens of thousands of supporters his plans for new protests on Saturday.

He has vowed to set up a transitional government and hold new elections.

As part of his challenge to Maduro, Guaido is attempting to take control of the state bureaucracy, which he considers to have been “kidnapped” through blackmail and persecution.

“The public administration is practically paralyzed. In the town halls, people only go to work three days a week and even then barely half the day,” said Yanez.

During his travels, Guaido met Pence and the leaders of Colombia, Brazil, Argentina, Paraguay, Chile and Ecuador. – Rappler.com