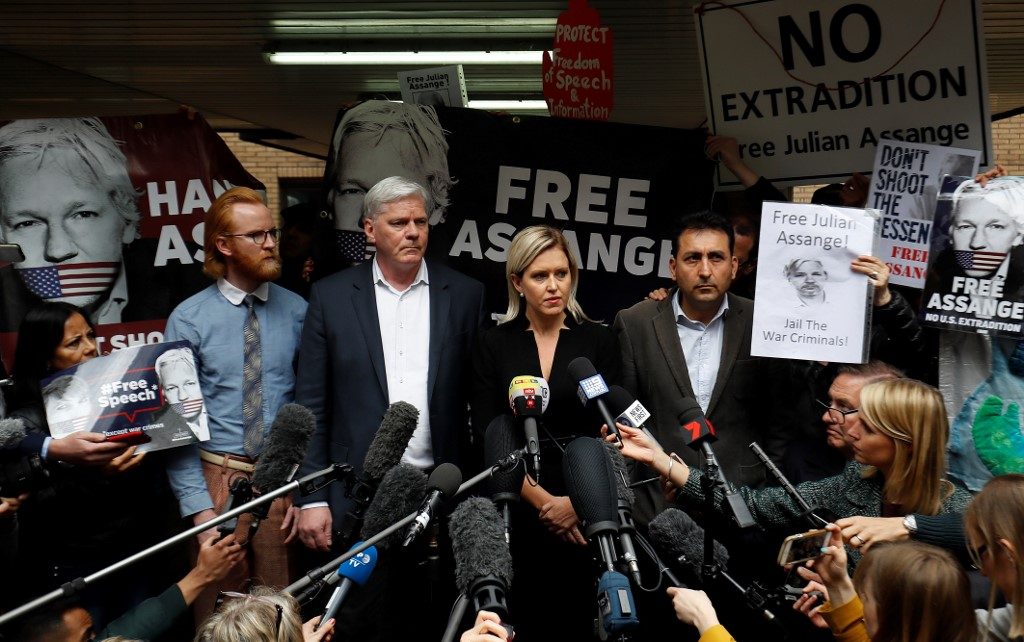 Facebook Twitter Copy URL
Copied
(UPDATED) 'I do not wish to surrender myself for extradition for doing journalism that has won many awards and protected many people,' Julian Assange tells the judge

LONDON, United Kingdom (UPDATED) – WikiLeaks founder Julian Assange told a court on Thursday, May 2, he would oppose extradition to the United States as the legal process began in London, a day after he was jailed  for breaching his bail conditions in a former case.

He appeared via videolink at Westminster Magistrates Court, where a lawyer for the US authorities briefly set out his alleged involvement in the release of classified documents.

“I do not wish to surrender myself for extradition for doing journalism that has won many awards and protected many people,” Assange told the judge, who set the next hearing for May 30.

The Australian was jailed on Wednesday, May 1, for 50 weeks for breaking his bail conditions in 2012, when he fled to Ecuador’s London embassy to avoid extradition to Sweden.

He was accused of sexual assault and rape but strongly denied the claims, saying they were linked to the whistleblowing work of WikiLeaks.

Assange feared they were a pretext to get him in custody and eventually transfer him to the United States to face prosecution.

He was dragged out of the embassy and arrested on April 11 after Quito gave him up. The Swedish claims had been dropped, but he was later that day convicted of skipping bail.

The 47-year-old was subsequently confronted with a warrant for extradition to the United States.

The US indictment charges him with “conspiracy” for working with former US Army intelligence analyst Chelsea Manning to crack a password stored on Department of Defense computers in March 2010.

Manning passed hundreds of thousands of classified documents to WikiLeaks, exposing US military wrongdoing in the Iraq war and diplomatic secrets about scores of countries.

The charge carries a maximum jail term of 5 years.

Assange’s supporters, who protested outside the court on Thursday, believe that more serious charges could be filed if he is transferred to the US, and he fears the death penalty.

WikiLeaks editor-in-chief Kristinn Hrafnsson said on Wednesday that all efforts would now be focused on preventing Assange’s extradition to the US.

“It will be a question of life and death,” he warned.

In a letter read out in court on Wednesday, however, Assange apologized for skipping bail 7 years ago.

“I did what I thought at the time was the best or perhaps the only thing that I could have done,” he said, adding: “I apologize unreservedly.”

The next hearing in the US extradition case is only for further case management, and the whole process could take years.

The Swedish claims against Assange date back to 2010, when he was at the center of a global storm over WikiLeaks’ exposures.

The sexual assault claim expired in 2015 but while the rape claim was dropped in 2017, the alleged victim wants the case reopened.

If Stockholm makes a formal extradition request, Britain must decide whether to consider it before or after that of the United States.

WikiLeaks is back in the news in the United States, over its alleged role in the leak of Hillary Clinton’s emails in 2016 US presidential election. – Rappler.com