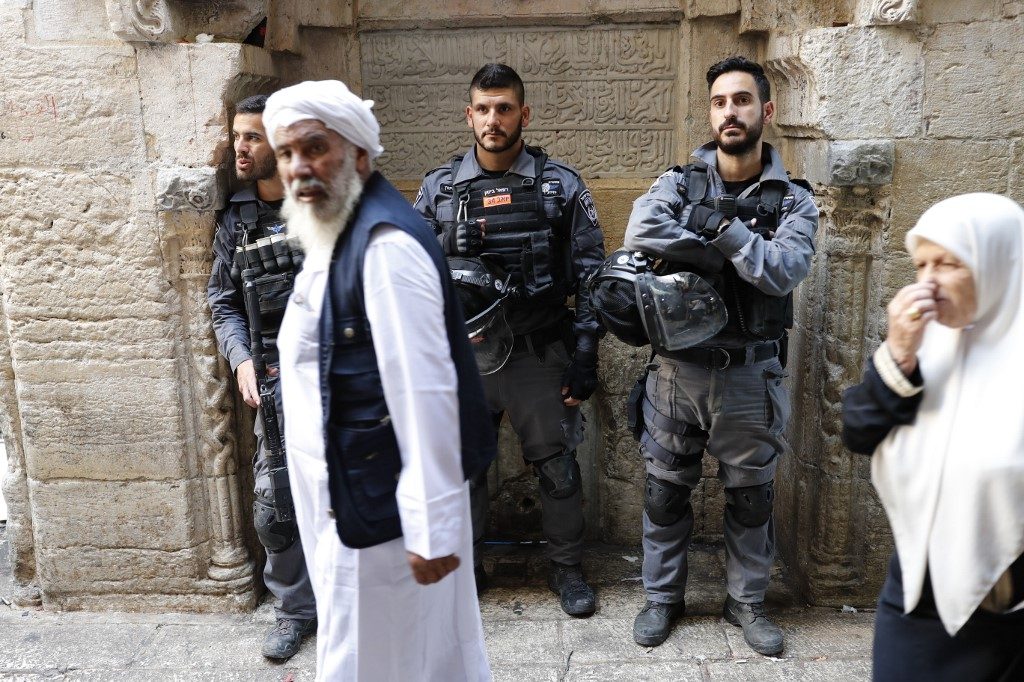 Facebook Twitter Copy URL
Copied
The attack comes as Muslims are due to visit the Al-Aqsa mosque compound for the final Friday prayers of the holy month of Ramadan, two days before a controversial Israeli march through the predominantly Palestinian Old City

JERUSALEM – A Palestinian stabbed and wounded two Israelis across the Old City of annexed east Jerusalem on Friday, May 31, before being shot dead, police said, in an uptick in violence despite tight security for Ramadan.

The attack came as tens of thousands of Muslims were due to visit the Al-Aqsa mosque compound for the final Friday prayers of the holy month of Ramadan and two days before a controversial Israeli march through the predominantly Palestinian Old City.

In another incident, a Palestinian teen was shot dead by Israeli forces in the occupied West Bank, the Palestinian health ministry said.

Palestinian media said the 16-year-old was trying to sneak through Israeli fences to pray at Al-Aqsa, though the army did not immediately respond to requests for comment.

In the Jerusalem incident, police spokesman Micky Rosenfeld said a 19-year-old Palestinian stabbed one Israeli near the Damascus Gate and another near Jaffa Gate on the other side of the walled Old City.

One of the Israelis was in a critical condition and the other suffered serious wounds, he said.

“Police units that responded at the scene saw the attacker with a knife. The attacker was shot and killed,” Rosenfeld said.

The Old City has been the scene of numerous stabbings of Israelis by Palestinian assailants in recent years, though a relative calm has existed for several months.

After the attack, gates to the Old City were briefly sealed before being reopened as thousands thronged towards the mosque for midday prayers, an AFP journalist reported.

At least two entrances to Al-Aqsa were open at mid-morning, the journalist said, though there was a heavy police presence and a normally-packed shopping market was half empty.

The Al-Aqsa mosque compound is a key religious and political symbol for Palestinians. It is also holy for Jews, who refer to it at the Temple Mount.

The attack came just two days before Israelis hold a major march to mark Jerusalem Day, the annual commemoration of the capture of east Jerusalem in the Six-Day War of 1967.

It was later annexed in a move not recognized by the international community.

In December 2017, US President Donald Trump broke with decades of bipartisan policy to recognise Jerusalem as Israel’s capital in a move that prompted the Palestinians to cut all contacts with his administration and which has sent tensions soaring.

Israel insists the whole of Jerusalem is its “eternal, indivisible capital”. The Palestinians demand the city’s eastern sector as the capital of their long promised state.

He is a key architect of the peace plan that the White House says it intends to present in the coming weeks.

But the plan, previously delayed for an Israeli general election on April 9, could face further postponements due to Israeli politics.

Israel is set to hold another general election in September after Netanyahu failed to form a coalition government, and the plan is widely seen as too sensitive an issue to introduce during a political campaign.

The Palestinian leadership has rejected the peace plan without seeing it, saying Trump has shown himself to be blatantly biased in favour of Israel.

They cite moves including declaring the disputed city of Jerusalem Israel’s capital and cutting hundreds of millions of dollars in Palestinian aid.

Trump has also handed Netanyahu other diplomatic coups, notably US recognition of Israel’s 1981 annexation of the strategic Golan  Heights captured from Syria in the Six-Day War.

On Thursday, Kushner delivered Netanyahu a gift from Trump, a map of Israel signed and approvingly annotated by the US president showing the Golan as inside the Jewish state’s borders. – Rappler.com