Facebook Twitter Copy URL
Copied
3 decades on, the crackdown remains one of the most sensitive subjects in mainland China and any mention is strictly censored. Here are 5 key moments from that tumultuous spring

Students rallying for democracy and freedom had filled the symbolic heart of Chinese power, drawing in workers and intellectuals and inspiring demonstrations across the country. (From 1989 to ‘1984’: Generation Tiananmen lament China’s descent)

But after weeks of protest, the movement was shattered by an overnight military assault that left hundreds of people dead – by some estimates, more than 1,000 – and a ruling party hell-bent on preventing any such future challenges to its power.

Three decades on, the crackdown remains one of the most sensitive subjects in mainland China and any mention is strictly censored. (READ: China detains activists, mutes livestreams ahead of Tiananmen anniversary)

Here are 5 key moments from that tumultuous spring:

April 15: Death of a reformer

Purged during the Cultural Revolution, Hu Yaobang was elected Chinese Communist Party leader in 1981 but dismissed in 1987 for his relaxed handling of a wave of student unrest.

Hu was popularly revered as a liberal reformer and protests first break out at Tiananmen Square two days after his death on April 15.

Fuelled by frustration from years of economic upheaval, the movement gathers pace as public mourning for the former party chief morphs into wider calls for political change and curbs to official corruption.

On April 25, paramount leader Deng Xiaoping says the protest movement seeks to topple the Communist Party – a claim that forms the basis of an explosive editorial in the official People’s Daily newspaper the next day.

Incensed by the editorial’s rhetoric, crowds flood the streets of Beijing on April 27 and protests erupt across the nation. 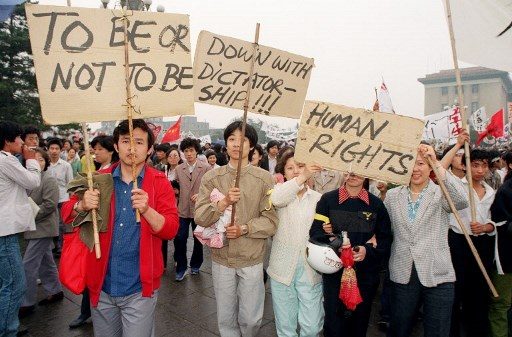 A week later on the 70th anniversary of the May Fourth Movement – the landmark protest against colonialism and imperialism that rocked China in 1919 – a new mass protest breaks out in Beijing and other cities from Shanghai to Xi’an.

Hundreds of students occupy Tiananmen Square and begin a hunger strike on May 13, joined by thousands more in the following days.

Demonstrators disrupt a historic visit by the reformist Soviet leader Mikhail Gorbachev for the normalization of Sino-Soviet ties on May 15.

Premier Li Peng meets student activists including Wu’er Kaixi and Wang Dan in a nationally televised meeting on May 18, in which students berate the party leaders. Party chief Zhao Ziyang emotionally pleads with hunger strikers to leave the square on May 19 in what is his last public appearance.

Sidelined for opposing the use of force, Zhao is sacked and put under house arrest for the next 16 years until his death.

Premier Li, later dubbed the “Butcher of Beijing” for his role in the bloody crackdown, declares martial law in parts of the capital on May 20.

But the students remain, erecting a statue titled the “Goddess of Democracy” facing the portrait of Mao Zedong on the wall of the Forbidden City. On the night of June 3, at the Muxidi crossroads, tanks break through the line of buses that had blocked their entry, and soldiers open fire on the crowd.

Advancing from all sides, the troops encircle Tiananmen Square in the early hours of June 4. Under the eyes of paratroopers with fixed bayonets, the remaining students leave the square.

Most of those slain are on the streets outside the square. The number of casualties is disputed, and the government has never released an official death toll.

But estimates from academics, witnesses and human rights groups have put the figure between several hundred to over a thousand.

On June 5, a solitary man blocks a column of tanks and armoured vehicles stretching far down the road in a minutes-long standoff before two men pull him away.

Captured on camera, “Tank Man” becomes one of the defining images of the 20th century.