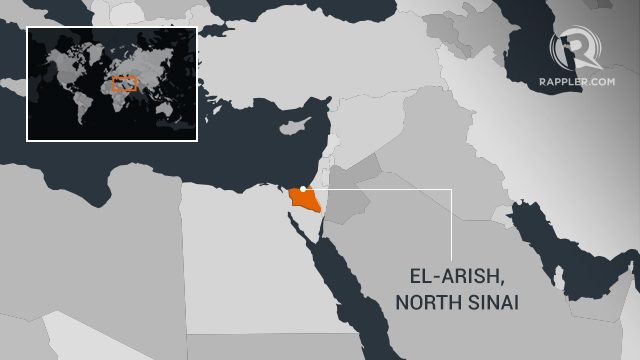 Facebook Twitter Copy URL
Copied
The attack on June 5 claimed by the Islamic State group leaves dead 8 policemen southwest of El-Arish, capital of North Sinai, and 5 militants are killed in exchanges of fire that ensued

CAIRO, Egypt – Egyptian security forces have killed 14 suspected militants during a raid carried out in the restive Sinai Peninsula in response to a deadly checkpoint attack, the authorities said.

The attack on Wednesday, June 5, claimed by the Islamic State group (IS, formerly known as ISIS or the Islamic State in Syria and Iraq), left dead 8 policemen southwest of El-Arish, capital of North Sinai, and 5 militants were killed in exchanges of fire that ensued.

Some other suspected militants fled the scene before security forces tracked down and killed 14 of them in the raid, the interior ministry said in a statement.

“Following the route of escaped elements responsible for the attack led to a group of terrorist elements in an abandoned hideout in an empty lot,” the ministry said.

The security forces surrounded the suspected militants before engaging “in a heavy shootout” which killed 14 of them, it added.

They also found 14 guns, 3 explosive devices and two explosive belts in their possession.

Pictures of the slain militants lying in pools of blood were also circulated along with the statement.

AFP also received a recording from a police officer, who asked to remain anonymous, of security forces communications that appeared to confirm that a military plane destroyed a tank hijacked by a militant during the attack.

In a statement released by its propaganda wing, Amaq, the Islamic State group said its fighters had launched “two simultaneous attacks on two police checkpoints” in El-Arish.

The attack took place on the day Egyptian Muslims marked the holiday of Eid al-Fitr.

In February 2018, the army launched a nationwide offensive against the Islamist militants, focused mainly on North Sinai.

The troubled hotspot has long been a center of insurgents affiliated with ISIS that Egypt has battled against.

According to official figures, around 665 insurgents have been killed since the start of the operation, while the army has lost some 50 soldiers.

No independent statistics are available and the region is largely cut off to journalists, making verification of casualty figures extremely difficult. – Rappler.com