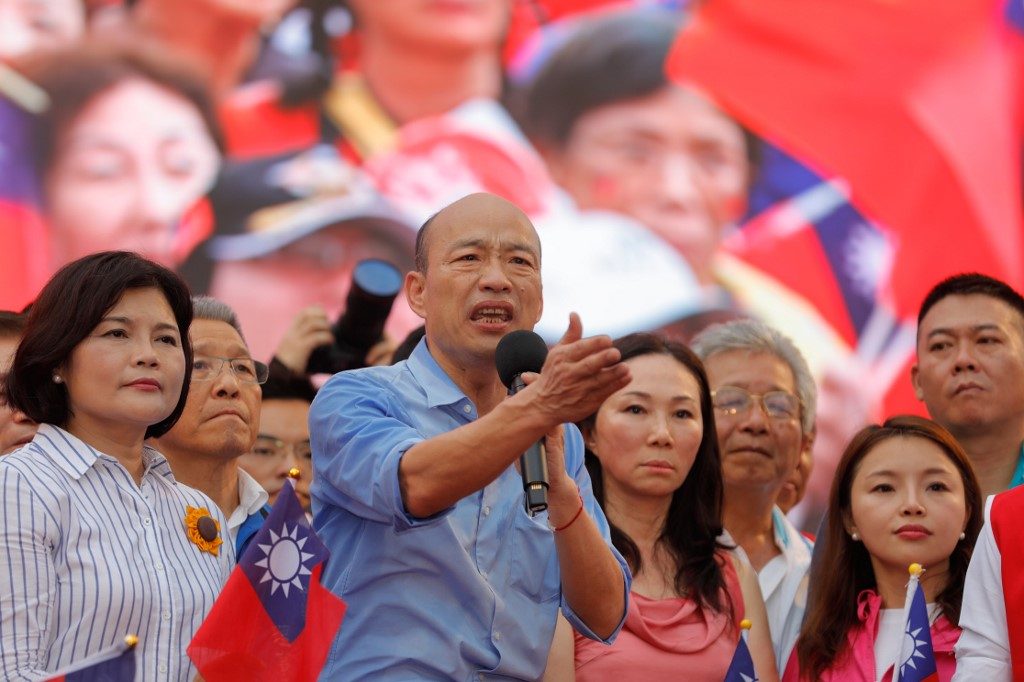 Facebook Twitter Copy URL
Copied
Han Kuo-yu, the mayor of Kaohsiung city, is among 5 candidates announced by the opposition Kuomintang party for its primary election

TAIPEI, Taiwan – A populist mayor who can command huge crowds and wants closer ties with China has thrown his hat in the ring to stand as a candidate in Taiwan’s upcoming presidential elections.

Han Kuo-yu, who seized the mayoralty of southern Kaohsiung city from the ruling party in a shock victory last year, was among 5 candidates announced on Monday, June 10, by the opposition Kuomintang (KMT) party for its primary election.

Confirmation of Han’s entry shakes up an opposition list that had until now been dominated by Taiwan’s richest man, Foxconn billionaire Terry Gou.

Taiwan goes to the polls in January and the race will be dominated by its relationship with China.

Gou and Han are seen as the two front-runners in the KMT primary, which will conclude on July 16.

Under current president Tsai Ing-wen, relations with Beijing have soured because she and her ruling Democratic Progressive Party (DPP) refuse to recognize the idea that Taiwan is part of “one China”.

Since her election Beijing has cut official communications, ramped up military exercises, poached diplomatic allies and ratcheted up economic pressure on the island.

The KMT are pushing for much warmer ties with Beijing – a stance that appeals among older voters but rattles the nerves of many younger Taiwanese.

Han shot to political stardom after ending the DPP’s 20-year rule in its traditional stronghold Kaohsiung during local elections last November, with media describing his rising popularity as the “Han tide”.

Earlier this month, tens of thousands of supporters gathered in Taipei for a rally that was seen as a show of strength before announcing his run.

Supporters see him as a plain talking maverick and political outsider who has shaken up the staid politics of the KMT – but detractors are unnerved by how favorably he speaks of China.

The 61-year-old took the unusual step of meeting with the head of China’s Taiwan Affairs Office and Hong Kong’s chief Carrie Lam, among other Chinese officials, during a trip to the mainland in March.

Observers say the KMT race is largely between Han and Gou, who has been actively campaigning since announcing in April that he has secured the backing of a local Sea Goddess for his presidential bid.

Gou, 69, has vowed to balance Taiwan’s relationship with both the United States and China, but his huge factories in China have led to concerns about possible conflicts of interest. – Rappler.com