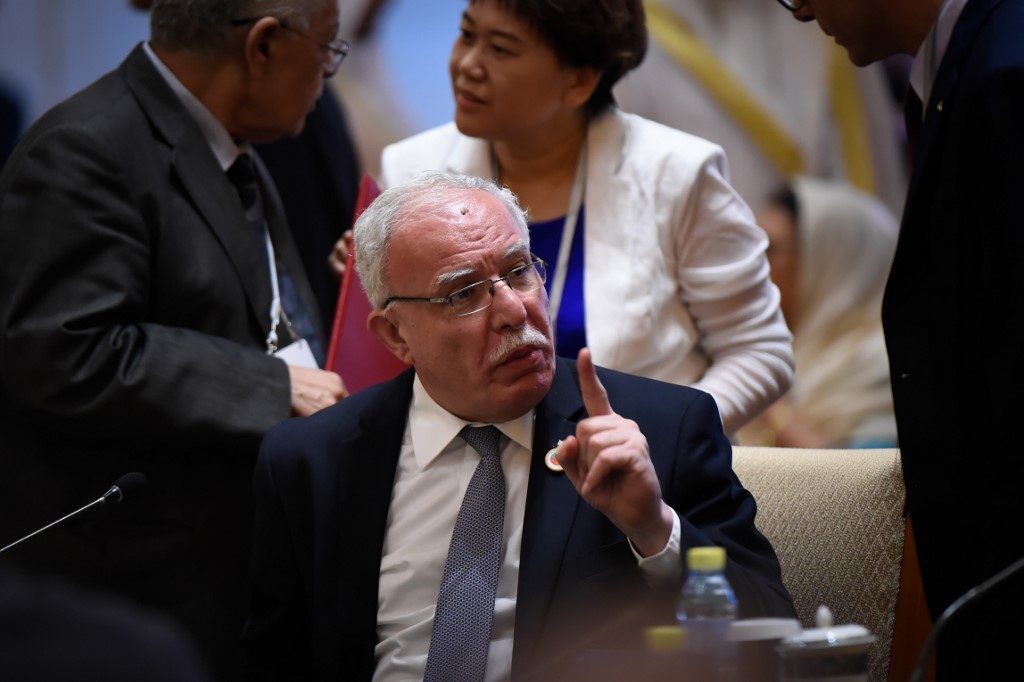 Facebook Twitter Copy URL
Copied
'We cannot accept the annexation of territories by any country because this is (a) violation of international law,' says Palestinian foreign minister Riyad al-Maliki

WARSAW, Poland – The Palestinian foreign minister on Monday, June 10, called for sanctions on Israel if it starts to annex parts of the occupied West Bank.

But Riyad al-Maliki also questioned whether Israel was a “holy cow” no one dare touch.

He was talking to reporters in Poland after a US envoy’s comments that Israel had the right to annex at least some of the territory captured in 1967.

US ambassador to Israel David Friedman made the claim in a New York Times interview published Saturday, June 8,

“Under certain circumstances, I think Israel has the right to retain some, but unlikely all, of the West Bank,” Friedman said.

Israel occupied the West Bank in the 1967 Six-Day War and the continued construction of settlements there has been a major stumbling block to progress in the peace process with the Palestinians. The international community regards the settlements as illegal.

“Friedman with his statement is trying to help Netanyahu to have the courage to take such a decision” to annex, said Maliki.

“This is really something that the international community has to stand up to,” he said.

“We cannot accept the annexation of territories by any country because this is (a) violation of international law.”

Sanctions ‘should be expected’

The minister said sanctions should be imposed if Israel resorts to annexation.

“It should be expected that (the) international community will take up sanctions against Israel if Israel really ventures into such (an)approach.

“Or when it comes to Israel, is it really the holy cow that no one could really touch?”

In Jerusalem, the Palestinian foreign ministry said it was looking at filing a complaint with the International Criminal Court.

The Palestinian leadership has already rejected the long-delayed US peace plan, saying President Donald Trump’s moves so far show him to be blatantly biased in favor of Israel.

The Palestinians have called for countries to boycott a June 25-26 conference in Bahrain to discuss economic aspects of the peace deal.

Putting settlements under Israeli sovereignty on a large-scale could kill any remaining hopes for a two-state solution to the conflict with the Palestinians. – Rappler.com