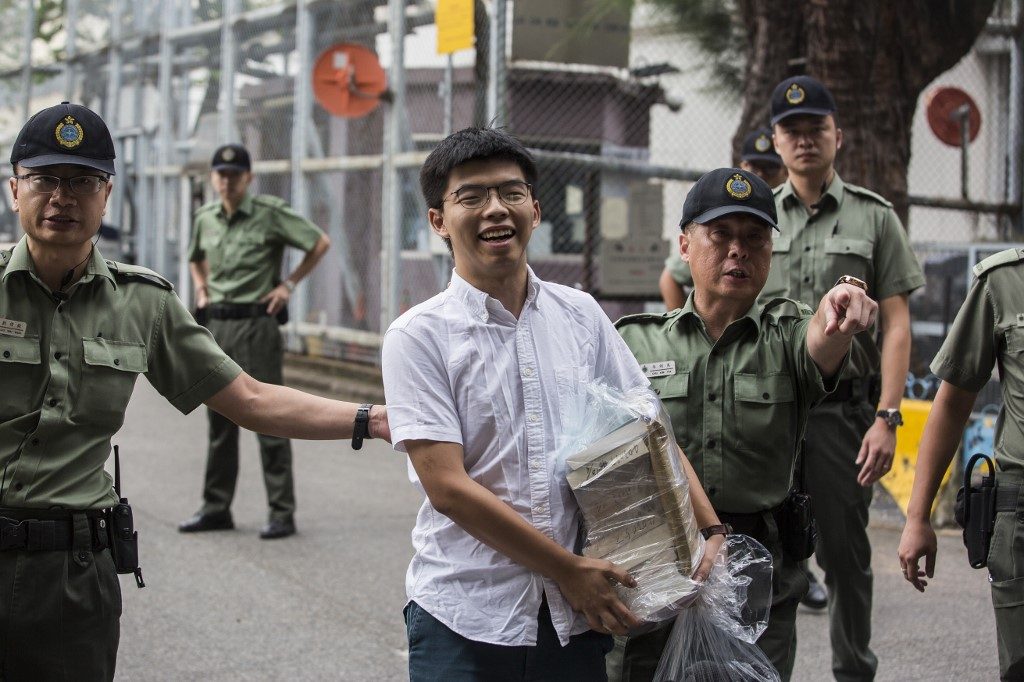 Organizers said some two million people – more than a quarter of the population – marched in tropical heat on Sunday, June 16, calling for the resignation of chief executive Carrie Lam and protesting against a bill that would have allowed extraditions to the Chinese mainland.

Hundreds were still blocking a road outside Lam’s office on Monday, demanding dialogue with the authorities.

The city has witnessed unprecedented scenes with two record-breaking rallies a week apart punctuated by violent clashes between protesters and police armed with tear gas and rubber bullets.

Wong, the poster child of the huge pro-democracy “Umbrella Movement” protests of 2014, became the latest voice to call for Lam’s resignation as he was released from a sentence imposed over his leadership of those demonstrations.

“She is no longer qualified to be Hong Kong’s leader,” said Wong, who was sent to prison in May but released early for good behavior. “I will also fight with all Hong Kongers to oppose the evil China extradition law.”

Opposition to the extradition bill united an unusually wide cross-section of Hong Kong in recent weeks, from influential legal and business bodies to religious leaders.

And while the spark for the last week of protests has been the threat of extradition to China, the movement has since morphed into the latest expression of public rage against both the city’s leaders and Beijing.

Many Hong Kongers believe China’s leaders are stamping down on the financial hub’s unique freedoms and culture.

They point to the failure of the “Umbrella Movement” to win any concessions, the imprisonment of protest leaders, the disqualification of popular lawmakers and the disappearance of Beijing-critical booksellers, among recent examples.

In an interview with HK01 on Monday, Lam’s top advisor Bernard Chan said no chief executive would dare reintroduce the bill now.

The estimate for Sunday’s massive rally has not been independently verified but if confirmed it would be the largest demonstration in Hong Kong’s history.

Police, who historically give far lower estimates for political protests, said 338,000 people turned out at the demonstration’s “peak” – still their largest crowd estimate on record.

Beijing, meanwhile, reiterated its backing of Lam, saying it would “continue to firmly support the chief executive and efforts by the government of the Special Administrative Region to govern according to law.”

But analysts say China’s powerful president Xi Jinping has been dealt a rare setback with the suspension of the extradition law – although they warned Beijing would bite back by tightening its grip on the semi-autonomous city.

“It’s a massive repudiation of the idea that Hong Kong will be effectively, over time, fully absorbed into mainland China,” said Bill Bishop, publisher of the Sinocism China Newsletter.

“You will see a redoubling of efforts by the party to squeeze Hong Kong in ways that are not necessarily going to be totally obvious,” he said.

The violent crowd control measures on Wednesday, June 12, used by police as protesters tried to storm the city’s parliament to stop the bill being debated, have proved enormously costly for Lam’s government.

“I think she has lost any remaining credibility or legitimacy to rule in Hong Kong because of her own mishandling of this whole affair,” lawmaker Charles Mok told RTHK Radio.

Protesters have called on her to resign, shelve the bill permanently and apologize for police using tear gas and rubber bullets on Wednesday. They have also demanded all charges be dropped against anyone arrested.

“We will have to stay here till Carrie Lam changes her mind,” said Candy, 32.

But others weren’t sure if Lam’s resignation would make a difference given Beijing’s hold on the city.

“The Chinese government will just send another Carrie Lam and there will be no change,” fumed Kok, a 21-year-old design student. – Rappler.com