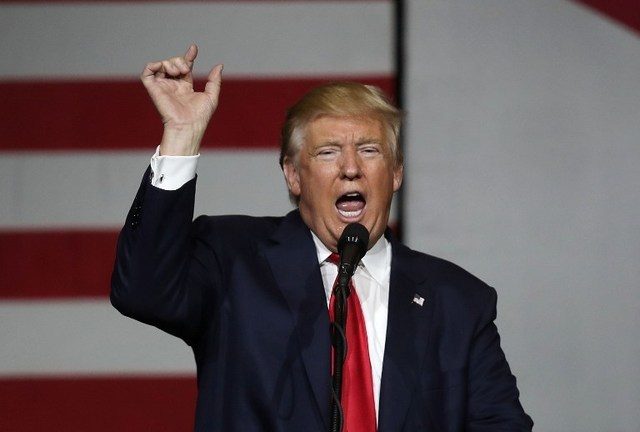 Facebook Twitter Copy URL
Copied
Organizers claim the Orlando rally has sold out a 20,000-seat arena, with many more to gather outside, watching on big screens

Organizers claim the Orlando rally has sold out a 20,000-seat arena, with many more to gather outside, watching on big screens.

Trump portrayed the scale of the event as only one step below a rock concert.

“Look what is going on in Orlando, Florida, right now! People have never seen anything like it (unless you play a guitar). Going to be wild – See you later!” he tweeted.

Trump then returned to his almost daily claim that the media fails to reflect what he considers his achievements and popularity.

“The Fake News doesn’t report it, but Republican enthusiasm is at an all time high,” he tweeted.

After more than two drama-filled years at the White House, the fast-talking real estate salesman bets that a strong economy and his promise to fight for forgotten blue collar workers will persuade the country to give him a second term in 2020.

But more than 20 Democrats are lining up to take him on and there’s no question that a lengthy probe into Trump’s dealings with Russia and his divisive, bruising style have wounded the unconventional president.

A wide range of polls show Trump lagging far behind Democratic frontrunner Joe Biden, who is campaigning on a promise to return the country to what he portrays as the calmer, gentler days of Barack Obama, under whom he served as vice president.

And it’s not only Biden who is ahead.

Even Pete Buttigieg, the gay, small-city mayor emerging as one of the surprise stars of the Democratic field, narrowly leads Trump, according to a poll from Fox News released this weekend.

Polls so far in advance have limited value and in 2016 they famously failed to predict Trump’s defeat of Democrat Hillary Clinton.

But in a sign of frayed nerves, Trump is lashing out at what he calls “fake” polling, while multiple US media reports say that his campaign has fired several of its own pollsters.

Democrats are fired up, with the party’s most active wing veering left and a vocal minority pushing for Trump’s impeachment.

So if Trump is going to win, he’ll need everyone from his own fervent base on the right to turn out, setting the stage for a sharply polarized election.

The Orlando speech will see him aim directly at that demographic in a state likely to be crucial to either candidate in amassing the necessary electoral college votes for victory.

Expect Trump, the self-promoting hero of his ghost-written book “The Art of the Deal,” to claim the US economy is richer, the military stronger, and the country more respected than ever in its history.

These are the voters who steered Trump to improbable victory in 2016, when he faced the polished and experienced Clinton.

By homing in on working class white Americans and tapping into their grievances over globalization and the liberal elites, Trump successfully ate into the Democrats’ own base.

On Tuesday he will renew that pitch.

“You’ve always been loyal to this nation and finally you have a president who’s loyal to you,” he tells a roaring crowd in his latest official campaign video.

“The way he looks at it, it worked beautifully in 2016 when everyone else was wrong, so he’ll follow the same instincts and (believe he’ll) win again in 2020,” veteran University of Virginia political analyst Larry Sabato said.

“It may not be the right strategy, but it is Trump, and he’s incapable of reorienting himself.” – Rappler.com