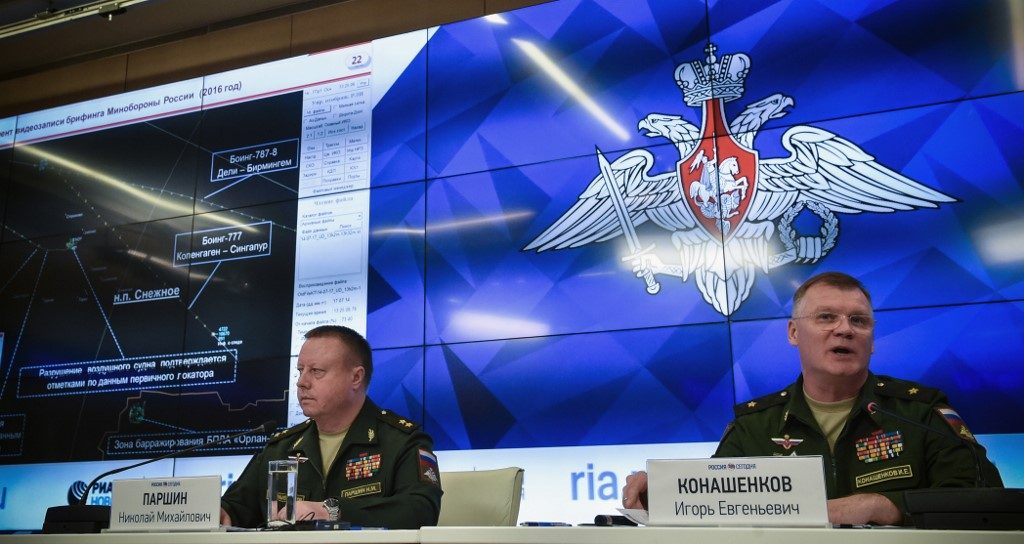 Facebook Twitter Copy URL
Copied
The Dutch-led probe says it will first inform families, and then hold a press conference to unveil 'developments in the criminal investigation' into the downing of the Malaysia Airlines Boeing 777

THE HAGUE, Netherlands – International investigators are on Wednesday, June 19, expected to announce charges against several suspects in the shooting down of flight MH17 over eastern Ukraine 5 years ago in an attack which killed all 298 people on board.

The Dutch-led probe has said it will first inform families, and then hold a press conference to unveil “developments in the criminal investigation” into the downing of the Malaysia Airlines Boeing 777.

The breakthrough comes nearly a year after the investigators said that the BUK missile which hit the plane had originated from a Russian military brigade based in the southwestern city of Kursk.

The airliner travelling between Amsterdam and Kuala Lumpur was torn apart in mid-air on July 17, 2014 over territory in eastern Ukraine held by pro-Russian separatists.

“The names will be announced. Charges will be brought, Zerkal said, adding that a Dutch court would then “start working to consider this case”.

Zerkal added that the transfer of weapons like the BUK anti-aircraft missile system “is impossible without the (Russian) top brass’s permission” and said others would have been involved beyond those being charged.

The Joint Investigation Team (JIT) probing the attack – which includes Australia, Belgium, Malaysia, the Netherlands and Ukraine – has declined to confirm that it will announce charges.

The Netherlands and Australia said last May that they formally “hold Russia responsible” for the disaster, after the findings on the origin of the missile were announced. Of the passengers who died, 196 were Dutch and 38 were Australian.

Moscow has vehemently denied all involvement.

Dutch broadcaster RTL, quoting anonymous sources, said the suspects could be tried in absentia as Russia does not extradite its nationals for prosecution.

“I expect there will be important new information. That means the inquiry is advancing,” Piet Ploeg, president of a Dutch victims’ association who lost 3 family members on MH17, was quoted as saying by broadcaster NOS on Friday, June 21.

Investigative website Bellingcat said separately it will also name “individuals linked to the downing of MH17” on Wednesday, June 19. It said its reporting was “totally independent and separate from the JIT’s investigation.”

The JIT said last year that MH17 was shot down by a BUK missile from the 53rd anti-aircraft brigade based in Kursk, but that they were still searching for suspects.

They showed videos and animation of the BUK launcher as part of a Russian military convoy, using video clips found on social media and then checked against Google Maps, as it travelled from Kursk to eastern Ukraine.

Investigators said they had also identified a ‘fingerprint’ of 7 identifying features that were unique to the BUK including a military number on the launcher.

Russia insisted last year that the missile was fired by Kiev’s forces, adding that it was sent to Ukraine in the Soviet era and had not been returned to Russia.

The Netherlands said it would study the information but added that details previously provided by Russia – such as the alleged presence of a Ukrainian jet near the airliner on radar images – were incorrect.

Ties between Moscow and The Hague were further strained last year when the Dutch expelled 4 alleged Russian spies for trying to hack into the Dutch-based Organization for the Prohibition of Chemical Weapons.

The war in eastern Ukraine and the MH17 disaster continue to plague relations between Russia and the West.

Since 2014, some 13,000 people have been killed in the war in the east, which erupted after a popular uprising ousted Ukraine’s pro-Kremlin president and Russia annexed Crimea.

Kiev and its Western backers accuse Russia of funnelling troops and arms to back the separatists. Moscow has denied the claims despite evidence to the contrary. – Rappler.com