Jun 21, 2019 6:27 AM PHT
Agence France-Presse
Facebook Twitter Copy URL
Copied
The two men have had a rocky relationship since Trump walked out of a G7 summit in Quebec last June 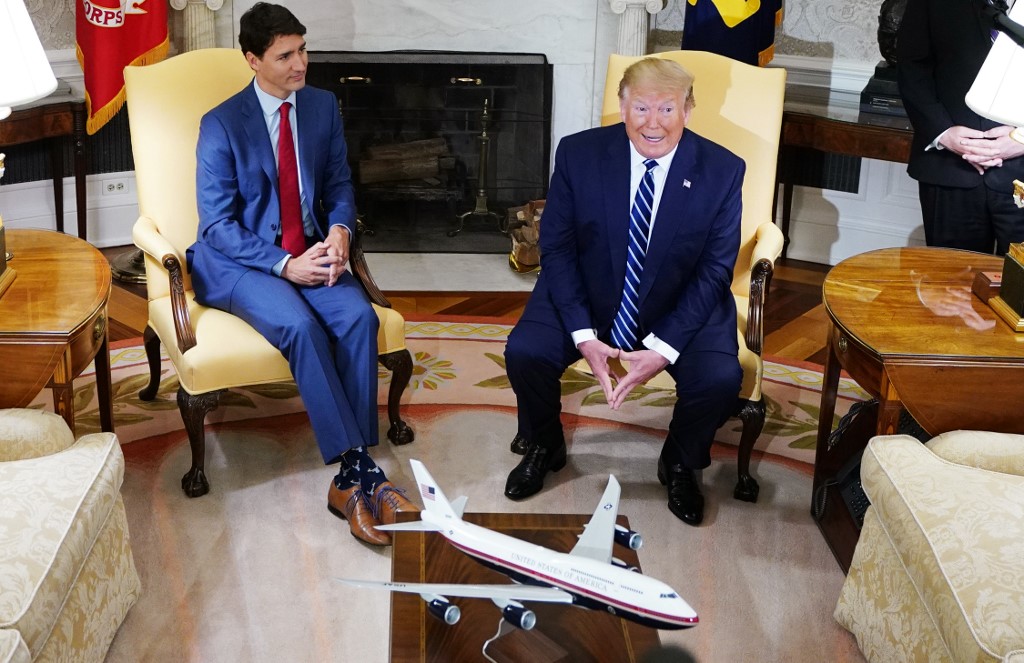 The two men have had a rocky relationship since Trump walked out of a G7 summit in Quebec last June, but are keen for the trade deal, known as the USMCA, to kick in soon.

“It means a lot of jobs for our country, a lot of wealth for all 3 countries,” Trump said alongside Trudeau in the Oval Office.

“This brings us into a position where we’re not competing with each other, we’re competing against the world.”

After the meeting, the White House issued a statement saying “both leaders affirmed their strong support for the swift passage of the agreement in their two countries.”

Mexico’s legislature ratified the accord, which was struck last year, on Wednesday. Canada has yet to follow suit, but the real question mark hangs over the US Congress.

“With over $2 billion of cross border trade every single day, we can’t overstate how important free trade is to the Canada-US relationship,” Trudeau told reporters after the meeting.

“Millions of people and businesses depend on a strong economic partnership between our two countries to make ends meet.”

Democrats, who control the lower house of Congress, have expressed concern over worker protections and other elements of the USMCA, which replaces the previous regional agreement NAFTA.

Trudeau, who met with US House Speaker Nancy Pelosi during his visit, said he respects the US process, and will answer any questions from American lawmakers.

While Trump has repeatedly called on legislators to give their approval, his relations with Democratic leaders in the House of Representatives are at rock bottom.

Further complicating the situation is the looming presidential election in which Trump is expected to face a tough fight after a first term that has left the country deeply polarized.

“We have an election coming up, but I think Nancy Pelosi will do the right thing,” Trump said at his meeting with Trudeau.

Trudeau, who faces his own federal elections in October, clashed repeatedly with Trump last year, with the two countries briefly engaging in a trade war over steel and aluminum.

At the 2018 G7 hosted by Canada, Trump left early without signing the joint declaration and called Trudeau “weak.”

On Thursday, Trump said that he did not foresee more trade wars – provided Canada and Mexico stick to the rules on what is called transshipping. This is when a country disguises exports of a product by sending it to a market via a third country.

“There won’t be transshipping. If there is, I’ll call Justin, he’ll take care of (it),” Trump said.

The White House suggested Canada and the United States see eye to eye on Trump’s tough push to get China to reform its international trade policies.

“They discussed the importance of upholding the rule of law and holding China accountable for its unfair economic activities,” the White House said.

In the Oval Office, Trump also offered to intervene in the case of two Canadians held in China in what is widely seen as retaliation for the arrest in Canada of a senior executive from controversial tech giant Huawei.

“Anything I can do to help Canada I will be doing,” said Trump, who will hold talks with Chinese President Xi Jinping next week at a meeting in Japan. “I would at Justin’s request.”

So far, Mexico leads the 3 huge countries in getting USMCA on board. The vote on Wednesday was overwhelmingly positive, reflecting the fact that the deal and the similar NAFTA agreement that it replaces have made Mexico a trading powerhouse.

The 3 countries signed the USMCA on November 30 after a year of tough negotiations triggered by Trump’s insistence on replacing NAFTA, which he called “the worst trade deal ever made.”

US Trade Representative Robert Lighthizer said he was confident there would be progress on ratification in “the next couple of weeks.” – Rappler.com