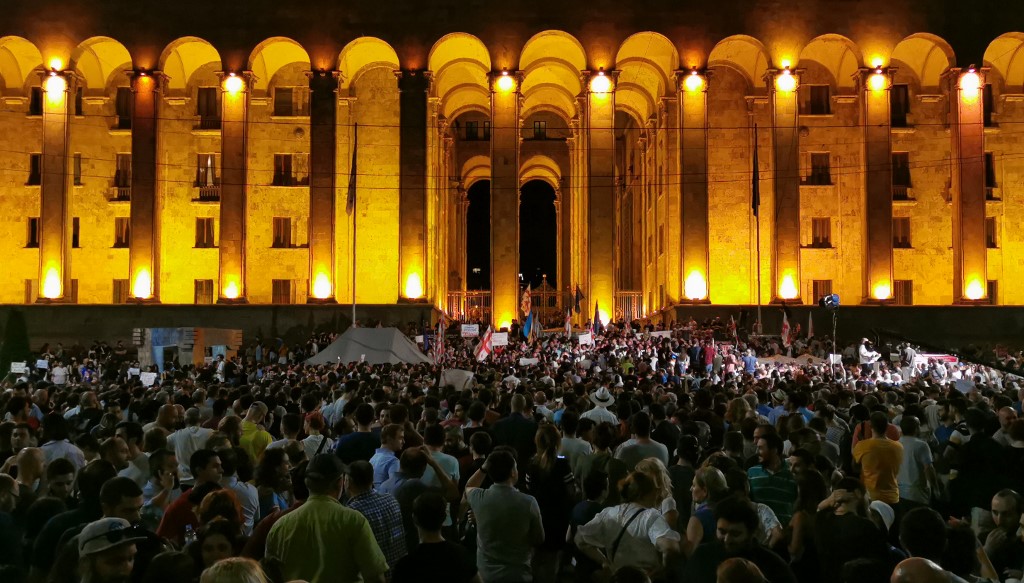 TBILISI, Georgia – The head of Georgia’s parliament quit Friday, June 21, after at least 240 people were injured in a police crackdown on mass protests, which erupted over a controversial address to lawmakers by a Russian MP.

Opposition leaders have vowed to hold demonstrations until parliament is dissolved and snap elections are held.

Rallies broke out in the capital Tbilisi on Thursday, June 20, after a Russian lawmaker addressed parliament from the speaker’s seat – a deeply controversial move in a country at loggerheads with Moscow.

Police fired rubber bullets and tear gas at crowds, leaving at least 160 demonstrators and 80 officers injured according to the health ministry.

The use of force in the pro-Western ex-Soviet country has sparked an international outcry, while the Kremlin condemned the protests as “Russophobic provocation.”

The presence of Russian MP Sergei Gavrilov in parliament brought a backlash in Georgia, which in 2008 fought and lost a brief but bloody war with Moscow over the breakaway regions of Abkhazia and South Ossetia.

Ahead of planned parliamentary polls next year, opposition groups also seek to capitalize on discontent with the ruling Georgian Dream party and its oligarch leader Bidzina Ivanishvili over the failure to kick-start a stagnant economy.

The United Opposition alliance has demanded snap parliamentary polls and the resignation of the interior minister.

“Peaceful mass protest will continue until these demands are met,” its leader Grigol Vashadze told Agence France-Presse, adding that a fresh rally would start at 7 pm (GMT 1500) on Friday.

About 10,000 protesters gathered outside parliament on Thursday afternoon after Gavrilov addressed a forum of lawmakers from predominantly Orthodox countries.

Police pushed back demonstrators when they attempted to enter the parliament courtyard, but the rally remained largely peaceful until midnight when officers launched a violent crackdown.

Georgian and foreign journalists were among those injured, according to reports. The health ministry said 102 people were being treated in hospital Friday for their injuries.

Human Rights Watch criticized the use of tear gas and rubber bullets “against thousands of non-violent protesters.”

Amnesty International called for an “immediate, thorough and independent investigation into use of force by riot police” including against easily identifiable journalists.

“But this can’t justify anti-state actions, calls to storm parliament and overthrow the government,” she said in a statement Thursday as she cut short a trip to fellow ex-Soviet republic Belarus.

Oligarch Ivanishvili – widely believed to be calling the shots in the country – said he “fully shares the sincere outrage of Georgians” over the invitation to the Russian representative.

Mass protests are relatively common in Georgia, where tens of thousands rallied last year over alleged irregularities in a presidential election.

A 2003 “Rose Revolution” pushed out the country’s Soviet-era leadership and brought in reformer Saakashvili, who served until 2013 and now lives in self-imposed exile as a Ukrainian citizen.

Relations between Georgia and its Soviet-era master Russia have long been fractured over Tbilisi’s bid to join the European Union and NATO.

The confrontation culminated in a five-day war in August 2008.

The Russian army swept into Georgia – bombing targets and occupying large swathes of territory – after Tbilisi launched a military operation against South Ossetian separatist forces who had been shelling Georgian villages.

After the war, which claimed the lives of hundreds of soldiers and civilians from both sides, Moscow recognized South Ossetia and another separatist region, Abkhazia, as independent states where it then stationed permanent military bases.

Tbilisi and its Western allies have denounced the move as an “illegal military occupation.” – Rappler.com