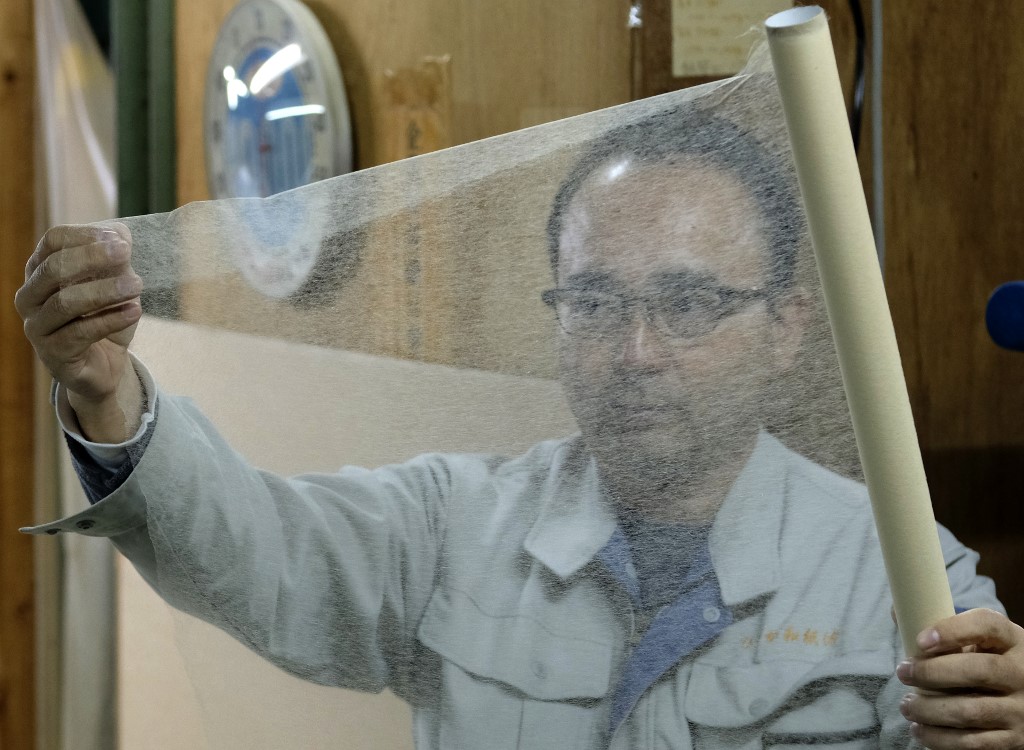 HIDAKA, Japan – Once an indispensable part of daily life in Japan, ultra-thin washi paper was used for everything from writing and painting to lampshades, umbrellas, and sliding doors, but demand has plunged as lifestyles have become more westernized.

Despite its 1,300-year history and UNESCO Intangible Cultural Heritage status, washi paper is struggling to attract consumers and the market value has dropped by more than 50% in the past two decades.

But at a small workshop in western Japan, Hiroyoshi Chinzei, a fourth-generation traditional paper maker, creates washi with a unique purpose that may help revive interest – both at home and abroad.

Chinzei’s product, the world’s thinnest paper, has helped save historical documents at major museums and libraries – including the Louvre in Paris, the British Museum and Washington’s Library of Congress – from decay.

“Washi paper is more flexible and durable” than what Japanese refer to as “western paper”, which disintegrates into tiny pieces when it becomes very old, the 50-year-old told AFP.

The traditional hand-made paper is manufactured from plants called kozo, or mulberry, which has fibres that are much longer than materials used for paper in the west such as wood and cotton.

“Old Japanese books from the seventh or eighth century remain in good condition… thanks to the fibres of the kozo plants,” the washi maker told AFP at his small factory in Hidaka, a village 640 kilometers (400 miles) southwest of Tokyo.

‘Wings of a mayfly’

The papermaking process begins with steaming the kozo plants and peeling off the bark, which is then boiled until soft, while impurities are removed by hand in clear water.

The fibres are then beaten and mixed with glue and water, before being placed on a wooden screen.

This screen is then dipped repeatedly in water with the fibres and shaken to spread the liquid evenly to make a sheet of paper, a technique which requires years to master.

Because washi is hard to break, damaged, old documents can be reinforced by attaching a piece of washi or sandwiching them between two sheets of the paper, Chinzei explained.

For documents, transparency is key to be able to see the text, meaning the thinner the washi, the better.

Chinzei’s washi, a type called tengu-joshi paper also known as “the wings of a mayfly,” is 0.02 millimeters thick and weighs 1.6 grams per square meter.

This compared to a standard sheet of photocopy paper, which is about 0.09 millimeters thick and weighs 70 grams per square meter.

“It’s a mesh-like paper mainly made with fibers… It’s as thin as human skin,” Chinzei said.

Using both machines and hand-made techniques passed down for generations, the firm can create ultra-thin paper, which is also used by conservationists to restore and protect cultural objects.

One such conservationist, Takao Makino, carefully applies washi with a brush onto golden sticks representing the halo of a Buddhist statue estimated to be around 800 years old.

Makino said he used washi for the first time in 2007 to protect the surface of one of the two main statues at Tokyo’s historic Sensoji Temple.

“The surface was damaged and peeled off. So we covered all of it (with washi) to contain the damage,” the 68-year-old said.

“The history proves washi is very durable… The material is pure, strong and lasting. It’s reliable.”

The production of the Japanese paper peaked in the Edo period between the 17th and late 19th centuries but declined as papermaking was mechanized.

Now, due to the westernization of Japan, the washi market is shrinking again, Chinzei said.

“We have no tatami rooms and almost no space to display a hanging scroll in the current lifestyle,” he said.

“Washi used for those things are now gone.”

According to the industry ministry, the total value of handmade washi dropped to 1.78 billion yen in 2016 from 4.15 billion yen in 1998, while that of washi for calligraphy and shoji sliding screens fell to 5.86 billion yen from 25.1 billion yen.

Chinzei didn’t plan on taking over his family trade and went to business school in Seattle to study finance.

“But I came back… because I felt responsible for passing the baton to the next generation,” he said, hoping to find ways to expand the market.

The volume of washi used for restoration is still small, but it’s been shipped to more than 40 countries and Chinzei is hopeful interest will grow.

He explained: “For restoring cultural assets and as a canvas for art… I think washi has the potential to be used more in the world of art.” – Rappler.com