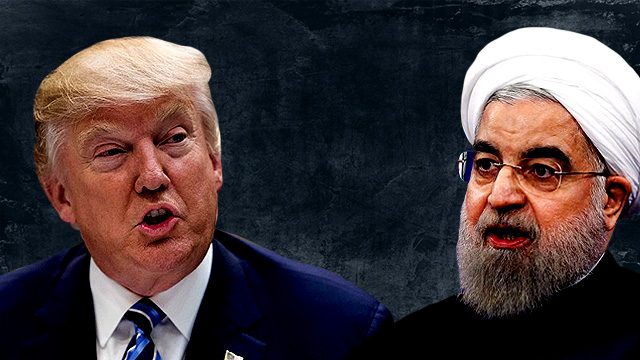 WASHINGTON DC, United States – President Donald Trump said Wednesday, June 26, he does not want a war with Iran but warned that if fighting does break out, it “wouldn’t last very long,” even as Iran’s president tried to tamp down soaring tensions.

Trump also hinted that any conflict would be waged with air strikes, saying there would be no US boots on the ground.

His remarks came after Iranian President Hassan Rouhani tried to rein in the crisis between the two archfoes, saying that Iran “never seeks war” with the United States.

Washington has ratcheted up crippling economic sanctions on Tehran after the Islamic Republic’s forces shot down an unmanned US drone in the Gulf region last week, following a series of attacks on oil tankers that Washington blamed on Iran.

In an interview on Fox Business News, Trump was asked if America is going to go to war with Iran.

In the current crisis with Iran, Trump’s tone has vacillated between tough or conciliatory – talking up US military might and saying all options are on the table, or offering Tehran talks on renegotiating the 2015 multi-party nuclear deal that Trump withdrew from last year.

That step is widely seen as the genesis of steadily declining relations between the two countries over the past year.

Iran has responded by saying it will “resolutely” abandon more commitments under the nuclear deal with world powers on July 7.

But Iran’s own stance also has been mixed: while the country’s supreme leader Ayatollah Ali Khamenei vowed his country would remain unbowed by US “insults,” Rouhani adopted a more conciliatory approach.

“Iran has no interest to increase tension in the region and it never seeks war with any country, including (the) US,” the president said, quoted by state news agency IRNA.

Trump said last week he cancelled an air strike against Iranian targets at the last minute, saying a military response which could have resulted in more than 100 deaths on the Iranian side was not proportionate to the downing of an unmanned US drone.

The high-stakes showdown in the Gulf between the longtime rivals has triggered a flurry of diplomatic activity as world leaders scramble to prevent a war that would massively disrupt oil flows and shake the global economy.

Rouhani spoke earlier by phone with his French counterpart Emmanuel Macron and told him Iran has “always been committed to regional peace and stability and will make efforts in this respect.”

Trump is also expected to discuss Iran with Russian President Vladimir Putin, who has close diplomatic ties with Tehran, on the sidelines of the G20 summit in Japan on Friday, June 28.

Iraqi President Barham Saleh added his voice to the warnings against a fresh regional conflict that would have serious repercussions for his own war-torn country.

“We have had 4 decades of challenge and turmoil. We do not want to be embroiled in another war,” he said at Chatham House, the Royal Institute of International Affairs think-tank in London.

“We cannot afford our country to be dragged into conflict,” he said.

Asked on Tuesday, June 25, about a possible exit strategy should conflict break out, Trump said, “You’re not going to need an exit strategy” and said he “would love to be able to negotiate a deal if they want to. If they don’t want to, that’s fine too.” – Rappler.com