Jun 27, 2019 10:32 PM PHT
Agence France-Presse
Facebook Twitter Copy URL
Copied
The court throws out the case lodged by ex-general Prabowo Subianto, saying he did not prove he lost the April vote because of widespread cheating and voter fraud 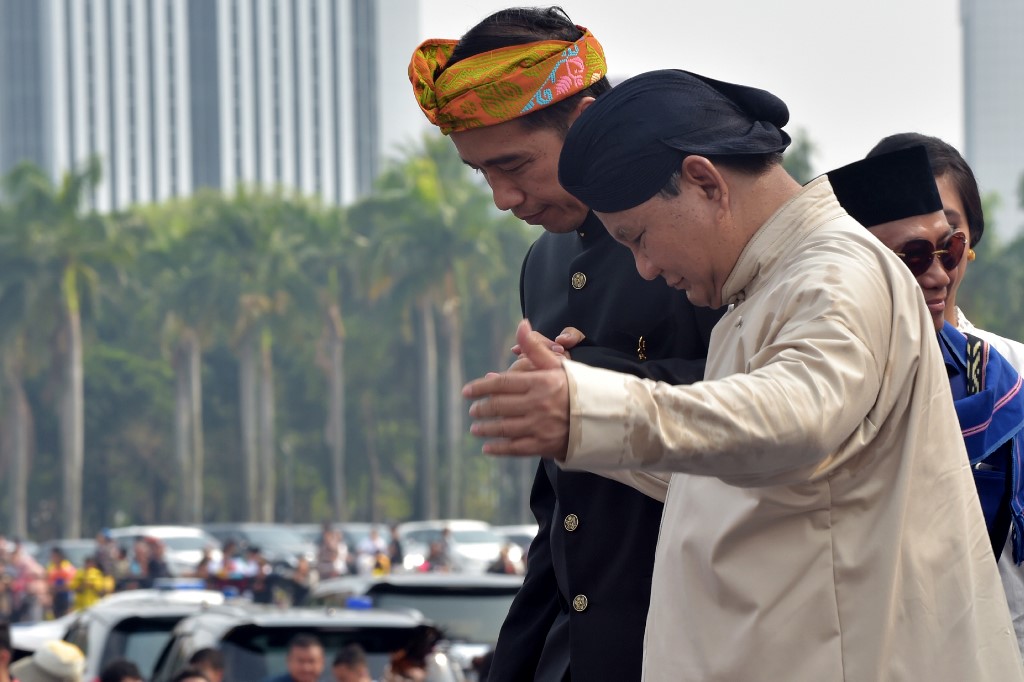 The court threw out the case lodged by ex-general Prabowo Subianto, saying he did not prove he lost the April vote because of widespread cheating and voter fraud, allegations that sparked deadly rioting in Jakarta.

“The plaintiff’s case is legally groundless,” said chief Justice Anwar Usman. “We reject (his) demand in its entirety.”

In the course of a hearing that stretched over 9 hours, the panel painstakingly described many of the allegations – including vote buying and that biased civil servants favored Jokowi – as baseless.

The court, which also questioned the quality of the evidence and the credibility of witnesses, said voter-fraud claims were the responsibility of Indonesia’s elections supervisory agency and beyond its remit.

Prabowo claimed that the election in the world’s third-biggest democracy was plagued by “systematic, structured and massive” electoral fraud that cost him victory.

His lawyers sought to overturn the official results that declared Jokowi the winner with 55.5% of votes, against Prabowo’s 44.5%.

After the ruling, Prabowo said he would consider his options.

“This ruling is very disappointing for us and our supporters but as has been agreed we will comply with and follow the constitution,” he said in a televised address.

“I will consult with my legal team,” he added.

Prabowo, who lost a similar court battle in 2014 when Jokowi defeated him, has little recourse, according to constitutional law expert Refly Harun.

“If the claim is rejected then it’s game over” for Prabowo, he said before the court’s ruling.

Prabowo supporter Daeng Wahidin was among a few thousand people gathered outside the court for the verdict, but police barricades prevented them getting near the building.

“The state can make its decision, but I won’t accept Jokowi as president,” the 45-year-old Wahidin told Agence France-Presse.

“I think he was elected through a fraudulent system.”

Some 47,000 police and army personnel were deployed around the court and other parts of central Jakarta amid fears of more unrest, but there was little sign of violent demonstrations.

Last month, peaceful protests against the official result by Prabowo supporters erupted into two nights of street battles between police and rioters, leaving 9 people dead and hundreds injured in the capital’s worst violence in years.

Indonesian police have been in the spotlight after videos surfaced that appeared to show officers beating protesters.

There are also questions about how the demonstrators – including a 15-year-old high school student – died.

This week, Amnesty International called for an independent probe into what it called “grave human rights violations” by police against protesters – including beatings and “torture” – and allegations that they were behind the killings of demonstrators.

Some of the dead were reported to have gunshot wounds. Police have insisted they did not shoot live rounds, but instead used rubber bullets, water cannon and tear gas to push back the crowds.

Meanwhile, several Prabowo allies have recently been arrested, including former army general Kivlan Zen over his alleged links to the Jakarta riots.