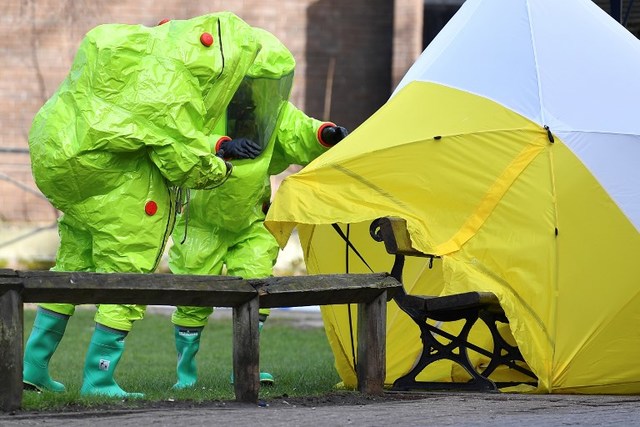 Russia denies involvement in the Skripal case and calls other allegations against the GRU – including its attempted hacking of the world’s chemical weapons watchdog in The Hague last year –politically motivated.

The findings “shed light on the likely chain of command for this (and other) GRU overseas operations, with one coordinating senior officer communicating with headquarters in Moscow while the team on the ground receive limited to no new instructions,” the Bellingcat report said.

“Evidence obtained by us on other international operations involving the same team suggests that this is a stable GRU operational model.”

Britain’s Metropolitan Police said it could not comment on an “ongoing investigation.”

British officials have identified the two Russians suspected of delivering the nerve agent to Salsbury as GRU agents Alexander Mishkin and Anatoly Chepiga.

Both men entered Britain using false passports and were captured on CCTV footage walking around the southern English town shortly before Skripal and his daughter Yulia were found slumped over on a park bench.

They fell into comas but survived and have since gone into hiding.

Mishkin and Chepiga later told Russian television that they were tourists who went to Salsbury to look at the local cathedral.

Western intelligence agencies suspect that the Kremlin ordered Skripal’s killing in retribution for his past exposure of Russian spies.

Bellingcat discovered in February that a GRU agent named Denis Sergeev – alternatively spelled as Sergeyev – was also in Britain at the same time.

The website found that Sergeev was in Bulgaria during the 2015 poisoning of a local arms dealer who suffered similar symptoms to Skripal’s.

Bulgaria has asked Britain and Russia for cooperation after reopening that case.

Joint findings by the BBC and Bellingcat detail Sergeev’s movements and mobile phone communications while in London in March 2018.

The BBC’s report established that Sergeev was a major general – a rank just t3 below that of an army commander.

“The involvement of a GRU major general would indicate the unusually high importance of the operation,” Bellingcat wrote.

The BBC found that Sergeev used messaging apps such as WhatsApp and Telegram to communicate with both the two Russians in Salsbury and his Moscow commander.

Bellingcat said Sergeev’s Moscow contact was using an unregistered mobile phone card that “does not produce a regular ‘footprint’ left by regular numbers.”

The BBC’s Russian Service separately reported that Sergeev and his wife “listed the address of the GRU training academy as their own home on an official registry.”

Russian President Vladimir Putin told the Financial Times in an interview published on Thursday that he viewed “treason (as) the gravest crime possible.”

“I am not saying that the Salisbury incident is the way to do it … but traitors must be punished,” Putin told the newspaper. – Rappler.com