Thousands protest in Brazil in support of justice minister 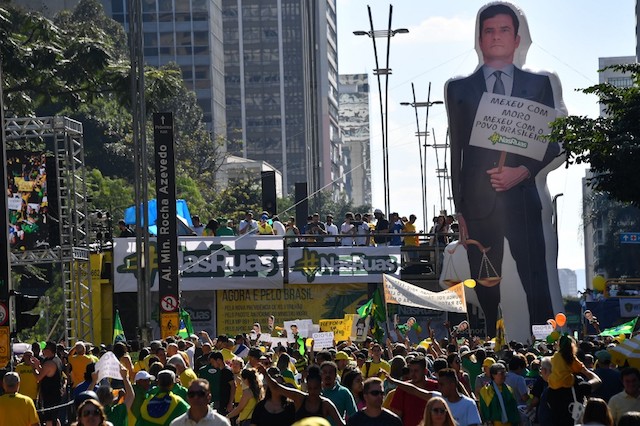 RIO DE JANEIRO, Brazil – Thousands protested in Brazil on Sunday, June 30,  in support of Justice Minister Sergio Moro, who is battling claims he conspired with prosecutors on his anti-corruption drive to keep former leader Luiz Inacio Lula da Silva from another presidential run.

Moro, who was a powerful judge before joining President Jair Bolsonaro’s cabinet in January, has faced calls for his resignation over leaked chats purportedly showing he worked with prosecutors in the so-called Car Wash probe to keep Lula, a popular leftist, out of the 2018 presidential race.

Demonstrators dressed in Brazil’s national colors of yellow and green took to the streets in 88 cities, news website G1 reported, including the capital Brasilia, Rio de Janeiro and Sao Paulo, to show their support for Moro, who is considered a hero by many Brazilians fed up with corrupt leaders.

The protesters also demanded Congress approve the government’s ambitious overhaul of the bloated retirement system. Bolsonaro has warned it will bankrupt the country if changes are not adopted.

Turnout, though, appeared to be lower than in recent protests for and against Bolsonaro’s administration.

“I think minister Moro is fundamental to everything that is going well in this country. Show me one person before him who could make people believe, in whom we could place our trust,” Nelson de Oliveira Filho, 70, told Agence France-Presse at the Sao Paulo march.

Bolsonaro tweeted his congratulations to the protesters, while Moro thanked supporters who “believe in our work.”

“Hackers, criminals, or malicious publishers will not alter these fundamental truths,” he said on Twitter.

In the latest messages published by The Intercept investigative website, prosecutors expressed concern that Moro had a personal and political agenda in the probe and were unhappy over his appointment to the far-right government, which they feared would undermine the credibility of the investigation.

Moro has questioned the authenticity of the leaked chats and dismissed claims that he showed bias in the Car Wash cases.

He recently told a Senate committee that he had been the victim of “revenge” over his anti-corruption efforts.

No one has been untouchable in the Car Wash probe, which began in 2014 and upended Brazilian politics by uncovering large-scale looting of state oil company Petrobras.

Scores of top players across the political spectrum as well as business figures have been taken down.

But critics say Moro – who handed Lula his first conviction in 2017 for money-laundering and taking bribes, effectively ending both his election hopes and decades of center-left rule – targeted the former president and his popular Workers Party (PT) most of all.

The Supreme Court last week postponed debate on whether Moro had been impartial, after rejecting a petition to free Lula.

Lula, who led Brazil through a historic boom from 2003 to 2010, has denied all the corruption charges against him.

He has long argued that they were politically motivated to prevent him from competing in the 2018 election, ultimately won by Bolsonaro. – Rappler.com