Jul 2, 2019 3:46 PM PHT
Agence France-Presse
Facebook Twitter Copy URL
Copied
The semi-autonomous financial hub is thrown into crisis by weeks of demonstrations over a bill that would allow extraditions to the Chinese mainland, with the issue becoming a lightning rod for resentment towards Beijing 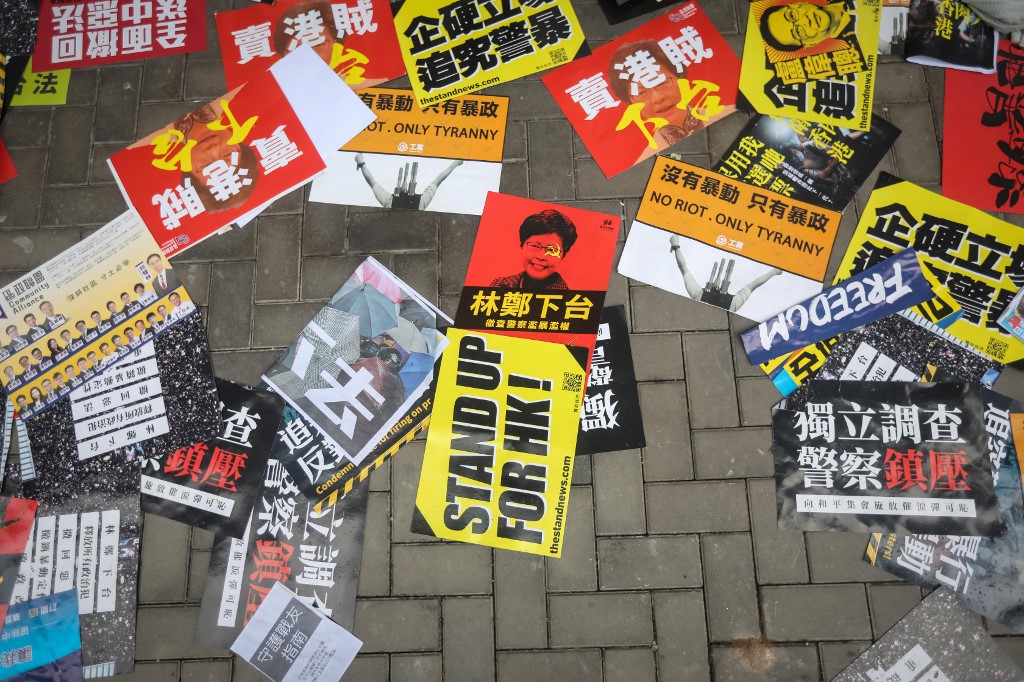 HONG KONG, China – Hong Kong Tuesday, July 2, grappled with the aftermath of a night of unprecedented anti-government protests which saw parliament ransacked, as Beijing called for a criminal probe into the unparalleled challenge to its authority.

The semi-autonomous financial hub has been thrown into crisis by weeks of demonstrations over a bill that would allow extraditions to the Chinese mainland, with the issue becoming a lightning rod for resentment towards Beijing.

On Monday – the 22nd anniversary of the city’s handover to China – anger spilled over as groups of mostly young, hardline protesters, breached the legislative council.

They hung the city’s colonial-era flag in the debating chamber, scrawled messages such as “Hong Kong is not China” on walls, and defaced the city’s seal with spray-paint.

Police charged into the building shortly after midnight to retake control.

The events pose an unprecedented challenge to Chinese leader Xi Jinping, and on Tuesday, Beijing wasted no time in asking Hong Kong to investigate the “criminal responsibility of violent offenders”.

Hong Kong has been rocked by massive protests over the past 3 weeks. The rallies – including a huge pro-democracy march on Monday – have been largely peaceful while calling on the city’s Beijing-appointed chief executive Carrie Lam to resign.

But they have failed to win concessions, with Lam refusing to permanently shelve the extradition law or step down, and by Monday some hardline protesters appeared to have reached breaking point, and stormed the legislature.

Lam – whose approval ratings are at a record low – condemned “the extreme use of violence”, describing the vandalism as “heartbreaking and shocking”.

Pro-democracy lawmaker Eddie Chu, who was stopped from entering his office, said police told him the building was “a crime scene”.

Legislative council president Andrew Leung, whose portrait was among those defaced by protesters, said major meetings were now cancelled until October.

“Our security systems, our fire services, our lifts… need to be tested before we can resume any meetings”, the pro-Beijing politician said.

Under the terms of the 1997 handover from British to Chinese rule, Hong Kong enjoys rights and liberties unseen on the mainland. But protesters accuse Beijing of reneging on that deal with the help of unelected leaders.

Activist Joshua Wong, who was the face of the city’s 2014 pro-democracy demonstrations, told reporters the protests were a response to “the tyranny…(and) imperial rule of Beijing and the Hong Kong government”.

On Monday, Washington voiced support for the protesters, with President Donald Trump saying they were “looking for democracy”.

“Unfortunately, some governments don’t want democracy”, he added, in an apparent swipe at Beijing.

“A zero-tolerance policy is the only remedy for such destructive behavior”, the Global Times daily wrote in an editorial.

“They are gestures of defiance rather than a genuine political action,” he said, warning they would likely “be seized upon by Beijing and by the Carrie Lam administration as justification for a crackdown”.

“Violence can’t change the people’s attitude, only reason will,” he said.

But clean-up volunteer Blue Wong said she was “angry with the government for pushing the young generation to such a stage”.

“I won’t criticize or judge the youngsters. Even though their actions are violent, their hearts are gentle”, she said.

“They are fighting for a better Hong Kong.” – Rappler.com