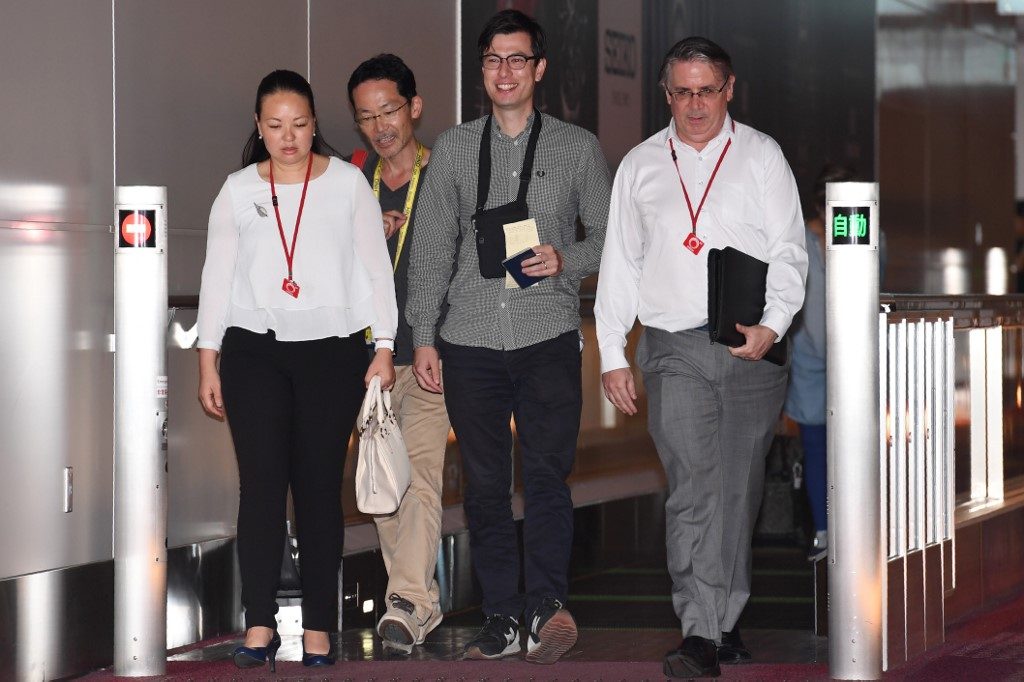 Facebook Twitter Copy URL
Copied
Alek Sigley declines to answer questions on his arrival in Tokyo, but smiles broadly as he walked through the airport

TOKYO, Japan – A 29-year-old Australian student held in North Korea said Friday, July 5, he was planning to “return to normal life” after being freed and flying to Japan but offered no details of his detention.

Alek Sigley, who disappeared without a trace around June 23 prompting a week of deep concern about his fate, said he was “okay” but declined to disclose why he was held and how he was treated.

Sigley, one of just a handful of Westerners living and studying in North Korea, emerged suddenly in Beijing on Thursday afternoon, July 4, where he told reporters he felt “great”.

Hours later, he flew to Tokyo where his wife lives, declining to answer questions on his arrival but smiling broadly as he walked through the airport.

A statement released by representatives of his family on Friday said he had been reunited with his wife Yuka and would not be conducting any interviews or holding a press conference.

“I just want everyone to know I am OK, and to thank them for their concern for my well-being and their support for my family over the past week,” the statement said.

“I intend now to return to normal life but wanted to first publicly thank everyone who worked to ensure I was safe and well.”

Sigley specifically thanked Sweden’s envoy to North Korea, who helped negotiate his release because Australia does not have diplomatic representation in Pyongyang.

But the statement gave no indication of why Sigley was held, how he was treated or why he was released. It said he would not make any further comment “at this time or later”.

Sigley’s release was announced on Thursday by Australia’s Prime Minister Scott Morrison, who told lawmakers the student was “safe and well” after his release.

On Friday Australia’s Home Affairs Minister Peter Dutton cautioned him against returning to the isolated North.

“My advice will be pretty clear – I would stay in Japan. I would go back to South Korea. I would come back to Australia. All of those would have to be better options before he returns to North Korea,” Dutton told broadcaster channel Nine.

Trump was intimately involved in the case of University of Virginia student Otto Warmbier, who was imprisoned during a tour of the authoritarian state in 2016.

Doctors said Warmbier suffered severe brain damage while in detention, fell into a coma and died days after arriving back in the United States, aged 22.

Sigley was much more familiar with the country and spoke fluent Korean.

He ran tours to North Korea and a number of social media sites, which usually had a stream of apolitical content about life in one of the world’s most secretive nations.

His blog posts focused on everyday Pyongyang – everything from the city’s dining scene to North Korean app reviews – and he married his wife there last year. – Rappler.com