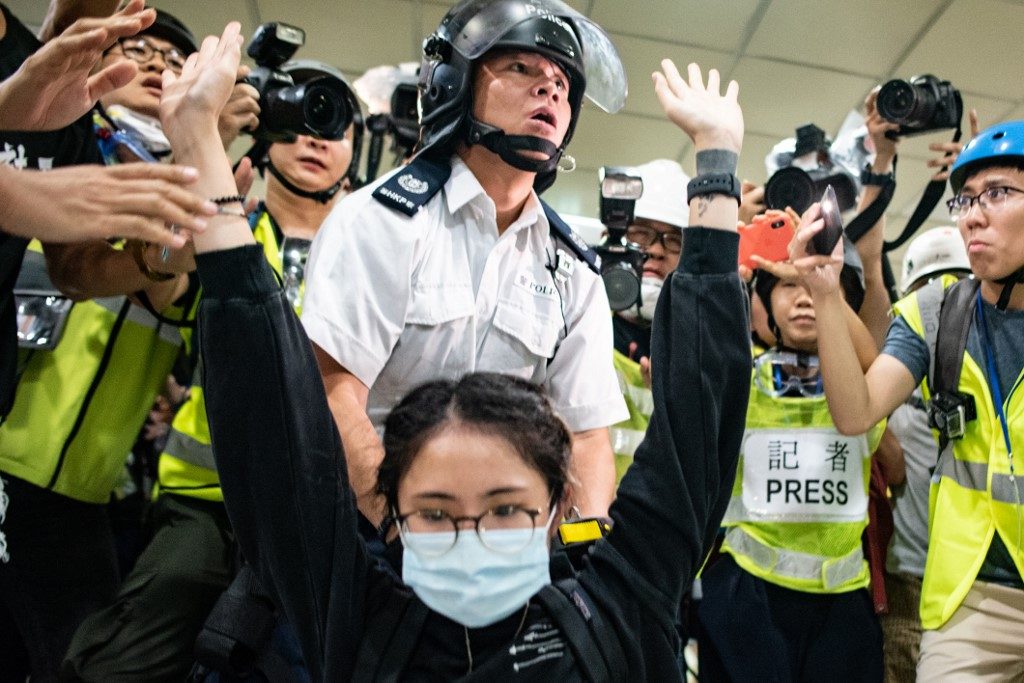 HONG KONG – Anti-government protesters who fought police inside a Hong Kong shopping mall were “rioters”, the finance hub’s pro-Beijing leader said Monday, July 15, as she threw her support behind the city’s beleaguered police force following another weekend of clashes.

Police used pepper spray and batons against small groups of protesters, who responded by hurling umbrellas, bottles and other projectiles, in a night of fresh violence in the international hub.

Both officers and protesters were injured in the chaotic melee which left bloodstains on the floor and at least 28 people needing hospital treatment.

“They were committed to the duties, and also very professional and restrained. But they were wantonly attacked by rioters – I think we can really describe them as rioters,” Lam told reporters.

Hong Kong has been rocked by more than a month of huge largely peaceful protests – as well as a series of separate violent confrontations with police — sparked by a law that would have allowed extraditions to mainland China and other countries.

The bill has since been suspended, but that has done little to quell public anger which has evolved into a wider movement calling for democratic reforms, universal suffrage and a halt to sliding freedoms in the semi-autonomous hub.

Lam’s use of the word “rioters” will likely infuriate protesters, who have balked at that description.

They have accused police of using disproportionate force and demanded the designation be retracted.

“Instead of seeking reconciliation, she (Lam) turned to the police for support, by initiating hatred and bloodshed,” democracy activist Joshua Wong wrote in a tweet.

Police commissioner Stephen Lo said early Monday more than 40 people were arrested during Sunday’s clashes — which took place in Sha Tin district — and that an officer had part of his finger bitten off.

A hospital authority spokesperson said 28 people had sought emergency treatment and seven men remained in hospital Monday morning, including two who were in serious condition.

The spokesperson did not provide a breakdown of injuries among police and protesters.

But Lam said more than 10 officers were injured during the clashes and six were still in hospital on Monday.

Her administration has made little headway in defusing the city’s worst crisis in decades.

Protesters are demanding the bill be scrapped entirely, an independent inquiry into police use of tear gas and rubber bullets, an amnesty for those arrested, and for Lam to step down. – Rappler.com