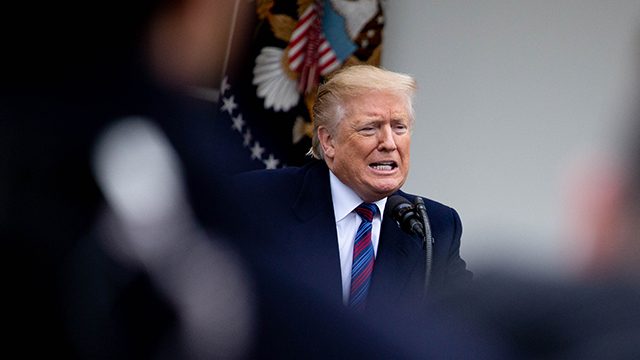 Facebook Twitter Copy URL
Copied
NBC News says it found the 1992 video from Trump's Palm Beach, Florida club in its archives, showing the real estate tycoon welcoming Epstein to the party and appearing to discuss women dancing to music in front of them

WASHINGTON, DC, USA – A new video surfaced on Wednesday, July 17, showing President Donald Trump partying with Jeffrey Epstein and a bevy of cheerleaders at the Mar-a-Lago club, despite Trump’s claims he barely knew the financier accused of assaulting underage women.

NBC News said it found the 1992 video from Trump’s Palm Beach, Florida club in its archives, showing the real estate tycoon welcoming Epstein to the party and appearing to discuss women dancing to music in front of them.

Trump is seen dancing with the women, cheerleaders for the Buffalo Bills professional football team, and, at one point, pointing to one and apparently saying to Epstein, “she’s hot.”

The video was filmed for an NBC talk show at the time, “A Closer Look,” for an episode about the lifestyle of Trump, who at the time was newly divorced from his first wife Ivana Trump and a year from marrying his second, Marla Maples.

Trump’s predilection for parties with attractive women at the time is well-known, and none of the women in the Mar-a-Lago video appeared to be underage.

But he has denied any close relationship with Epstein, who pleaded guilty in Florida in 2008 to a state charge of soliciting prostitution from a minor, and was arrested in New York on July 8 on charges of sexually exploiting dozens of underage teenage girls.

Trump has admitted knowing Epstein, and in a 2002 interview called him a “terrific guy” who “likes beautiful women as much as I do.”

But last week he said they haven’t spoken to each other for 15 years after a falling-out.

“I knew him like everybody in Palm Beach knew him,” Trump said. “I was not a fan.” – Rappler.com