Warren and Sanders vs moderates: Liberals under fire in 2nd debate 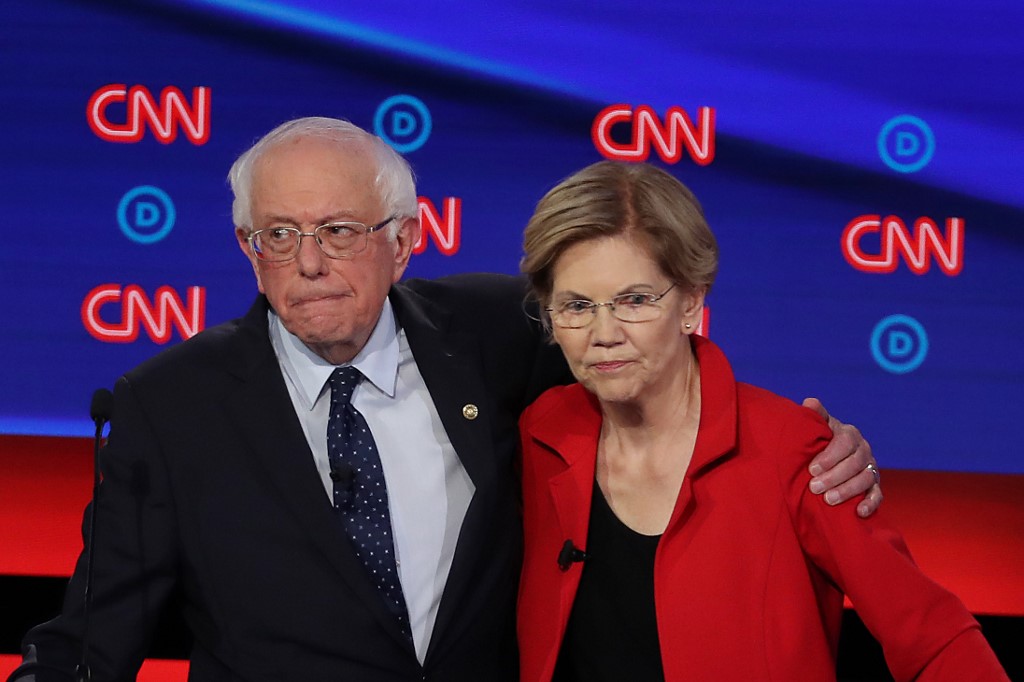 DETROIT, USA – Leading Democratic presidential hopefuls Bernie Sanders and Elizabeth Warren got an earful from moderate rivals on the debate stage Tuesday, July 30, as the liberal senators defended their progressive policies on healthcare and immigration against surprisingly energetic attacks.

The sharp ideological battle lines shone through immediately in the second debate of the 2020 Democratic primary race, with lesser known candidates taking sharp digs at their political elders at center stage and warning that pushing for radical change could ensure President Donald Trump’s reelection.

Warren immediately demanded “big, structural change” and warned that political “spinelessness” against Trump will leave intact a “rigged system that has helped the wealthy and well-connected and kicked dirt in the faces of everyone else.”

But she and Sanders faced dramatic pushback, particularly from ex-congressman John Delaney who delivered a scathing rebuke to their “fairy tale economics” that risk bankrupting the economy.

Sanders and Warren, Delaney said, are peddling “bad policies like Medicare for All, free everything, and impossible promises that will turn off independent voters and get Trump reelected.”

Tuesday marked the most sustained, comprehensive assault yet on the big-idea platforms of the progressive candidates by middle-of-the-road rivals since the 2020 campaign took shape earlier this year.

The debate features 20 candidates over two nights in Detroit, Michigan, a battleground state that Trump snatched from Democrats in 2016.

The stakes are sky high.

The debate is likely to winnow the sprawling field, perhaps by as much as half, ahead of the next one in September as the party seeks its best nominee to challenge Trump.

Underperformers like Senator Amy Klobuchar and Colorado ex-governor John Hickenlooper, both polling at below 2%, scrambled for breakout moments that resonated enough with voters to keep their struggling campaigns alive.

Without one, several lower-tier candidates will have little justification for staying in the race.

“I have bold ideas, but they are grounded in reality,” asserted Klobuchar, who wants a public option in the US healthcare system.

Biden has managed to maintain his pole position, with around 32% support according to a poll average compiled by RealClearPolitics.com.

Warren and Sanders are essentially tied for second, at about half Biden’s support.

Sanders offered a staunch defense of his Medicare for All bill.

But while the self-proclaimed Democratic socialist seeks to whip up a “political revolution,” Hickenlooper offered a retort to Sanders’s plan that would abolish private health insurance for hundreds of millions of people.

Expanding healthcare ought to be “an evolution, not a revolution,” Hickenlooper said.

Warren’s plan to decriminalize border crossings by undocumented migrants brought a searing response from Montana Governor Steve Bullock, on the 2020 debate stage for the first time, who warned of “playing into Donald Trump’s hands” by dramatically changing immigration policy.

“A sane immigration system needs a sane leader, and we can do that without decriminalizing” such crossings, he said.

The 10 candidates appeared far more unified when it came to addressing Trump’s “racism,” or acknowledging the immediacy of contending with climate change.

“We’ll call his racism out for what it is, and also talk about its consequences,” said ex-congressman Beto O’Rourke, noting how Trump’s repeated racial attacks are contributing to divisiveness in America.

South Bend, Indiana Mayor Pete Buttigieg, who has earned kudos for his calm, intellectual demeanor, sought to remain above the fray on several clashes including climate. He hit out hard, though, at Trump’s immigration crisis as a combination of “cruelty and incompetence.”

After moderate rivals hammered away at big, pie-in-the-sky policies like tuition-free college, Warren lost her patience.

“I don’t understand why anybody goes to all the trouble of running for president of the United States to talk about what we really can’t do and shouldn’t fight for,” she said, in one of the biggest applause lines of the night.

Critics warn of the risks of driving the party too far leftward ahead of the election.

But as moderates on stage tamped down the prospect of expanding government to address issues like tuition-free college, an angry Marianne Williamson, an author who has never run for public office, fired off a zinger: “I almost wonder why you’re Democrats.” – Rappler.com