Cathay to comply with China rules over Hong Kong protests 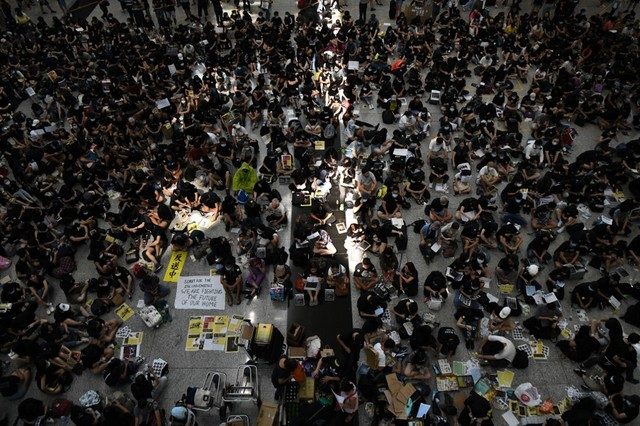 Facebook Twitter Copy URL
Copied
'We have zero tolerance for inappropriate behaviour that affects the safe operation of our flights and the service experience we provide to our customers,' says Cathay Pacific CEO Rupert Hogg

HONG KONG – Cathay Pacific said Saturday, August 10, it will comply with new rules from China banning staff who support Hong Kong’s protesters from working on flights to the mainland or through its airspace.

The Hong Kong carrier also confirmed it had suspended a pilot charged with rioting and fired two ground staff for misconduct apparently related to the protest movement that has engulfed the city. (READ: Hong Kong protesters stage airport rally to win visitor support)

China’s aviation regulator on Friday, August 9, had ordered the airline to hand over identifying information for staff on mainland-bound flights starting Sunday.

It warned that staff deemed to support Hong Kong’s “illegal protests” were banned from flights landing in mainland China or travelling through its airspace.

CEO Rupert Hogg said in a message to employees on Saturday that the carrier was obliged to comply with the new rules set out by the Civil Aviation Administration of China (CAAC).

“Cathay Pacific Group’s operations in mainland China are key to our business. In addition to flying in and out of mainland China, a large number of our routes both to Europe and to the USA also fly through mainland China airspace,” Hogg wrote.

“We are therefore legally required to follow CAAC regulations and, as is the case with any notices issued by any regulatory authority having jurisdiction over us, we must and will comply,” he added.

Cathay appears to have become a target of Beijing’s ire after some of its crew joined protests and media reported one of its pilots had been charged with rioting. (READ: U.S. upgrades Hong Kong travel warning as airport protest planned)

Pro-democracy protesters have staged two months of increasingly violent protests in the semi-autonomous financial hub, which Beijing has viewed as a challenge to its control.

The carrier’s chairman John Slosar earlier this week defended his staff’s right to freedom of thought, saying “we certainly wouldn’t dream of telling them what they have to think about something.”

But Hogg cautioned staff about their behavior.

“Though people may share different views, it is essential that we all respect each other, our customers and members of the public,” he wrote.

“We have zero tolerance for inappropriate behaviour that affects the safe operation of our flights and the service experience we provide to our customers,” he added.

Cathay separately confirmed to reporters that it had suspended at the end of July a pilot who has been accused of rioting after allegedly participating in the Hong Kong protests.

It also said two airport ground staff had been fired, without specifying why, but local media reported that they were accused of leaking the travel details of a Hong Kong police soccer team that was travelling to the mainland. – Rappler.com