Last week, the Chinese government released a report in an attempt to justify its ongoing treatment of China’s Uyghur Muslim minority. It’s the latest assault in a decades-long struggle by the Chinese government to re-establish the narrative of Xinjiang, its far north-west province, where currently up to 1.5 million Uyghurs are detained in concentration camps.

Among its many claims, the 6,900-word white paper, published by the State Council Information office, says Islam was introduced to Uyghur culture by force. It has been criticized by scholars and Uyghur activists as an attempt to rewrite Uyghur history.

We went through the white paper, entitled “Historical Matters Concerning Xinjiang,” chapter by chapter, to take a closer look at the reality behind some of its claims.

First, a bit of context: the Uyghurs are an ethnic minority in China with Turkic roots. They have their own language, which shares similarities with Turkish and Uzbek, and uses the Arabic script. Uyghurs have their own music, dances, traditional clothing and customs which are distinct from Han Chinese traditions. And Uyghurs are a mostly Muslim ethnic group, following the teachings of the Quran and attending mosques. But many of these facts about Uyghur culture and history present a challenge to China’s attempt to assimilate and clamp down on the vast Silk Road region of Xinjiang. For decades, the threat of separatism, terrorism and Uyghur independence from China has been a source of worry for the People’s Republic of China.

Many Uyghurs outside China call their homeland “East Turkestan” and over the years, the struggle for Uyghur independence has often lapsed into violence – from both sides. The report attempts to redress the challenge of Uyghur separatism and Muslim identity in China, stating that “it is a matter of principle to correctly treat historical issues.”

We took a closer look at some of the report’s claims:

“Islam is neither an indigenous nor the sole belief system of the Uyghur people.” Historical Matters Concerning Xinjiang, Page 3

This is a common propaganda line in Xinjiang. Uyghurs in China are often told to embrace their “indigenous” heritage and shed the more devout aspects of Islamic practice. For instance, women in Xinjiang are restricted from wearing headscarves, and men are not allowed to grow long beards, while having Islamic texts in the home is enough to warrant an arrest.

In reality, Islam has been a part of Uyghur life for around a thousand years. “At a certain point it becomes indigenous, right?” said Darren Byler, a scholar and anthropologist at the University of Washington. Byler describes how the Chinese propaganda machine often tries to “separate culture from religion.” 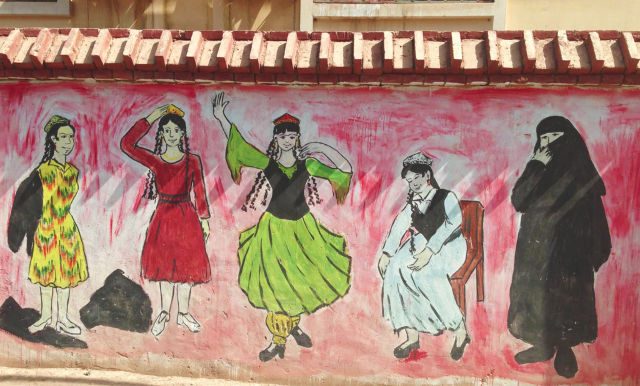 Take a look at this wall mural, taken in Xinjiang in 2017, depicting Uyghur women. The mural encourages the woman to shed their conservative Islamic dress and return to the traditional Uyghur way of life.

“The Uyghur conversion to Islam was not a voluntary choice made by the common people, but a result of religious wars and imposition by the ruling class.” Historical Matters Concerning Xinjiang, Page 15

This line of the white paper is perhaps the strongest justification the report makes for the current crackdown on Uyghurs in Xinjiang.

“This narrative suggests China is liberating Uyghurs from themselves, and from Islam,” Byler said. “If you think of Islam as something imposed on the Uyghurs, it helps to think you’re liberating them.”

There were some military aspects to the arrival of Islam into Uyghur life – but, Byler says, “no Uyghur today would think of it as an imposition. It’s something they’re born into and feel a part of.”

“Xinjiang fully respects and protects freedom of religious belief as stipulated in the Constitution of the People’s Republic of China. Xinjiang respects citizens’ freedom to believe in, or not to believe in, any religion.” Historical Matters Concerning Xinjiang, Page 14

This is not the first time the white paper suggests that Uyghurs are free to practice Islam. But the reality of the situation is quite different. “We did not have the slightest freedom to teach our children Islam,” said Nurjamal Atawula, a Uyghur exile from Hotan, in Xinjiang, who escaped the region in 2016. 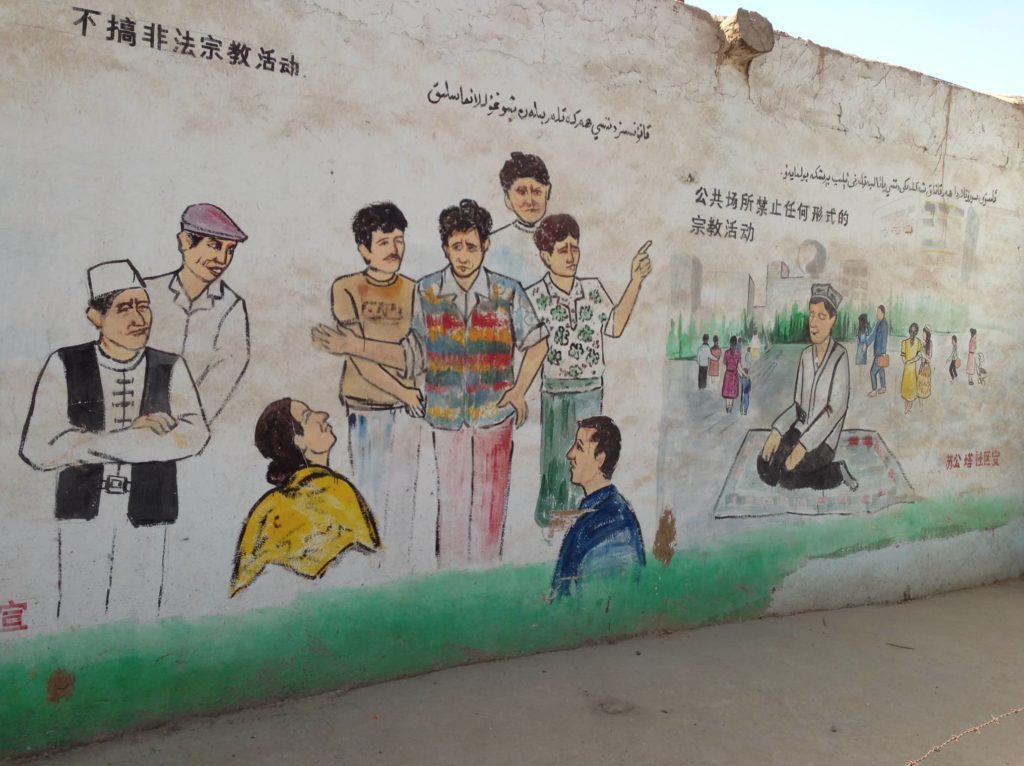 All across Xinjiang, mosques are being razed to the ground. In a joint report by the Guardian and Bellingcat in May, an investigation found that since 2016, more than two dozen Islamic religious sites have been partially or totally destroyed.

“People do not dare to practice any religious activities, even at home,” said Alip Erkin, a Uyghur-Australian media activist who runs Uyghur Bulletin, a social media channel tracking current events in Xinjiang. “If you pray at home that could easily send you to the internment camps. I saw photos of my mother without a headscarf, I have never seen her without a headscarf in public. She’s a housewife. She barely goes outside. She was banned from wearing that piece of cloth.”

Elsewhere in China, religious persecution is also intensifying. Christians are another group being targeted, with churches closing, with many pastors put under tight surveillance, and with others being jailed. A new state-approved annotated translation of the Bible is due to be published, which will encourage a “correct understanding” of the text.

“Hostile foreign forces and separatist, religious extremist and terrorist forces that have colluded to distort history and tamper with facts run counter to the trend of our times and will be cast aside by history and the people.” Historical Matters Concerning Xinjiang, Page 17

In March 2019, China’s state-run outlet, People’s Daily, released a video series called “Embracing a New Life” in response to global criticism of the so-called re-education program. Six slickly-produced videos show young Uyghur men and women who have been reformed and deradicalized by the re-education camps, which they call “schools.”

“When I grew up, my mind was full of extreme thoughts,” says 20-year-old Humargul Abdulsattar in the video. “I watched extremist content and violated cyber security laws.” Akida Arislan, 28, said describes browsing social media and finding “many of the posts were about religious extremism,” and “like a sheep” she followed suit. “I was reborn in the school,” she says.

The videos show the young Uyghurs laughing and joking with their friends at these centers, gaining new skills, taking selfies in malls after their studies, and celebrating Uyghur culture. “I would have been the next one to set fires and kill people,”  Zupiya Abdulrishit, 26, says, from the corridor of one of these re-education centers. “I started to slowly draw myself out of that world.”

Uyghurs outside China responded to the video as a product of China’s propaganda machine. “It’s the government telling the people that this is education,” said Abduweli Ayup, a Uyghur poet and exile who spent nine months in Chinese detention in 2013, where he was tortured, assaulted and forced to endure hard labor. “They keep telling us that the Uyghur people have an infected mental disease and they want to treat this disease. They treat the Uyghur people as patients.”

“To survive and develop, religions must adapt to their social environment. The history of religions in China shows that only by adapting themselves to the Chinese context can they be accommodated within Chinese society.” Historical Matters Concerning Xinjiang, Page 14

According to Chinese state media, Xinjiang’s vast so-called “re-education” program was created with this aim in mind: to assimilate Uyghurs into the Chinese tradition. It has been used – and continues to be used – as a justification to imprison up to 1.5 million Uyghurs.

According to the few Uyghurs who have managed to escape, conditions in the camps are closer to that of prisons than the “vocational training centers” advertised in the People’s Daily videos.

Gulbahar Jalilova, a former inmate of the camps, described being monitored by guards 24-7. “If they found out we were speaking in Uyghur, they would punish us.” The inmates were told to speak Chinese, and to thank the Chinese Communist Party for their clothes, food and shelter. “We must develop and encourage secular, modern and civilized ways of life, and abandon backward and outdated conventions and customs.” Historical Matters Concerning Xinjiang, Page 15

The current crackdown on Uyghurs has been escalating since 2013. It coincided with the advent of social media in Xinjiang, when Uyghurs were exposed to global Islamic influences on the internet.

This current program to ostensibly create a more civilized society in Xinjiang is part of a broader aim to shoehorn Uyghurs into Han Chinese nationalism. That’s why across the region, Uyghurs are forced to wear Han traditional clothing and sing communist songs.

In the New York Times this month, scholar and Xinjiang expert Adrian Zenz described how “the party’s current re-education drive is an upgraded version of the Cultural Revolution. This campaign, too, seeks to achieve ideological control by eradicating alternative ideological and belief systems.”

“For the ethnic cultures in Xinjiang to prosper and develop they must keep pace with the times, be open and inclusive, engage in exchange and integration with other ethnic cultures in China…” Historical Matters Concerning Xinjiang, Page 13

For decades, the Chinese government has encouraged ethnic integration in Xinjiang. In 1999, they launched a program called the Great Leap West – an ambitious economic undertaking to encourage migration of Han Chinese people to Xinjiang. It was a bid to bring Xinjiang closer to Beijing’s orbit by assimilating Uyghurs with Han people, changing Xinjiang’s ethnic composition, and creating more economic activity in the resource-rich region.

Miyesser Mijit, 29, a Uyghur activist in Istanbul, whose name has been changed to protect her family, remembers this migration well when she was growing up.

“A lot of Han Chinese came to East Turkestan [Xinjiang] to find work. They easily found jobs.” She remembers how Uyghurs in her family simultaneously had difficulty finding work, with recruiters turning them away. “At every opportunity, they would say, we need Han Chinese, we don’t need Uyghur people.”

In the fall of 2018, the government announced it was deploying 1.1 million Han Chinese local government workers to monitor and surveil Uyghurs inside their own homes. The program was called “Pair Up and Become Family.”

In the days after the publication of the white paper, Chinese media was quick to praise its publication, saying it clearly set out the right ideological path for Xinjiang. The state-run Xinhua headline ran, “help the world get to know Xinjiang better.”

The white paper was published in response to mounting pressure from governments around the world condemning China’s treatment of Uyghurs. – Rappler.com

Isobel is a filmmaker, radio reporter and multimedia journalist for Coda Story. A graduate of Columbia Journalism School, she specializes in covering disinformation, authoritarian technology, and the human stories beneath.