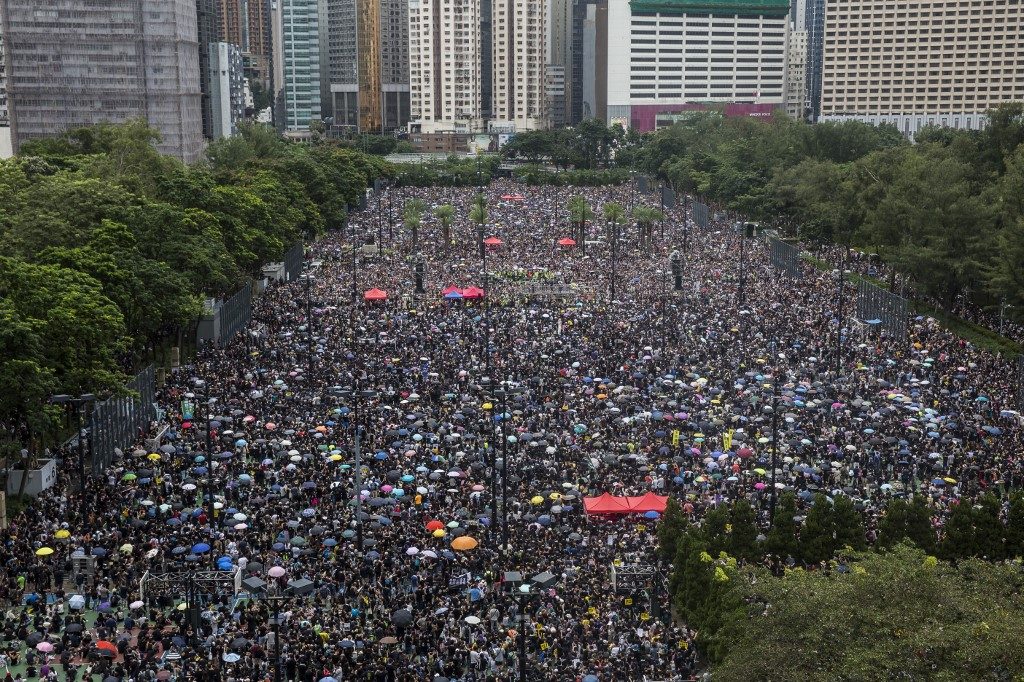 HONG KONG (3rd UPDATE) – A sea of democracy activists flooded the streets of Hong Kong Sunday, August 18, in a defiant show to the city’s leaders that their movement still pulls wide public support, despite mounting violence and increasingly stark warnings from Beijing.

Hundreds of thousands of protesters carrying umbrellas poured across the heart of Hong Kong island defying torrential rain and a police order not to march from a park where they had gathered earlier for a rally.

Weeks of demonstrations have plunged the financial hub into crisis, with images of masked black-clad protesters engulfed by tear gas during street battles against riot police stunning a city once renowned for its stability.

Sunday’s action, which organzsers the Civil Human Rights Front said drew more than 1.7 million in the largest rally in weeks, was billed as a return to the “peaceful” origins of the leaderless protest movement.

“It’s been a long day and we’re very tired, but to see so many people out in the rain marching for Hong Kong gives strength to everyone,” said Danny Tam, a 28-year-old graphic designer.

The unprecedented political crisis was sparked by opposition to a plan to allow extraditions to the Chinese mainland.

But protests have since morphed into a wider call for democratic rights in the semi-autonomous city.

Anger has been sharpened among protesters by the perceived heavy-handedness of the police who have used tear gas, baton charges and rubber bullets in incidents that have pinballed across social media.

“The police are doing things that are totally unacceptable,” said Yim, who like many of the protesters gave only one name.

“They are hurting citizens, they aren’t protecting us.”

Communist Party-ruled mainland China has taken an increasingly hardline tone towards the protesters, decrying the “terrorist-like” actions of a violent hardcore minority among the demonstrators.

Despite the near-nightly clashes with police, the movement has won few concessions from Beijing or the city’s unelected leadership.

The spiralling violence, which last week saw protesters paralyse the city’s airport, has tarnished a campaign that had taken pride in its peaceful intent and unpredictability – which demonstrators have tagged with the slogan “Be Water.” (READ: Hong Kong protesters face crucial weekend test after airport setback)

“We have our gear with us, but we hope not to use it,” said a 30-year-old identifying himself only as Man.

Late into the evening hundreds of masked protesters milled outside the government headquarters shouting “Reclaim Hong Kong, revolution of our times.”

China’s propaganda apparatus has seized on the unrest, with state media churning out a deluge of damning articles, pictures and videos.

State media also ran images of military personnel and armoured personnel carriers across the border in Shenzhen, prompting the United States to warn Beijing against sending in troops.

Analysts say any intervention by Chinese security forces would be a reputational and economic disaster for China.

But Hong Kong’s police are under intense pressure, stretched by flashmob protests.

A Hong Kong government spokesperson praised the police for handling “illegal acts with tolerance” and appealed to the protesters to “express their views in a peaceful and rational manner”.

Opinions among the protesters have diverged over the billowing violence, which has seen a small group of hardcore protesters using rocks, Molotov cocktails and slingshots against the police.

Some say the violence has driven the pro-democracy movement in an uncomfortable direction.

“But we have tried many times with peaceful approaches… I really hope the government can listen to us.”

Under a deal signed with Britain, authoritarian China agreed to allow Hong Kong to keep its unique freedoms when it was handed back in 1997.

But many Hong Kongers feel those freedoms are being chipped away, especially since China’s hardline president Xi Jinping came to power.

Beyond suspending the extradition bill, Beijing and city leader Carrie Lam have shown no desire to meet key demands such as an inquiry into police violence, the complete withdrawal of the bill and an amnesty.

Beijing has turned the screws on Hong Kong’s businesses, pressuring them to toe the line and condemn the protesters.

On Friday, Cathay Pacific announced the shock resignation of CEO Rupert Hogg after the carrier was excoriated by Beijing because some staff supported the pro-democracy protests. – Rappler.com