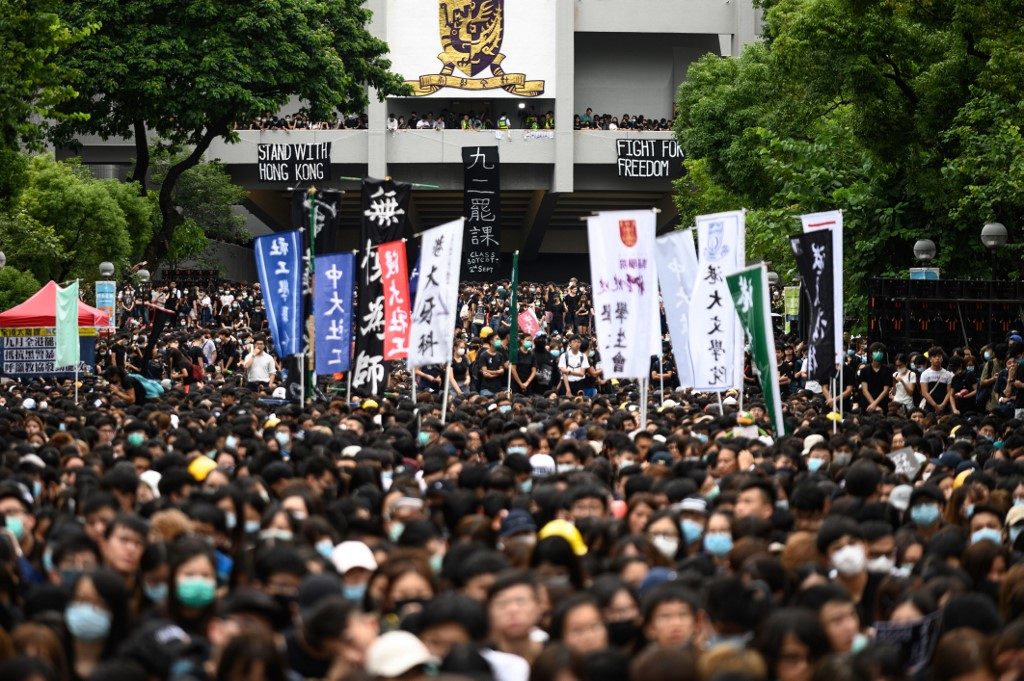 HONG KONG (UPDATED) – Thousands of black-clad students rallied in central Hong Kong Monday, September 2, at the start of a two-week university boycott, piling pressure on the city’s leaders to resolve months of increasingly violent anti-government protests that show no sign of easing.

Students have been the backbone of opposition to government plans to allow extraditions to China, a movement that has morphed into wider protests against the Beijing-backed territory’s unelected leadership.

Hundreds have been arrested in violent clashes with police, and an increasingly shrill Beijing has labelled protesters “terrorists,” with an editorial by China’s state news agency Sunday, September 1, warning “the end is coming.”

Chinese foreign ministry spokesman Geng Shuang said Monday the protests had “gone beyond the scope of freedom of assembly and demonstration.”

“They have evolved into extreme acts of violence, seriously challenging the legal system and social order of Hong Kong,” he told a press conference.

Hong Kong enjoys freedoms unseen on the Chinese mainland under the “one country, two systems” banner inherited following the handover from Britain in 1997, but locals fear those rights are being eroded.

On Monday, as universities reopened after the summer break, thousands of students skipped classes and gathered instead in central Hong Kong.

“Today is the first day of school, but I still want to come out,” a 19-year-old university student named Tommy told Agence France-Presse (AFP).

“I don’t think we will miss anything. This is also a form of learning.” “Hong Kong is our home…we are the future of the city and have to take up responsibility to save it,” said a 17-year-old secondary school student who gave her surname as Wong.

One nurse suggested the protest is doomed because China will never allow the Hong Kong government to concede to protester demands.

“But we still have to stand and say something. At least we have shown the world what is happening,” she told AFP, requesting anonymity.

Over the weekend the city witnessed some of the worst civic violence in decades as protesters lobbed bricks and petrol bombs at police, who responded with tear gas, water cannon and baton charges.

A day earlier hardcore protesters rampaged through the city center, setting fires and throwing petrol bombs at riot police in defiance of a ban on marching.

The images have fortified anger against the police, who protesters accuse of brutality.

Hong Kong’s security minister described protester violence as “on the verge of being out-of-control.”

“I call on the general public to reject violence, keep our society in order and safeguard the rule of law,” John Lee Ka-chiu told reporters.

Mak Chin-ho, an assistant commissioner of police, said 159 people had been arrested between Friday, August 30, and Sunday, aged from 13 to 58.

“All this pushes Hong Kong to the brink of great danger,” he told a press briefing.

Embattled city leader Carrie Lam has done little to directly address the crisis, save offer to form a largely derided “platform for dialogue.”

Her removal is one of the key demands made by protesters, who also want the extradition bill to be formally scrapped, and an independent inquiry into alleged police brutality.

The protesters want the city’s leader and all its lawmakers to be directly elected, scrapping the current system that heavily favors Beijing-backed candidates.

Hong Kong’s reputation as a stable place to do business has been shaken by the protests.