Trump to boast to UN about U.S. success, but troubles mounting 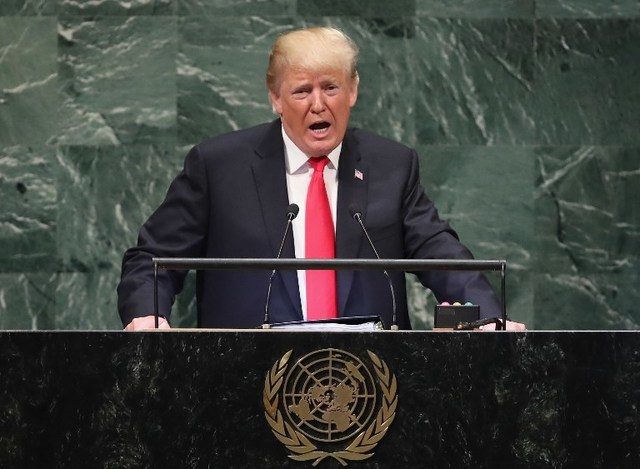 Facebook Twitter Copy URL
Copied
'We'll say the United States is the greatest country in the world,' says US President Donald Trump in a mini-review of his speech

UNITED NATIONS – United States President Donald Trump will stand before the United Nations (UN) on Tuesday, September 24, to declare his country top of the world. But with diplomatic troubles building, his annual boast may ring hollow.

Trump’s political brand is as well known inside the UN as his businessman version is to the rest of New York: brash, unabashedly self-promoting, and all about claiming the win.

“We’ll say the United States is the greatest country in the world. It’s never been stronger and it’s never been better,” he said in a mini-review of his speech.

Oh – and that Americans “certainly have one of the great presidents in our history.”

Trump’s declaration last year that he had “accomplished more than almost any administration in the history of our country” triggered laughter in the cavernous UN hall.

Headlines like “The Whole World Laughed at Trump” followed, to which Trump insisted that diplomats were chuckling with, not at him.

A year later, with Trump beset by setbacks from North Korea to Iran and Venezuela to China, will his Big Apple braggadocio get a better reception?

A senior administration official told reporters ahead of the assembly that Trump would work to “affirm America’s leadership role in the rules-based international system.”

But the US president prefers to go it alone, preferring bilateral deals to coalitions, negotiating with enemies, and clashing with friends.

While at the UN, he’ll meet separately with around a dozen leaders.

But of them, the only European representative currently on the list is Boris Johnson, the prime minister running the chaotic Brexit process of trying to pull Britain out of the European Union.

There will be intense scrutiny of a meeting on Wednesday, September 25, with Ukraine’s President Volodymyr Zelensky. Trump is alleged to have attempted to persuade the Ukrainian to investigate one of his 2020 presidential challengers, Joe Biden.

A larger-than-life figure, Trump believes that his personality enables him to succeed where conventional diplomacy fails.

He has tested this most spectacularly in North Korea, holding an unprecedented 3 summits with dictator Kim Jong-un to try and persuade him to abandon his flourishing nuclear weapons program.

However, Kim shows no signs of budging on the central demand, leaving Trump open to criticism that he has been played.

On the explosive standoff with Iran, Trump has taken the opposite route by piling pressure on the crumbling economy and seeking to wreck an international deal meant to defuse tension over the country’s nuclear industry.

Speculation is rife over whether he will order military strikes on Iran to respond against the bombing of Saudi oil facilities last weekend. Trump has left everyone guessing, announcing still more US sanctions on Friday, September 20, but so far resisting war.

In Afghanistan, Trump hoped for a big, dramatic win.

His diplomats spent months in painstaking negotiations over getting nearly all the last US troops out of the country after two decades of war.

But earlier this month, Trump tried to bring Taliban leaders over to the US for face-to-face talks, only to cancel the whole thing at the last minute.

On the economic front, Trump’s all-or-nothing battle with China has the whole world holding its breath.

As usual, Trump has sought to develop close relations with his counterpart, President Xi Jinping, but neither that friendship nor his aggressive use of tariffs has produced decisive results so far.

At the UN, the US president might want to consider the risks of his instincts to tear up the old rules books, said diplomacy expert Jeffrey Feltman at the Brookings Institution.

Because “if the US leaves a vacuum in the leadership of the UN, others will fill it.” – Rappler.com