Maria Ressa reminds journalists: An attack on one is an attack on all 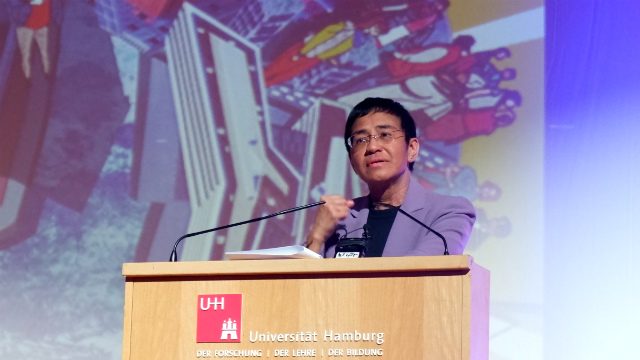 HAMBURG, Germany – Rappler CEO and executive editor Maria Ressa on Saturday, September 28, urged the public to do the right thing amid blatant undermining of press freedom and democracy around the world.

Speaking before 1,500 journalists during the 2019 Global Investigative Journalism Conference in Hamburg, Germany, Ressa warned that not addressing issues now would lead to further deterioration of democratic institutions.

“An attack on one is an attack on all,” she said. “If we don’t take the right steps forward, democracy as we know it is dead.”

Democracy around the world are suffering from attacks with the rise of populist authoritarian leaders. Human rights groups cite several instances, including the election of President Jair Bolsonaro in Brazil and the continuous attacks of President Rodrigo Duterte in the Philippines, as key features of this decline.

But perhaps one of the more visible manifestations is the blatant disinformation that networks use to throw dirt and distrupt the truth globally.

In her speech, Ressa cited the widespread disinformation and attacks against media not just in the Philippines but in other countries, and warned of huge consequences if remain unchecked.

Calling the battle for truth as “really the battle of our generation,” she said that the period now is the most crucial for any action to be taken.

“Never before has our profession demanded so much from us, courage,” Ressa said.

A journalist for more than 30 years, Ressa co-founded Rappler in 2012. She was former CNN bureau chief and ABS-CBN News executive.

Since rising to power in 2016, President Rodrigo Duterte has subjected Rappler and Ressa to threats, harassment, and intimidation over the news organization’s critical coverage of disinformation and the violent war on drugs, among others. (READ: LIST: Cases vs Maria Ressa, Rappler directors, staff since 2018)

Ressa warned that what Rappler is experiencing might manifest in other countries if necessary actions are not taken.

“If nothing changes, what happened to us is going to happen to you,” she said.

GIJC 2019, a 5-day event which attracted thousands of journalists from around the world, featured intense and incisive sessions on different topics of journalism.

These included reporting on sexual harassment, artificial technology, how to better deal with online research, and investigating corruption, among others.

But one of the key messages of the conference was the importance of collaboration not just among journalists but media outlets themselves. This, however, admittedly can be a heavy task considering that competition has been a long-term feature of media landscape worldwide, especially in the local level.

But in-between sessions in Hamburg, attendees took the time to discuss with colleagues on how to enhance cooperation and collaboration among media outlets.

This was what Ressa highlighted also in her speech as a way to counter efforts to destablize democracy and media in general. She urged urged journalists to do away with old definitions and collaborate with each other.

She also called for journalists to go beyond the comfort zone that is media and also keep an open channel with the academe, technology industry, and civil society, to protect facts.

“Seek what we have in common over what drives us apart because that’s the way the bad guys are working: They take a fracture line in our societies and pound it open to separate us into us vs them,” she said.

Beyond pooling resources together, accountability should be demanded from platforms that play a huge role in the onslaught of disinformation seen around the world.

Ressa called on the public to demand accountability from tech platforms because they are the ones who can do “something meaningful” against disinformation.

Technology, she said, serves as an accelerant amid rampant “fake news” given its massive reach and fast pace, adding that “a lie told a million times becomes a fact.”

For example, Facebook has been on the center of the controversy for being the platform of choice of groups and networks behind disinformation efforts. It has, however, repeatedly made actions that groups call detrimental to the battle for truth.

The Philippines, which is one of the countries with most Facebook users around the world, was tagged as the ideal petri dish for Cambridge Analytica – the controversial company that had accessed the data of millions of Facebook users and used these data for political campaigns.

Because of the situation, Maria pushed for a global database of disinformation networks to stop countries and companies from getting away with impunity.

“We need to seriously come together and fight because an attack on one is an attack on all,” Ressa said. “Power and bullies will never stop if you give in to them.” – Rappler.com