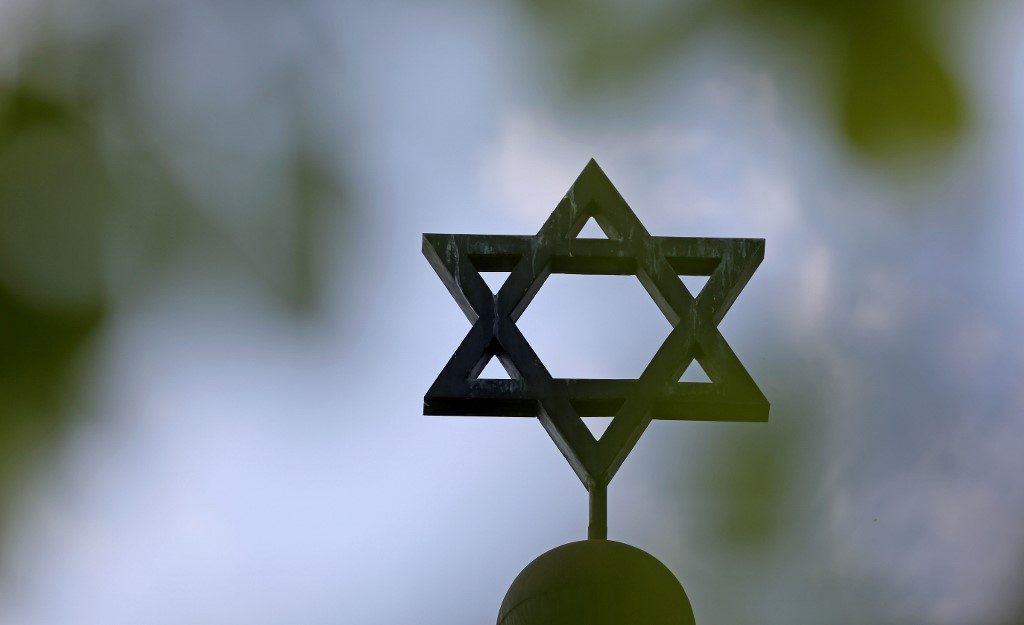 Facebook Twitter Copy URL
Copied
(UPDATED) One suspect was captured but with a manhunt ongoing for other perpetrators, security has been tightened in synagogues in other eastern German cities while Halle itself is in lockdown

HALLE (SAALE), Germany (UPDATED) – At least two people were shot dead in the German city of Halle on Wednesday, October 9, with witnesses saying a synagogue was among the gunmen’s targets as Jews marked the holy day of Yom Kippur.

One suspect was captured but with a manhunt ongoing for other perpetrators, security was tightened in synagogues in other eastern German cities while Halle itself was in lockdown.

“Early indications show that two people were killed in Halle. Several shots were fired,” police said on Twitter, urging residents in the area to stay indoors.

Police said the “perpetrators fled in a car”, adding later that one suspect had been caught.

Jewish community leader Max Privorotzki, who was in the Halle synagogue, told Stuttgarter Zeitung that “we saw through the camera of our synagogue that a heavily armed perpetrator wearing a steel helmet and rifle was trying to shoot open our door.”

“The man looked like he was from the special forces. But our doors held firm,” he said, adding that there was also an attempt to shoot open the gate to the neighboring Jewish cemetery.

“We barricaded our doors from inside and waited for the police,” he said, adding that “in between, we carried on with our service.”

Between 70 and 80 people were in the synagogue on a day when Jews around the world were marking one of the holiest days in the Jewish calendar, Privorotzki said.

Two people also suffered serious bullet wounds in the attack and were being operated on, a spokesman for the city’s hospital said.

Germany has been on high alert following several attacks in recent years, including some claimed by the Islamic State group, as well as neo-Nazi plots.

‘Hid in the toilet’

Anti-terrorist prosecutors confirmed that they were taking over the probe given “the particular importance of the case” which he said involved “violent acts that affect the domestic security of the Federal Republic of Germany”.

Bild daily reported that one of the two shot dead were killed in front of the synagogue, while a hand grenade was also flung into a Jewish cemetery.

Witness Conrad Roessler told news channel NTV he was in a Turkish restaurant about 600 meters (yards) away from the synagogue when “a man wearing a helmet and military uniform” tossed a hand grenade.

“The grenade hit the door and exploded,” he said.

“(The attacker) shot at least once in the shop, the man behind me must be dead. I hid in the toilet and locked the door.”

Police would not confirm the details, saying only that there were also kebab restaurants and churches in the area where the shooting took place.

An unauthenticated video circulating in German media showed a man wearing a helmet getting out of a vehicle before firing several shots in the air.

“It is terrible news from Halle and I hope very much that the police will manage to catch the perpetrator or perpetrators as quickly as possible so that no other person will be in danger,” Chancellor Angela Merkel’s spokesman Steffen Seibert told a news conference.

Luebcke’s killing has deeply shaken Germany, raising questions about whether it has failed to take seriously a rising threat from right-wing extremists.

Investigators have been probing the extent of suspect Stephan Ernst’s neo-Nazi ties and whether he had links to the far-right militant cell National Socialist Underground (NSU).

The former communist states in east Germany have also gained notoriety for their far-right extremists. Just last month, a neo-Nazi “terrorist” cell based in the eastern town of Chemnitz was put on trial accused of plotting a violent political uprising in Germany.

Interior Minister Horst Seehofer last month warned of the rising danger of the militant far right, calling it “as big a threat as radical Islamism”.

Seehofer said that police had uncovered 1,091 weapons including firearms and explosives during probes of crimes linked to the far right last year, far more than in 2017 when 676 were found.

Fears of a new Islamist attack were also revived on Monday, October 7, when a Syrian man hijacked a articulated lorry and smashed it into cars stopped at a traffic light in the city of Limburg, injuring several people.

The 32-year-old has been remanded in custody suspected of attempted murder and bodily harm as well as a traffic offense, Frankfurt prosecutors told Agence France-Presse. – Rappler.com