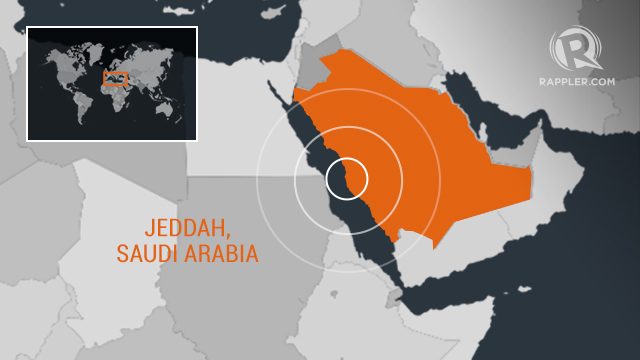 Facebook Twitter Copy URL
Copied
(UPDATED) The National Iranian Tanker Company says the hull of the Sabiti was hit by two separate explosions off the Saudi port of Jeddah, saying they were 'probably caused by missile strikes'

TEHRAN, Iran (UPDATED) – Suspected missile strikes hit an Iranian oil tanker off the Saudi coast on Friday, October 11, its owner said, the first Iranian vessel targeted since a spate of attacks in the Gulf Washington blamed on Tehran.

The National Iranian Tanker Company said the hull of the Sabiti was hit by two separate explosions off the Saudi port of Jeddah, saying they were “probably caused by missile strikes.”

In those attacks, two of Saudi Arabia’s biggest oil installations were hit, wiping out 5% of global production.

“After the attack on Saudi a few weeks ago…it’s not a matter of if we get new comparable events – but when, and how much.”

Nordea Markets analyst Thina Margrethe Saltvedt said it was not the particulars of the latest incident that were worrying traders but the fear of worse to come.

“The risk premium is rising…not because the tanker per se contains enough oil to squeeze the market, but the risk that this incident will be retaliated or more attacks would come either in Iran, Saudi Arabia or Iraq.”

The National Iranian Tanker Company said the hull of the vessel was hit by two separate explosions about 100 kilometers (60 miles) off the Saudi coast, which damaged two of its tanks on the starboard side.

It identified the tanker as the Sabiti and said the blasts were “probably caused by missile strikes” but denied media reports that they originated from Saudi territory.

“All the ship’s crew are safe and the ship is stable too,” NITC said, adding those on board were trying to repair the damage.

It added the ship is slowly moving back towards the Gulf.

Iran’s foreign ministry said the tanker was attacked “from a location close to the corridor it was passing, east of the Red Sea.”

Oil was leaking from the tanker into the waters of the Red Sea, it added.

“The responsibility of this incident, including the serious environmental pollution, falls on the perpetrators of this reckless act,” said ministry spokesman Abbas Mousavi, adding that investigations are continuing.

According to ship tracking service TankerTrackers, the Sabiti is fully laden with one million barrels and has declared the Gulf as its destination.

Pictures published by Iranian state television showed the ship’s deck without any outward signs of damage.

It comes after a spate of still unexplained attacks on shipping in and around the vital seaway to the Gulf involving Iran and Western powers.

Washington accused Tehran of attacking the vessels with mines, something it strongly denied.

There have also been seizures of both Iranian and Western-flagged vessels.

The United States has formed a naval coalition to escort commercial vessels through the Strait of Hormuz, the strategic choke point at the mouth the Gulf.

It has been joined by Australia, Bahrain, Britain, Saudi Arabia and the United Arab Emirates.

Friday’s incident is the first involving an Iranian ship since the “Happiness 1” broke down at about the same location in early May.

That ship was repaired in Saudi Arabia and held in the kingdom until July 21 when it was released.

Saudi Arabia severed diplomatic ties with Iran in 2016, after its missions in the country were attacked in demonstrations over the Sunni-ruled kingdom’s execution of prominent Shiite cleric Nimr al-Nimr.

The attack on the Iranian tanker comes ahead of a planned visit to Iran and Saudi Arabia by Pakistani Prime Minister Imran Khan, who is expected to make an effort to defuse tensions between Tehran and Riyadh.

China meanwhile called on all parties to “exercise restraint” in the “highly complex and sensitive” situation.

Iran has been locked in a standoff with the United States and its Gulf Arab allies since US President Donald Trump withdrew from a 2015 deal that gave it relief from sanctions in return for curbs on its nuclear program.

The British-flagged oil tanker Stena Impero arrived in Dubai late last month, after being detained with its crew in Iran for more than two months.

The seizure was widely seen as a tit-for-tat move after authorities in the British overseas territory of Gibraltar detained an Iranian tanker, since released over US objections.

At the height of the crisis, Trump ordered retaliatory strikes against Iran after the Islamic republic downed a US drone but called them off at the last minute. – Rappler.com