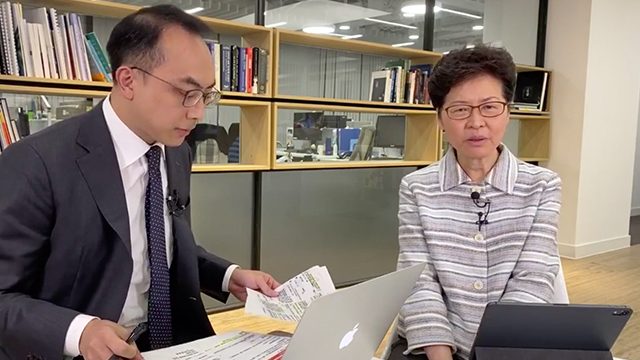 HONG KONG – Hong Kong’s embattled leader took to Facebook Live late Thursday, October 17, in a bid to reach out to citizens after months of political unrest – and the emoji count was far from kind.

Backed by Beijing, her administration has refused to grant any major concessions to protesters, who are demanding greater democratic freedoms and police accountability.

Angry faces significantly outnumbered hearts and likes left by viewers on the hour-long Facebook Live broadcast, while critics also used the comments section to pile on.

By the end of the session, in which a host chose from a series of pre-selected questions and some live ones, the angry face count stood at more than 9,400 compared to 2,100 likes and 632 hearts.

Lam defended her record and stuck to her oft-repeated talking points that she cannot give in to violent protesters and won’t be resigning.

“We need more dialogue and communication, more mutual understanding and tolerance,” she said.

She added that she was taken aback by the huge rallies.

“Nobody could predict that we would be facing such a huge storm,” she said.

Millions have taken to the streets this summer, initially against a now-dropped bid by its leaders to allow extraditions to the authoritarian Chinese mainland.

But after Beijing and Lam took a hard line, the movement snowballed into a broader push for democracy and police accountability.

Lam has previously stated a willingness to hold dialogue sessions with the public, but they have also got off to a rocky and limited start.

In late September she sat down with some 150 randomly selected members of the public for a live forum where questions critical of her government dominated.

Protesters also surrounded the venue and she was unable to exit for hours until the crowds dispersed. – Rappler.com