Facebook Twitter Copy URL
Copied
Prime Minister Boris Johnson is facing a desperate scramble for votes, as his Conservative government is well short of a majority in the lower chamber House of Commons

On October 17, Britain and the European Union reached a new divorce deal. British Prime Minister Boris Johnson said he had secured a “great new deal that takes back control,” while European Commission President Jean-Claude Juncker said it was a “fair and balanced agreement.”

LONDON, United Kingdom – London and Brussels may have struck a Brexit deal on Thursday, October 17, but it’s far from certain whether British lawmakers will back the agreement.

Prime Minister Boris Johnson is facing a desperate scramble for votes, as his Conservative government is well short of a majority in the lower chamber House of Commons.

MPs will debate his new agreement at a rare weekend sitting of parliament – only the fifth time since 1939 there has been a session in parliament on Saturday, October 19.

“The arithmetic is close but getting this deal through parliament is doable,” said Tim Bale, the deputy director of The UK in a Changing Europe think-tank.

“There is a pathway, even if it is a narrow one, to a deal.”

Johnson’s chances hinge on what 4 key groups decide to do. They are:

The DUP have already rejected the new deal and the ERG tends to follow their lead, despite positive noises from the group on Wednesday evening, October 16.

The House of Commons has 650 seats. But in practice there are 639 votes up for grabs.

The 7 MPs from the Irish republican party, Sinn Fein, do not take their seats, while the speaker and his 3 deputies – two Labour MPs and one Conservative – do not vote.

That means 320 votes are needed for an absolute majority.

Support for the deal that Johnson’s predecessor Theresa May struck with Brussels peaked at 286 at the third time of asking.

There are now a maximum 287 Conservative votes – if the hardline eurosceptic ERG faction back the new deal.

A clutch of ERG MPs always voted against May’s version.

The Conservatives’ DUP allies command 10 votes – but the Northern Irish party has said they cannot support the new deal.

Dom Walsh, a policy analyst for the Open Europe think-tank, said that without DUP support, the numbers were now “very, very tight.”

“It’s theoretically possible to get a deal through without the DUP, but staggeringly unlikely,” he tweeted.

By his calculations, Johnson would need to convince every ERG rebel, every former Conservative who voted for May’s deal (19), every Labour and independent MP who did so (9) plus 5 extra Labour MPs – just to get a majority of one. 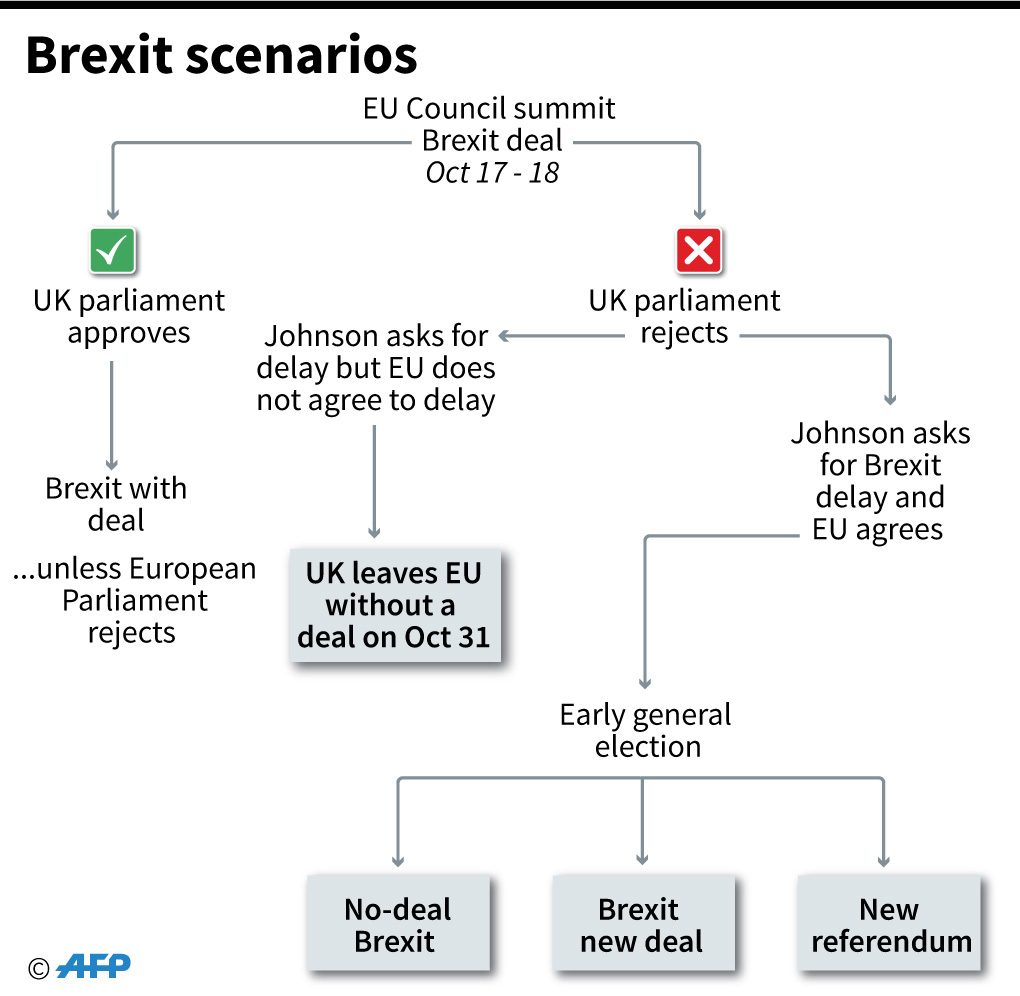 In early September, Johnson kicked out 21 Conservatives for voting against the government to stop a no-deal Brexit.

“They don’t owe Boris Johnson anything and have burned their bridges. But most of them wanted a deal and voted for one, and left to avoid no deal,” said Bale.

Parliament last held a Saturday session 37 years ago, after Argentina invaded the Falkland Islands, a British overseas territory, in the South Atlantic Ocean.

The main opposition Labour Party has 242 votes, the Scottish National Party has 35, while the Liberal Democrats have 19. All three have called for the deal to be rejected.

Bale said Brexit-reconciled rebel Labour MPs – typically from constituencies that heavily supported leaving the EU – would have to think about what punishment their party might inflict for backing a deal, and whether they could stomach handing Johnson a victory.

Constantine Fraser, a political analyst at investment research provider TS Lombard, said the parliamentary arithmetic was “somewhere between ‘extremely tight’ and ‘no’.”

“If it does pass, it will be by no more than a couple of votes.”

Fraser said the opposition might try to make the deal conditional upon a referendum – leaving on Johnson’s new terms versus staying in the EU – but “the numbers don’t look like they’re there for that either.” – Rappler.com