UK murder probe as 39 dead found in truck from Bulgaria

Oct 23, 2019 5:45 PM PHT
Agence France-Presse
Facebook Twitter Copy URL
Copied
(3rd UPDATE) All victims are pronounced dead at the scene in an industrial park in Grays, triggering revulsion among politicians and putting the spotlight on the shadowy people trafficking business 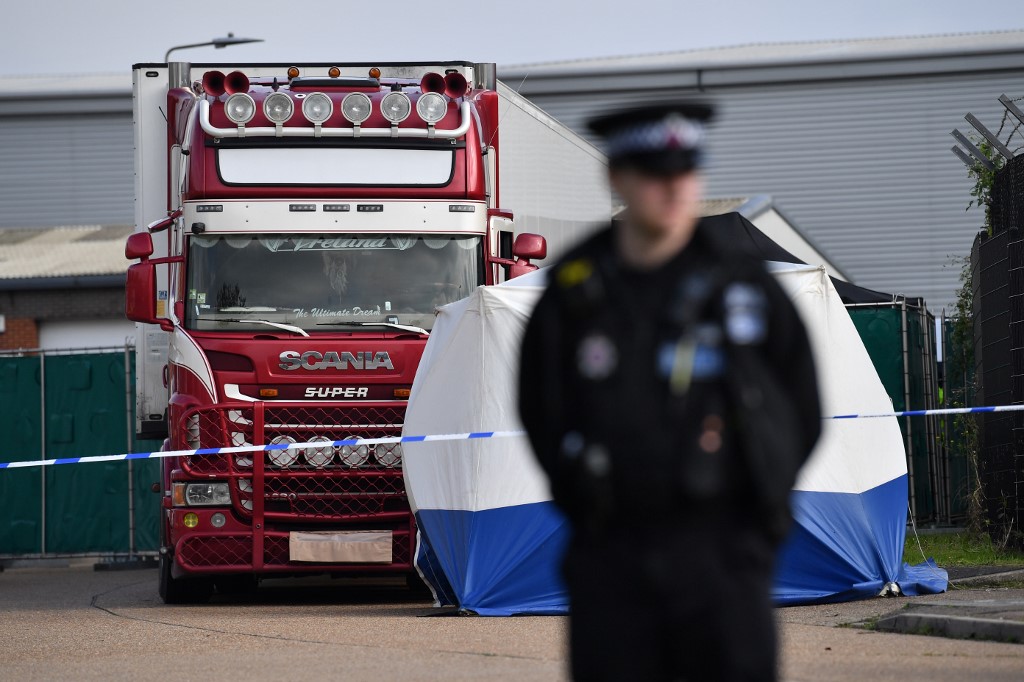 GRAYS, United Kingdom (3rd UPDATE) – Britain launched a major murder investigation after 39 bodies were found on Wednesday, October 23, in a truck from Bulgaria, as police tried to establish where the victims were originally from.

All victims were pronounced dead at the scene in an industrial park in Grays, east of London, triggering revulsion among politicians and once again putting the spotlight on the shadowy people trafficking business.

The local Essex Police force, who are working with immigration officials, said their priority was to try to identify the victims, thought at this stage to be 38 adults and one teenager.

The truck driver, a 25-year-old man from Northern Ireland, has been arrested on suspicion of murder.

“This is a tragic incident where a large number of people have lost their lives,” Essex Police chief superintendent Andrew Mariner said in a statement.

The police said they were alerted by the ambulance service shortly before 1:40am (0040 GMT) following the discovery of a truck container with people inside at the Waterglade Industrial Park.

Officers in white forensic suits could be seen working by the truck and a white tent was erected outside.

Ambulance services said the victims were already dead by the time they arrived.

“We are in the process of identifying the victims. However I anticipate that this could be a lengthy process,” said Mariner.

“We believe the lorry is from Bulgaria,” he added.

“We have arrested the lorry driver in connection with the incident, who remains in police custody.”

The tragedy sparked questions about the route taken by the truck – and whether people trafficking had played a part.

In August 2015, at the peak of Europe’s migration crisis, the bodies of 71 migrants including a baby girl were found piled up in the back of a poultry refrigerator lorry left in Austria.

Investigations later revealed they had been transported along the Balkan migrant route and left to suffocate in the back of the truck after the driver dumped the vehicle near the Hungarian border.

The truck discovered on Thursday is left-hand drive, indicating that it was not British or Irish.

Police said it was thought the lorry entered Britain on Saturday at Holyhead on the northwest tip of Wales – one of the main ports for ferries from Ireland.

The UK and the Republic of Ireland are not in the European Union’s no-borders Schengen zone but have their own historic Common Travel Area, meaning there are no checks on the movement of goods or people between the two.

Richard Burnett, chief executive of the Road Haulage Association which represents truck drivers in Britain, said: “Our thoughts are with the families of the deceased but whatever the circumstances, it highlights the danger of migrant gangs people-smuggling on lorries.”

“People trafficking is a vile and dangerous business,” she said.

“Let’s hope they bring these murderers to justice.”

British Prime Minister Boris Johnson said he was receiving regular updates and sent his sympathies to the victims’ families.

“I’m appalled by this tragic incident in Essex,” he said.

“My thoughts are with all those who lost their lives and their loved ones.”

“Home Office immigration officials will be working closely alongside them to establish how this horrific event came to happen.”

Cases of this kind are rare in Britain.

In 2014, staff at the Tilbury container port – next to Grays – heard screaming and banging coming from inside a shipping container, and found 34 Afghan Sikhs alive inside suffering from severe dehydration, hypothermia and lack of air.

One man was found dead, having passed away during the sea crossing from Belgium.

In 2000, the bodies of 58 clandestine Chinese immigrants were discovered in a Dutch truck at the British port of Dover. Two people survived. – Rappler.com