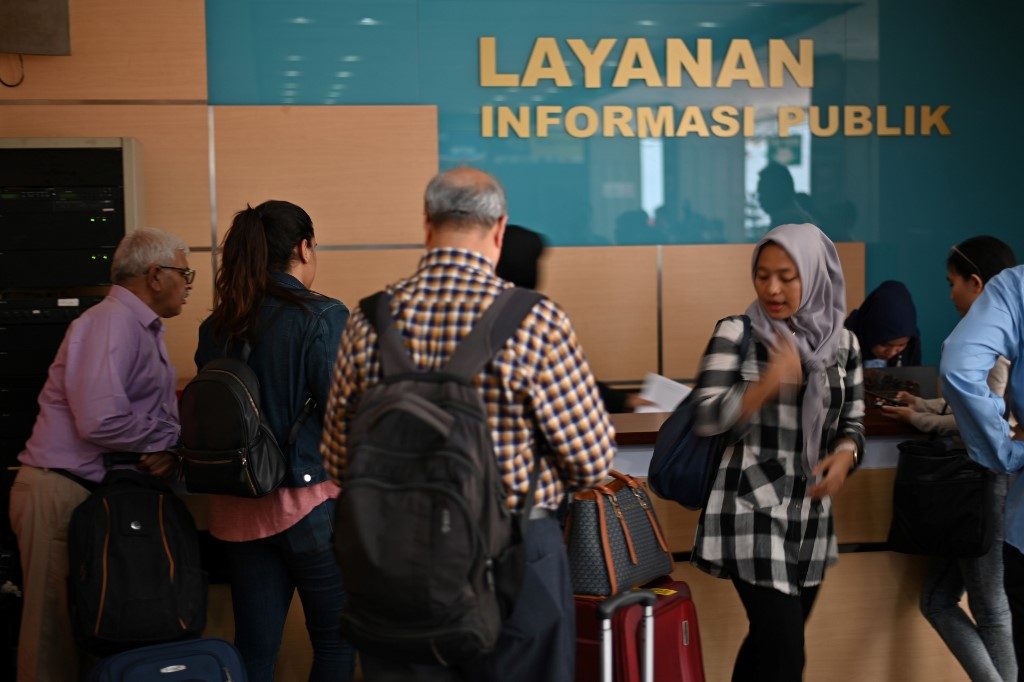 Facebook Twitter Copy URL
Copied
Grieving relatives express anger that investigators were not planning to blame Boeing or Lion Air for the disaster in their final crash report, expected Friday

JAKARTA, Indonesia – Mechanical and design problems with a Boeing 737 MAX flight control system were key factors in the crash of a Lion Air jet last year, Indonesian investigators told victims’ families in a briefing on their findings Wednesday, October 23.

But some grieving relatives expressed anger that investigators were not planning to blame the US airplane maker or budget carrier for the disaster in their final crash report expected Friday.

“We’re not satisfied with the explanation from investigators, but we have no choice but to accept it,” Epi Syamsul Qomar, who lost his son, told reporters after a closed-door meeting with investigators in Jakarta.

All 189 passengers and crew were killed when the Boeing 737 MAX slammed into the Java Sea shortly after takeoff from Jakarta on October 29 last year.

A few months later, the model was grounded worldwide after an Ethiopian Airlines 737 MAX crashed, killing 157 people aboard.

Preliminary investigations into both accidents implicated the model’s Maneuvering Characteristics Augmentation System (MCAS), an automated flight-handling mechanism that pilots were unable to control.

In a slideshow presentation, Indonesia’s National Transportation Safety Committee told relatives their report would include problems with the MCAS as a “contributing factor”.

“During the design and certification of the (737 MAX), assumptions were made about pilot response to malfunctions which, even though consistent with current industry guidelines, turned out to be incorrect,” said the presentation, part of which was provided to AFP.

It added that the system was vulnerable to the sole sensor it relied on for inputs, and that a replaced sensor on the doomed Lion Air plane had been “miscalibrated” during an earlier repair.

An “absence of guidance” to 737 MAX pilots added to the challenges of dealing with a malfunction, according to the presentation.

“As the report hasn’t been officially released by the investigative authorities, it is premature for us to comment on its contents,” a Boeing spokeswoman said.

Lion Air, Southeast Asia’s biggest airline by fleet size, did not reply to requests for comment.

A report released by international regulators said the US Federal Aviation Administration lacked the manpower and expertise to fully evaluate the jet’s MCAS when it certified the plane.

“Why would the investigation not recommend a severe sanction for the airline?” asked Anton Sahadi, who lost his cousin in the crash.

“This isn’t just about one person. They were 189 lives” lost, he added.

However, investigators said they did not have a mandate to assign blame or recommend sanctions.

The sit-down with relatives came after Boeing on Tuesday replaced the chief of its commercial plane division, the most significant executive departure since the 737 MAX grounding plunged the company into crisis seven months ago.

Boeing faced new scrutiny following text messages from November 2016 in which a test pilot described the MCAS during a simulation as “running rampant” and behaving in an “egregious” manner.

The company shared the messages with the Department of Justice in February.

But the FAA learned of their existence only recently and publicly criticised Boeing for withholding them.

Boeing is facing scores of lawsuits, and a plaintiffs’ lawyer previously told AFP that it had so far reached settlements with 11 families of victims. (READ: S&P downgrades Boeing credit rating outlook to negative)

But some relatives expressed scepticism about Boeing and the law firms suing the company.

“We have no information on the compensation Boeing is offering,” Imam Rismanto, who lost his older brother in the crash, said before Wednesday’s meeting.

“Some law firms contacted us, but we’re afraid they’ll just use us … We don’t want anyone taking advantage of us just because this is a major case.

“And we don’t want a constant reminder of this sad accident — we just want to move on,” he added. – Rappler.com