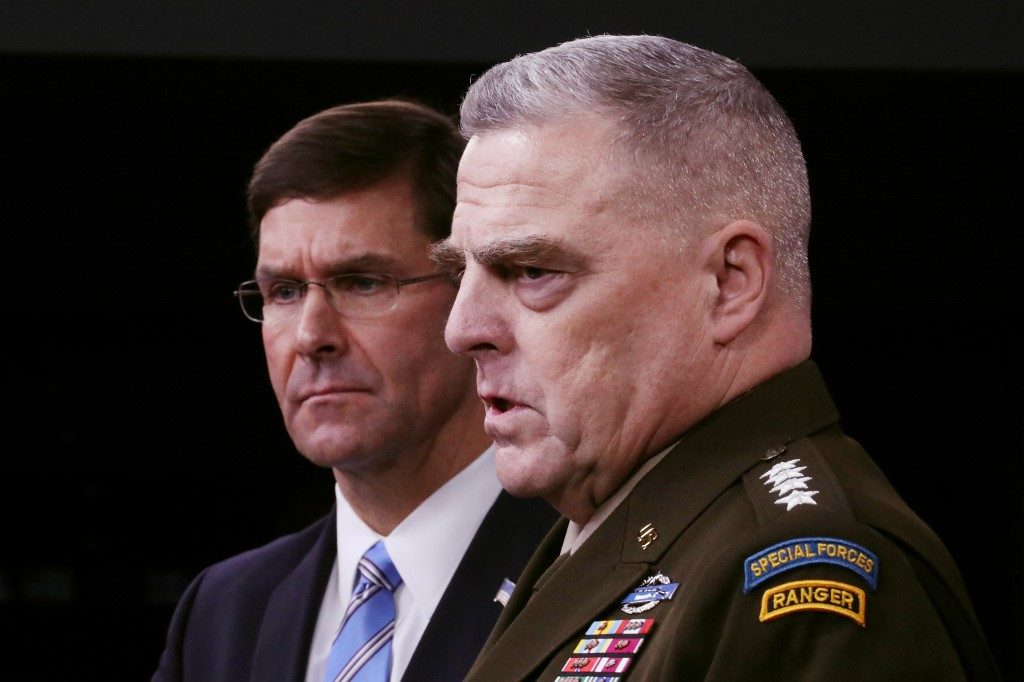 Facebook Twitter Copy URL
Copied
The US military basks in success after the eliminating the founder and spiritual guide of the Islamic State group, capping a years-long campaign to crush the Sunni Muslim extremist organization

WASHINGTON, USA – US officials said Monday, October 28, that the body of Islamic State group chief Abu Bakr al-Baghdadi was buried at sea as fresh details surfaced about the US special forces operation that led to his death over the weekend.

Syrian Kurds claimed to be a key source of the intelligence that led Americans to Baghdadi after years of tracking the brutal jihadist leader behind a five-year reign of terror across much of Iraq and Syria.

And an unnamed US military dog became a unlikely hero of the raid, incurring injuries as it chased Baghdadi down a dead-end tunnel underneath his northwestern Syria hideout before he blew himself and 3 children up with a suicide vest.

We have declassified a picture of the wonderful dog (name not declassified) that did such a GREAT JOB in capturing and killing the Leader of ISIS, Abu Bakr al-Baghdadi! pic.twitter.com/PDMx9nZWvw

The US military basked in success Monday after the eliminating the founder and spiritual guide of the Islamic State (ISIS) group, capping a years-long campaign to crush the Sunni Muslim extremist organization that had at one point created a “caliphate” straddling the Euphrates River that rivaled the size of England.

“His death marks a devastating blow to the remnants of (ISIS),” said Defense Secretary Mark Esper.

He praised the nearly hundred-strong force that helicoptered to the rural compound in the Idlib region of Syria in a complex mission that required coordination with Russians, Kurds, Turks and President Bashar al-Assad regime to prevent US aircraft from being fired upon.

“They executed the raid in all of its facets brilliantly,” Esper said.

Joint Chiefs of Staff Chairman General Mark Milley said no one was injured in the operation, despite the US team taking fire when they arrived.

They took two men prisoner, and Baghdadi’s remains were removed after he killed himself.

“Baghdadi’s remains were then transported to a secure facility to confirm his identity with forensic DNA testing,” Milley said.

“The disposal of his remains has been done, is complete and was handled appropriately,” he added, saying it was handled “in accordance with the law of armed conflict.”

Another Pentagon official confirmed that Baghdadi’s body was dumped into the sea at an unnamed location, similar to the 2011 sea burial of Al-Qaeda leader Osama bin Laden after he was killed in a US special forces raid in Pakistan.

A Kurdish official said an inside source they oversaw was responsible for leading US forces to Baghdadi’s hideout, helping to map out the interior of the compound, its staffing, as well as making it possible for them to identify Baghdadi.

“Since 15 May, we have been working together with the CIA to track al-Baghdadi and monitor him closely,” said Polat Can, a senior adviser to the Kurdish-led Syrian Democratic Forces.

The group had an informant who was able to infiltrate Baghdadi’s house.

“Al-Baghdadi changed his places of residence very often,” he said on Twitter.

“Our intelligence source was involved in sending coordinates, directing the airdrop, participating in and making the operation a success until the last minute,” Polat Can said.

The source also “brought al-Baghdadi’s underwear to conduct a DNA test and make sure (100%) that the person in question was al-Baghdadi himself,” he said.

Attention focused as well on the unnamed dog – likely a Belgian Malinois, a breed favored by the military, which chased Baghdadi into a tunnel under the complex and cornered him before he detonated his suicide vest.

President Donald Trump praised the dog on Sunday, October 27, as “beautiful,” but military officials said any information about it, including its name, was secret.

The dog had been “slightly wounded and is fully recovering,” he said.

“The dog is still in theater, returned to duty, with its handler.”

US will not police Syria

US officials said Baghdadi’s death would not end the conflict in the Syria, but warned Washington could not be relied on to bring peace to the region.

“Baghdadi’s death will not rid the world of terrorism or end the ongoing conflict in Syria,” said Esper.

“The security situation in Syria remains complex,” he said, adding: “Acting as a police force out to solve every dispute is not our mission.”

But he said the death of Baghdadi “will certainly send a message to those who would question America’s resolve and provide a warning to terrorists who think they can hide.” – Rappler.com