Nov 3, 2019 3:31 PM PHT
Agence France-Presse
Facebook Twitter Copy URL
Copied
(UPDATED) China's premier Li Keqiang says the first reading of the code of conduct – a chance for all members to comment on the draft terms – is 'a very important landmark' 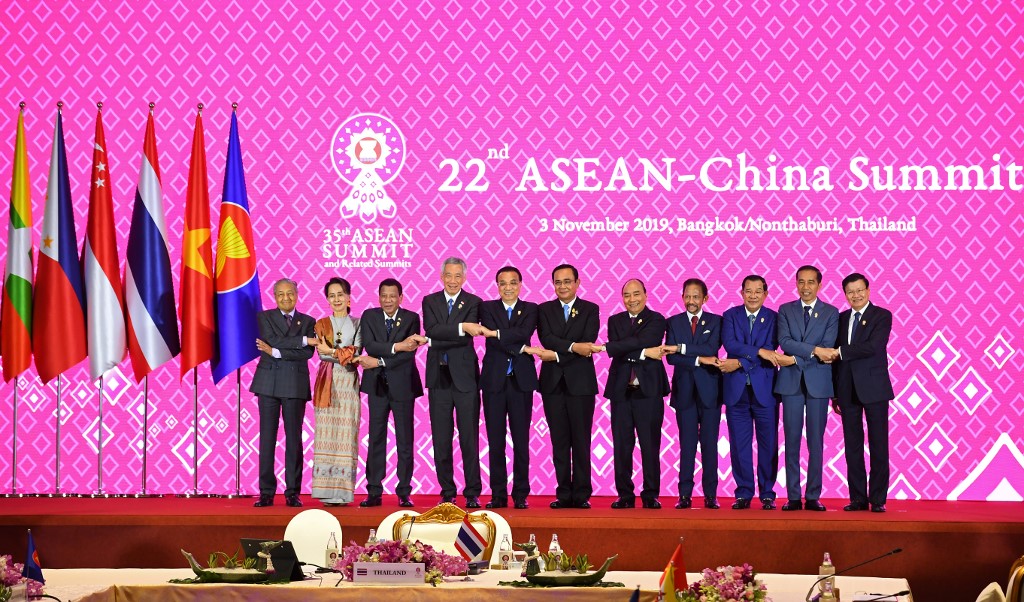 BANGKOK, Thailand (UPDATED) – Beijing said on Sunday, November 3, it is “ready to work” with Southeast Asian nations on a code of conduct in the flashpoint South China Sea, where it is accused of building up military installations and bullying fellow claimants.

China claims most of the resource-rich waterway, a major global shipping route that has long been a source of tension in the region.

For years, the 10-member Association of Southeast Asian Nations (ASEAN) has been locked in talks for a code of conduct for the sea, where China is accused of deploying warships, arming outposts and ramming fishing vessels.

The agreement, set to be finished in 2021, will lay out conduct guidelines for the sea along with conflict resolution parameters. (READ: Duterte in ASEAN: Let’s exercise ‘self-restraint’ in South China Sea)

On Sunday, China’s premier Li Keqiang said the first reading of the document – a chance for all members to comment on the draft terms – was “a very important landmark.”

“We stand ready to work with ASEAN countries building on the existing foundation and the basis to strive for new progress” on the guidelines, he said.

He added that China wanted to “maintain and uphold long-term peace and stability in the South China Sea.”

The Philippines – which has sparred with China in the sea – said on Sunday that Beijing is committed to the code, despite its broad claims to the waterway.

“It recognizes the fact that if it doesn’t agree to a code of conduct then there will be turmoil in the region,” presidential spokesman Salvador Panelo told reporters in Bangkok on the sidelines of ASEAN.

The Philippines in 2016 filed a case with a UN-backed tribunal, which ultimately rejected Beijing’s assertions in the sea.

Tensions in the waterway have flared in recent weeks between China and Vietnam, one of Beijing’s most vocal critics on the issue.

Hanoi hit back at China after it sent a survey ship into waters inside its Exclusive Economic Zone and around islands claimed by both Hanoi and Beijing.

The ship left after several weeks in the area.

Taiwan, Malaysia and Brunei also have overlapping claims with China in the sea.

The US has accused China of bullying behavior, and Secretary of State Mike Pompeo said last week America has been too easy on China.

“We hesitated and did far less than we should have,” he said, referring to China’s disputes with Vietnam and the Philippines.

The 3-day ASEAN summit in Bangkok closes Monday, with leaders expected to issue a joint statement that will likely include a section on the South China Sea.

Members have tussled in the past over wording in the final statement, with some countries pushing for harsher language against China. – Rappler.com