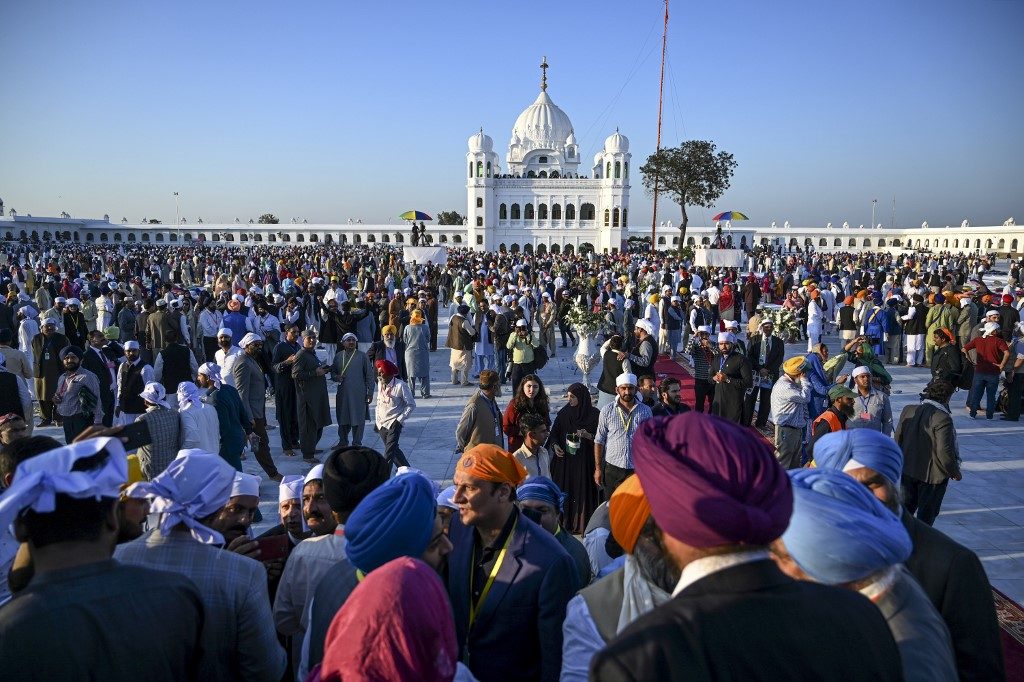 KARTARPUR, Pakistan – Hundreds of Indian Sikhs made a historic pilgrimage to Pakistan on Saturday, November 9, crossing through a white gate to reach one of their religion’s holiest sites, after a landmark deal between the two countries separated by the 1947 partition of the subcontinent.

Cheering Sikhs walked joyfully along the road from Dera Baba Nanak in India towards the new immigration hall that would allow them to pass through a secure land corridor into Pakistan, in a rare example of cooperation between the nuclear-armed countries divided by decades of enmity.

Some fathers ran, carrying their children on their shoulders.

Buses were waiting on the Pakistani side to carry them along the corridor to the shrine to Sikhism’s founder Guru Nanak, which lies in Kartarpur, a small town just four kilometers (2.5 miles) inside Pakistan where he is believed to have died.

“Generally people say that God is everywhere. But this walk feels like I’m going to directly seek blessings from Guru Nanak,” Surjit Singh Bajwa told AFP as he walked towards the corridor, crying as he spoke.

At 78, he is older than India and Pakistan, who have fought 3 wars already and nearly ignited a 4th earlier this year.

For up to 30 million Sikhs around the world, the white-domed shrine is one of their holiest sites.

However for Indian Sikhs, it has remained tantalizingly close – so close they could stand at the border and gaze at its 4 cupolas – but out-of-reach for decades.

When Pakistan was carved out of colonial India at the end of British rule in 1947, Kartarpur ended up on the western side of the border, while most of the region’s Sikhs remained on the other side.

Since then, the perennial state of enmity between India and Pakistan has been a constant barrier to those wanting to visit the temple, known in Sikhism as a gurdwara.

Pilgrims on both sides of the border hoped the corridor might herald a thaw in South Asian tensions.

“When it comes to government-to-government relations, it is all hate and when it comes to people-to-people ties, it’s all love,” one of the Sikh pilgrims, who did not give his name, told Pakistani state TV as he crossed.

Among the first pilgrims was former Indian Prime Minister Manmohan Singh, who told Pakistani state media that it was a “big moment”.

The opening even inspired a singular message of gratitude from Indian Prime Minister Narendra Modi to his Pakistani counterpart Imran Khan for “respecting the sentiments of India”.

For his part, Khan said a day would come “when our relations with India will improve”.

“I am hopeful that this the beginning,” he told the pilgrims at the shrine.

For years India had been asking Pakistan to grant Sikhs access to the shrine.

Many believe it has happened now because of the friendship between Khan, a World Cup winning cricketer-turned politician, and India’s Navjot Singh Sidhu – another cricketer-turned-politician.

“When Sidhu asked me to open the border, I kept it in my mind,” Khan told devotees Saturday.

He compared the situation to Muslims being able to see holy sites in Medina, but never visit.

The opening comes just days ahead of the Guru Nanak’s 550th birthday on November 12 – an anniversary of huge significance for the global Sikh community, and which may also have played a role in the timing.

Sikhs from around the world have been arriving in Pakistan ahead of the celebrations for days already.

An estimated 7,000 were at the shrine to hear Khan’s speech, though it was not clear how many had come via the corridor and how many had arrived from elsewhere. Indian officials said just 700 were expected to cross through the corridor Saturday.

Many were emotional, some in tears. Others posed for selfies before a giant gold- and silver-colored kirpan, the dagger which Sikhs must carry with them at all times as an article of their faith.

The Sikh faith began in the 15th century in Punjab, a region including Kartarpur which is split today between India and Pakistan, when Guru Nanak began teaching a faith that preached equality.

There are an estimated 20,000 Sikhs left in Pakistan after millions fled to India following the bloody religious violence ignited by partition, which sparked the largest mass migration in human history and led to the death of at least one million people.

“Life is short,” said one of the Indian pilgrims, Davinder Singh Wadah.

“Everyone has to go… so why not enjoy life and make this world a heaven, and I think this initiative is the beginning of it.” – Rappler.com