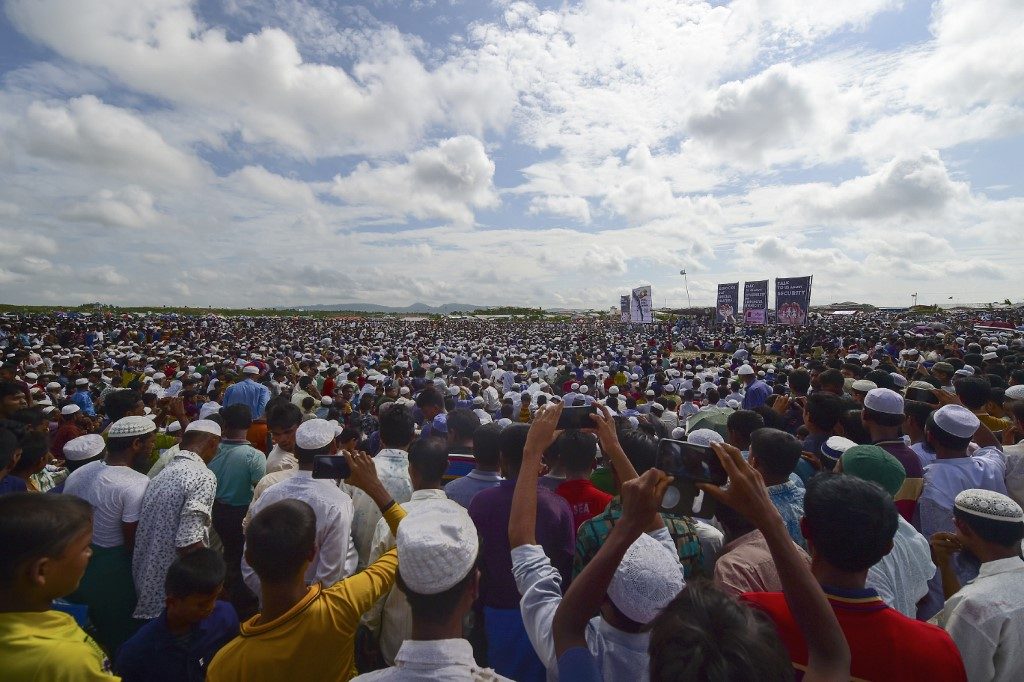 THE HAGUE, Netherlands – Myanmar faced accusations of genocide in a landmark lawsuit filed by Gambia at the UN’s top court on Monday, November 11, over the Southeast Asian nation’s treatment of Rohingya Muslims, Gambia’s government said.

Gambia said it was acting on behalf of the 57-nation Organization of Islamic Cooperation in bringing the case against Myanmar before the International Court of Justice (ICJ) in The Hague.

The 2017 crackdown forced 740,000 Rohingya to flee over the border into sprawling camps in Bangladesh, in violence that United Nations investigators say amounts to “genocide.” (READ: 200,000 Rohingya rally to mark ‘Genocide Day’ in Bangladesh camps)

“The Gambia is taking this action to seek justice and accountability for the genocide being committed by Myanmar against the Rohingya,” Justice Minister Abubacarr Tambadou said in a statement.

The court is expected to hold its first hearings in December on Gambia’s request for urgent interim measures “to protect the Rohingya against further harm”, Gambia’s lawyers Foley Hoag said in a statement, describing the case as “historic”.

Human Rights Watch hailed the move by the tiny west African state, saying it was the “first judicial scrutiny” of Myanmar’s alleged crimes against the Rohingya.

The lawsuit asks the ICJ to “order Myanmar to cease and desist from its genocidal acts, to punish the perpetrators, and to provide reparations for the Rohingya victims,” Gambia’s justice ministry said.

It said Myanmar had failed to meet its obligations to prevent and to punish genocide, accusing it of “wanton acts of violence and malicious degradation with the specific intent of state actors to destroy the Rohingya as a group”.

Mainly-Muslim Gambia said it had “stepped up” to file the case on behalf of the rest of the OIC. Tambadou is a former genocide prosecutor at the International Criminal Tribunal for Rwanda and has visited Rohingya camps in Bangladesh.

Other legal attempts to bring Myanmar to justice over allegations of crimes against the Rohingya have so far stalled.

The prosecutor for the International Criminal Court — a separate tribunal from the ICJ that investigates war crimes — launched a preliminary investigation into Myanmar in 2018 but no charges have been filed yet.

UN investigators have also called on the UN Security Council to refer Myanmar to the Hague-based ICC or to set up a tribunal, like for the former Yugoslavia and Rwanda, but again no action has yet been taken.

The ICJ was set up in 1946 after World War II to adjudicate in disputes between UN member states.

It normally deals with issues of international law such as border disputes, but sometimes rules on alleged breaches of UN conventions such as those on terrorism or genocide.

The ICJ previously dealt with a genocide case when Bosnia brought a lawsuit against Serbia over the conflict in the former Yugoslavia in the 1990s.

That case ended in 2007 with Serbia being held to have failed to prevent genocide during the 1995 Srebrenica massacre and of failing to cooperate with war crimes tribunals. – Rappler.com