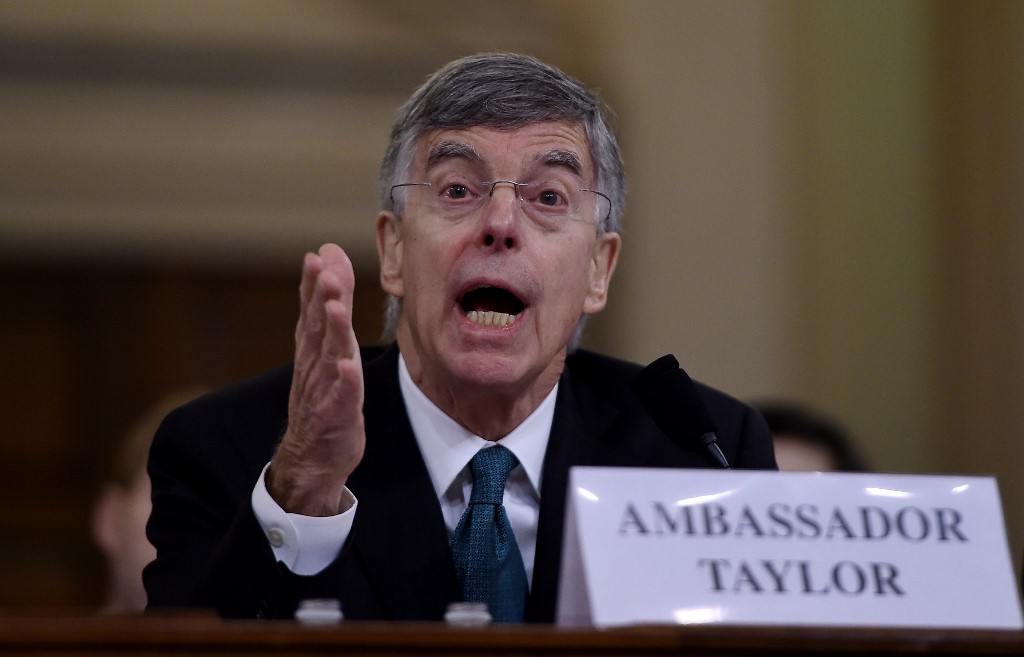 WASHINGTON, USA – During hours of detailed and at times dramatic public testimony Wednesday, November 13, two star witnesses shed light on US President Donald Trump’s pressure on Ukraine at the heart of the impeachment inquiry against him.

Here are 5 key moments in the nationally televised impeachment hearing:

A crucial surprise came when Taylor revealed a phone call between Trump and another diplomat occurred one day after the president’s controversial July 25 call with Ukrainian President Volodymyr Zelensky.

Taylor said his staffer was with Ambassador to the European Union Gordon Sondland and overheard Trump on the call “asking Ambassador Sondland about the investigations” of Democratic rival Joe Biden.

The staffer asked Sondland what Trump thought about Ukraine. “Ambassador Sondland responded that President Trump cared more about the investigations of Biden, which (Trump lawyer Rudy) Giuliani was pressing for,” than about Ukraine itself, Taylor added.

The revelation is important because it highlights Trump’s knowledge about the effort to get Kiev to probe the Bidens and deflates a Trump defense that he “hardly” knows Sondland, as he said last week. 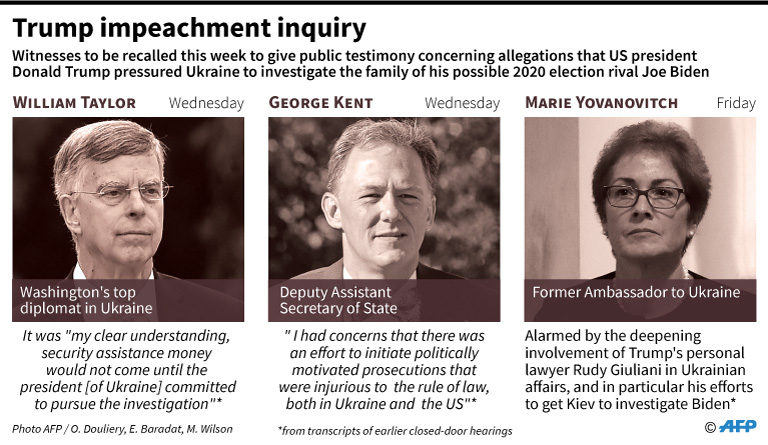 Republicans accused the witnesses of being out-of-touch bureaucrats too removed from Trump’s inner circle to speak authoritatively about what happened, or to know the president’s intentions.

“We’ve got 6 people having 4 conversations in one sentence,” Jordan told Taylor, referring to closed-door testimony by Sondland, “and you told me this is where you got your clear understanding?”

The intelligence panel’s top Republican Devin Nunes meanwhile attempted to discredit the Democratic effort as “nothing more than an impeachment process in search of a crime.”

In his call with Zelensky, Trump urged his counterpart to “look into” possible wrongdoing by Biden, whose son Hunter was on the board of Ukrainian energy company Burisma when his father was vice president.

Republicans have used that talking point to suggest the Bidens were involved in corruption. No such evidence has emerged.

When the Democratic counsel asked Kent whether there were any facts to support those allegations, Kent replied, “None whatsoever,” adding that Biden acted in accordance with official US policy.

Kent did say he raised concerns with Biden’s staff that his son’s status with Burisma “could create the perception of a conflict of interest.”

Taylor spoke of an irregular channel, set up by Giuliani, that “undercut” official US policy with Ukraine while seeking to help the president politically.

“I began to sense that the two decision-making channels – the regular and irregular – were at odds,” Taylor said.

He also said he told the administration that “withholding security assistance in exchange for help with a domestic political campaign… would be crazy.”

Often overlooked in the impeachment drama is the security situation in Ukraine, which is facing off against Russia’s military. Kiev also accuses the Kremlin of supporting pro-Moscow rebels.

Taylor reminded lawmakers and viewers that “even as we sit here today,” Ukraine is under daily attack from Russia-backed forces.

Just last week, he added, he visited the front lines on a day that a Ukrainian soldier was killed.

Had the military aid been frozen, it would have severely weakened Zelensky in negotiations with Russia and on the battlefield, Taylor said. – Rappler.com