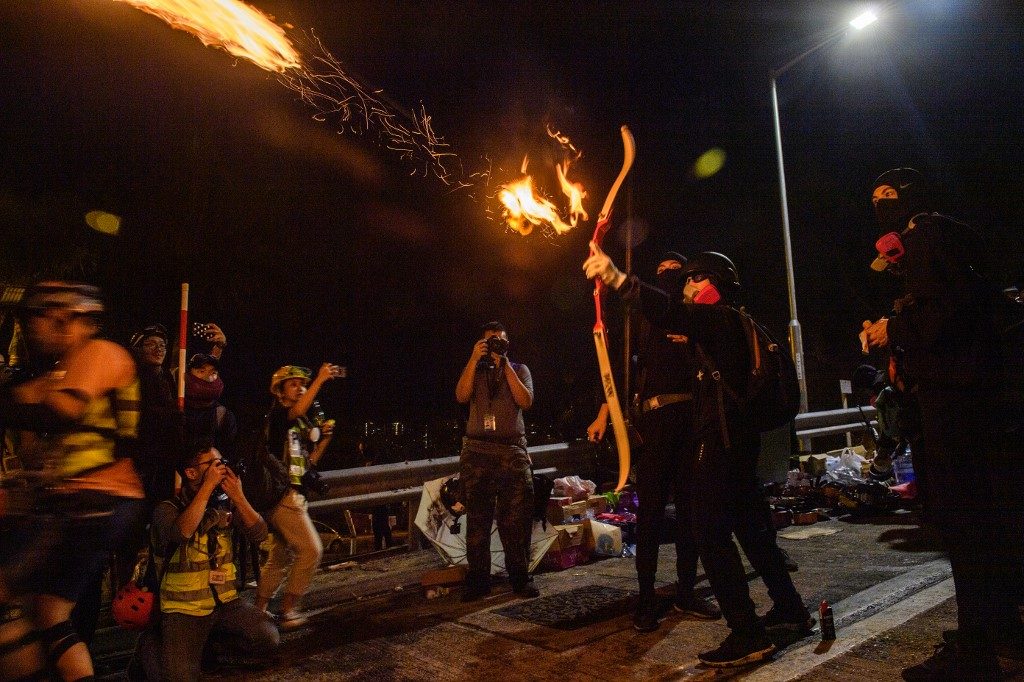 Facebook Twitter Copy URL
Copied
The territory enters its sixth month of protests, which have morphed from mass rallies into a 'blossom everywhere' campaign of debilitating disruption by groups of black-clad mainly student demonstrators

The territory has entered its sixth month of protests, which have morphed from mass rallies into a “blossom everywhere” campaign of debilitating disruption by groups of black-clad mainly student demonstrators.

Key arterial roads were clogged by brick and bamboo barricades, a major cross-harbor tunnel was closed while metro stations and bus services were shut down, as travel chaos gripped the city of 7.5 million people

Schools and universities were also shuttered and hospitals deferred non-emergency operations, with the government urging employers to be flexible with workers trapped in the gridlock.

Protests began in June as a kickback against an attempt by the city’s Beijing-backed government to hustle through an extradition bill.

The bill was eventually shelved but demonstrations have snowballed into a wider demand for democracy by protesters who fear the city’s unique freedoms are being hacked back by Beijing.

Violence has intensified this week across the financial hub, leaving several people in critical condition, stretching police resources and hammering the transport network.

The first volleys of tear gas were fired early Thursday by police near the Hong Kong Polytechnic University, as a call went out for protesters to mass at the campus.

In a Facebook post police accused “rioters” of shooting “arrows at several police officers who were patrolling” near Polytechnic University early on Thursday.

Students have turned to an arsenal of new weapons – from makeshift catapults to bow and arrows pulled from sports departments to fend off police armed with tear gas and rubber bullets.

“Urgent! Poly is in a battle! Need people! Need supplies!” a post said on LIHKG – an online forum widely used by the protest movement, as the campus appeared poised to become a focal point of Thursday’s action.

The government said nearly 70 people were hospitalized on Wednesday – two in critical condition, including a 70-year-old man hit by a brick as he tried to clear a roadblock.

Protesters are also calling for accountability for Hong Kong’s police force, which is accused of heavy-handed tactics and widespread abuses.

But Hong Kong’s government has refused to cede more ground since binning the extradition bill, defending the police response to an unprecedented crisis.

Beijing – facing the most serious challenge to its authority since the 1997 handover of the city from British rule – has taken a harder line in step with the mounting violence.

A commentary in the Communist Party mouthpiece, the People’s Daily, said strong measures were required to contain and the extinguish the violence

“If you stand by when seeing a fire, it will burn everything. The best way is to put out the fire decisively before it spreads,” the newspaper said.

The last 3 days of rolling clashes between police and protesters has sunk the city deeper into crisis.