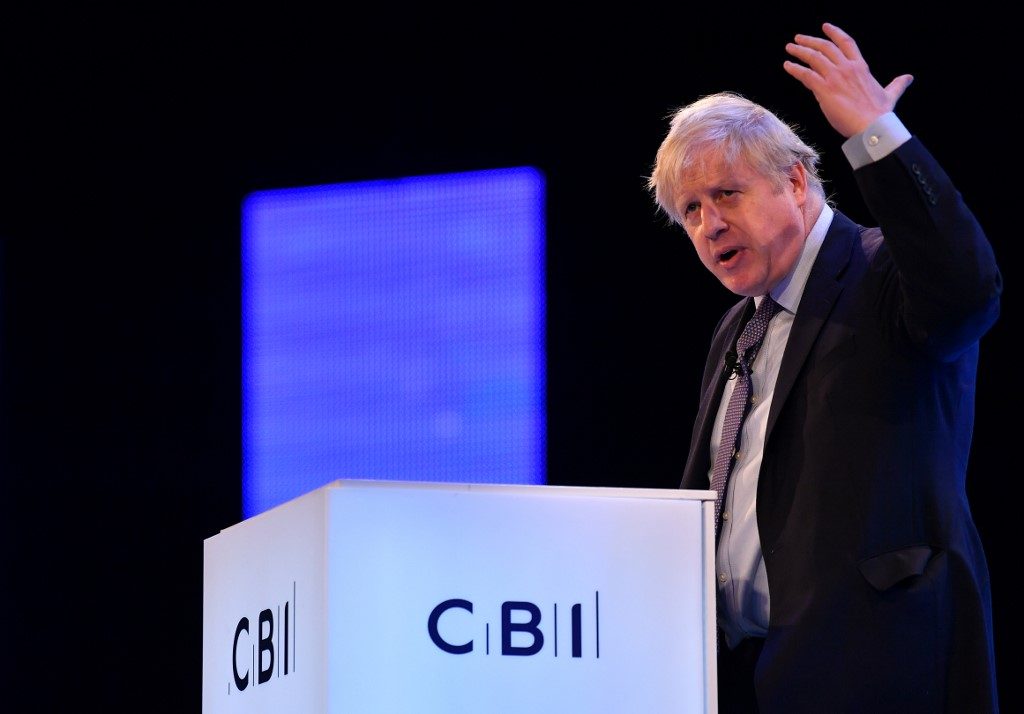 In a speech to the Confederation of British Industry lobby group, Conservative leader Johnson acknowledged that “big business” opposed the 2016 referendum vote to leave the European Union.

But he said his plan to “Get Brexit Done” – by winning enough MPs to ratify his exit deal and leave the EU on January 31 – would end years of political turmoil.

“The worst thing now is the continuing economic uncertainty,” he said, admitting that growth – 0.3% in the last quarter – was not as good as it could be.

Johnson announced cuts in taxes for jobs, lease of buildings and non-domestic properties – business rates – which he said would be worth £1 billion ($1.3 billion, 1.2 billion euros) in 2022-2023.

However, he also revealed he would postpone a planned cut to corporation tax, from 19% to 17% next year.

Johnson said this would free up £6 billion to be spent on “the priorities of the British people,” including the state-run National Health Service (NHS).

This was “the fiscally responsible thing to do at the present time,” he said. The Conservatives are leading Labour in surveys ahead of the December 12 polls, but are wary of the threat posed by leftist leader Corbyn at the last election in 2017.

This time around, Johnson has promised an end to a decade of belt-tightening, offering a large increase in spending on infrastructure and public services.

In his speech to the CBI, Corbyn also promised to cut business rates because “we know the damage they are doing to our high streets”.

In addition, he announced plans for a new program of apprenticeships in green technologies.

Labour wants to nationalize the broadband, water, rail and mail delivery services, but Corbyn dismissed as “nonsense” suggestions he was anti-business.

A Labour government would deliver “more investment than you ever dreamt of,” he promised.

At the same meeting, CBI chief executive Carolyn Fairbairn warned that “extreme ideology” on both sides was weighing on business confidence.

She highlighted concerns about Johnson’s threat to leave the EU last month without a deal with Brussels, which many businesses fear could have led to huge economic disruption.

Last year, he was also reported to have replied “Fuck business” when asked about corporate concerns over his Brexit plans.

The prime minister has since agreed a divorce deal with the bloc, but it has not yet been ratified by parliament and the risk of “no deal” remains.

Fairbairn noted how some on the political right wanted to leave with no deal, seeking it as a means to the “wholesale deregulation” of the British economy.

“I want to be clear that this is not what British firms, large or small, want,” she said.

Labour’s plans were “at least as damaging,” with the nationalization program likely to cost a huge amount while the benefits to taxpayers and consumers were not clear, she argued.

“These ideologies from both sides are causing great harm to our economy. Not just in the future but right now,” she concluded.

“To see this, you only have to look at the effect on business investment, which has fallen in 5 of the last 6 quarters. Confidence in Britain is faltering.” – Rappler.com