Nov 20, 2019 3:21 PM PHT
Agence France-Presse
Facebook Twitter Copy URL
Copied
Gordon Sondland, the US ambassador to the European Union, is seen as a central conveyor of Trump's demands that Ukraine investigate potential 2020 rival Joe Biden in exchange for unfreezing US aid to the country 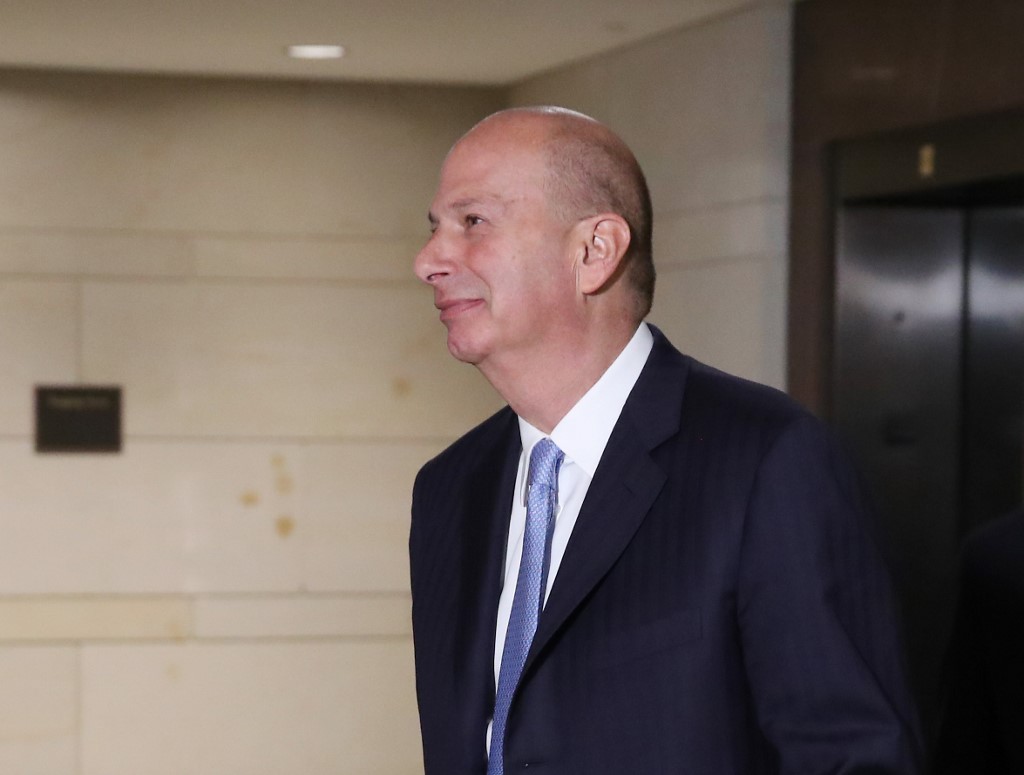 WASHINGTON, DC, USA – A key actor in President Donald Trump’s alleged effort to pressure Ukraine for dirt on his political rivals will be in the hot seat Wednesday, November 20, as Democrats build their case for impeaching the US leader.

Numerous witnesses have fingered Gordon Sondland, the US ambassador to the European Union, as a central conveyor of Trump’s demands that Ukraine investigate potential 2020 rival Joe Biden in exchange for unfreezing US aid to the country.

In earlier closed-door testimony Sondland repeated almost 100 times that he “can’t remember” and “can’t recall” when pressed over his dealings with Trump and Ukraine.

Initially maintaining that he was unaware that US military aid was being held up in exchange for a probe, he later made a humiliating about-face, amending his testimony to state that he did in fact know this was the case.

In the second week of televised hearings in the House Intelligence Committee, the hotel tycoon-turned-diplomat is expected to be confronted with powerful evidence that could force him into refusing to answer, or dramatically testifying against the US leader.

Sondland’s testimony will come a day after Republicans struggled to defend Trump against mounting allegations of abuse of power and charges that he sought to “extort” Ukraine President Volodymyr Zelensky.

During 9 hours of testimony Tuesday, four witnesses described how Trump, Sondland and Trump’s personal lawyer Rudy Giuliani sought for months to persuade Ukraine to investigate both Biden and a baseless claim that the Kiev government helped Democrats in the 2016 US elections.

Lieutenant Colonel Alexander Vindman, a respected member of the White House National Security Council, told the committee that Trump’s July 25 phone call with Zelensky — seeking a “favor” to investigate Biden and the vague 2016 election meddling claim — was “inappropriate,” “improper” and a “partisan play.”

“Frankly I couldn’t believe what I was hearing,” Vindman said.

“It is improper for the president of the United States to demand a foreign government investigate a US citizen and a political opponent.”

Sitting next to Vindman, Jennifer Williams, a foreign policy advisor to Vice President Mike Pence, said she too had doubts about the “unusual” July 25 call, which they both monitored from a separate room.

But both assigned more blame to an “irregular” diplomatic track in the hands of Giuliani and Sondland.

Volker said he worried about “conspiracy theories” that Giuliani “was conveying… to the president.”

Morrison, who only took his position in mid-July, said his predecessor warned him of “the Gordon problem,” referring to Sondland’s Ukraine dealings away from standard US diplomatic channels.

Republicans and the White House continued to insist that the investigation, which could see Trump impeached possibly as soon as the end of the year, was a political witch hunt.

“Today we are witnessing the Ukraine hoax, the direct-to-TV sequel to the Russia collusion hoax,” said Devin Nunes, the senior Republican on the Intelligence Committee.

But rather than confront the evidence, they turned to character attacks on the witnesses, including questioning the allegiance of Kiev-born Vindman, a 20-year US army veteran, to the United States.

Vindman, dressed in military uniform decorated with his Purple Heart and other commendations, countered that he had raised questions about the July 25 phone call “out of a sense of duty,” and called Republicans attacks on public servants “reprehensible.”

Sondland’s appearance could generate fireworks. He is close to Trump – he was named ambassador to the EU in 2017 after donating $1 million to the president’s inauguration festivities.

David Holmes, an official at the US embassy in Ukraine, told investigators last week that, after a phone call to Trump from a Kiev restaurant, Sondland said the president sought political benefits from the bilateral relationship.

Trump “did not give a shit about Ukraine,” but cares about “big stuff that benefits the president, like the Biden investigation,” Holmes testified.

Testimony like that could force Sondland into a difficult choice between protecting himself by giving evidence against Trump, or facing his own legal problems by refusing to answer questions.