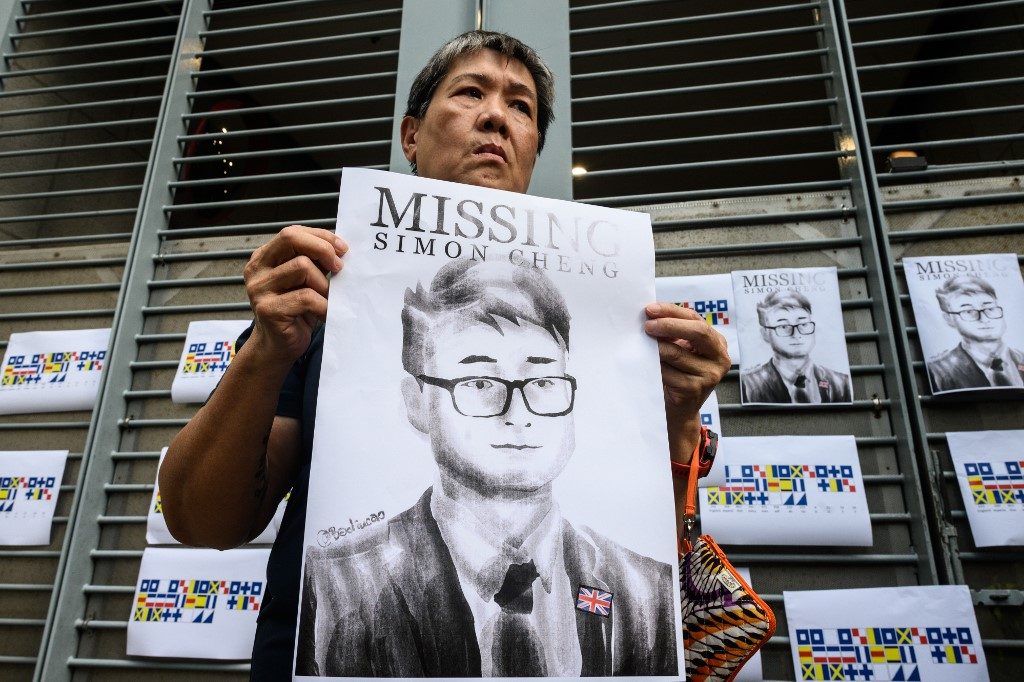 Facebook Twitter Copy URL
Copied
Simon Cheng, a Hong Kong citizen, claims he was shackled to a steel 'tiger chair' hung spread-eagled on a 'steep X-Cross' and beaten while he was detained for 15 days in August

HONG KONG – A former employee of Britain’s consulate in Hong Kong said Wednesday, November 20, that Chinese secret police tortured and interrogated him about London’s role in protests in the semi-autonomous city.

Simon Cheng, a Hong Kong citizen, claimed he was shackled to a steel “tiger chair”, hung spread-eagled on a “steep X-Cross” and beaten while he was detained for 15 days in August.

Raab told BBC radio that he summoned the Chinese ambassador to denounce the “disgraceful” and “outrageous behaviour from the authorities in China” which violate international law.

Cheng was placed in administrative detention after visiting the neighboring southern Chinese city of Shenzhen in August.

He said in a statement on Facebook that he had taken a high-speed train to Hong Kong’s West Kowloon station, where he was stopped by mainland police and sent back to Shenzhen.

Cheng said police tied him to a steel “tiger chair,” accused him of being a British spy and forced to do “extreme strength exercise” for hours, beating him whenever he failed to complete it.

He was also shackled to an X-shaped frame that kept his hands aloft for “hours after hours,” Cheng wrote.

Cheng said he was asked if he knew anyone who worked for British intelligence agencies, what part he had played in protests and what he knew about mainland citizens who had joined the demonstrations.

China has repeatedly accused Washington and London of condoning violence in Hong Kong.

The former British colony was handed back to Beijing in 1997 under a 50-year agreement that gave Hong Kong special rights unseen on the mainland, including freedom of speech and an independent judiciary.

The protests started as a response to a now-scrapped extradition bill but has since expanded to include broader demands for democracy and investigations into police violence.

Geng said that he was unaware of any statements from London on Cheng’s situation, but that China expressed “strong indignation at the recent series mistakes and deeds of the British side on the Hong Kong issue.”

Police in Shenzhen declined to comment on Cheng’s statement when contacted by AFP.

Cheng said he had monitored the protests as part of his work at the British consulate in Hong Kong, “in order to evaluate travel alerts” and whether British citizens were involved.

Outside of work, he supported the movement and had joined the protests.

The longest round of interrogations by a team of police officers lasted 48 hours with no break, Cheng said.

Police expected Cheng to confess that the “UK instigates the riots in Hong Kong by donating money, materials and equipment,” and that he was paying the bail for mainlanders arrested by Hong Kong police using money from the UK government, Cheng said.

Shenzhen police had said in August that Cheng was detained for “violating the law of the People’s Republic of China on public safety management.”

The Global Times, a state-run tabloid, said cited police as saying that Cheng had been held for “soliciting prostitutes”.

Cheng said he felt he had no choice but to make a filmed confession to “soliciting prostitution,” a charge that he said was offered by police as an alternative to “indefinite criminal detention.”

Cheng said he was asked during his detention by police to provide information on members of protest-related Telegram chat groups.

Police also wanted to know why protesters were becoming increasingly violent by late summer, and challenged Cheng’s belief in democracy, calling him a traitor to China.

He said he had complied with some of their demands and drawn up an “organizational chart” of one Telegram group.

Cheng was asked if he had safeguarded the “Lennon Wall” in Hong Kong’s Jordan neighborhood, where protesters had put up messages and posters, and shown a photograph of the wall.

“That photo is not from my mobile phone, I suspect they have eyes and ears for gathering information in Hong Kong,” Cheng wrote.

Cheng said has resigned from the British consulate and fled to an unnamed third place and intends to seek asylum.

“I won’t give up the fight for human rights, peace, freedom and democracy for the rest of my life, no matter the danger, discrimination and retaliation I will face, and no matter how my reputation will be stained,” he wrote. – Rappler.com