Nov 20, 2019 9:46 PM PHT
Agence France-Presse
Facebook Twitter Copy URL
Copied
Mahinda Rajapaksa, a two-term president himself, is due to be sworn in as premier on Thursday following the resignation of Ranil Wickremesinghe 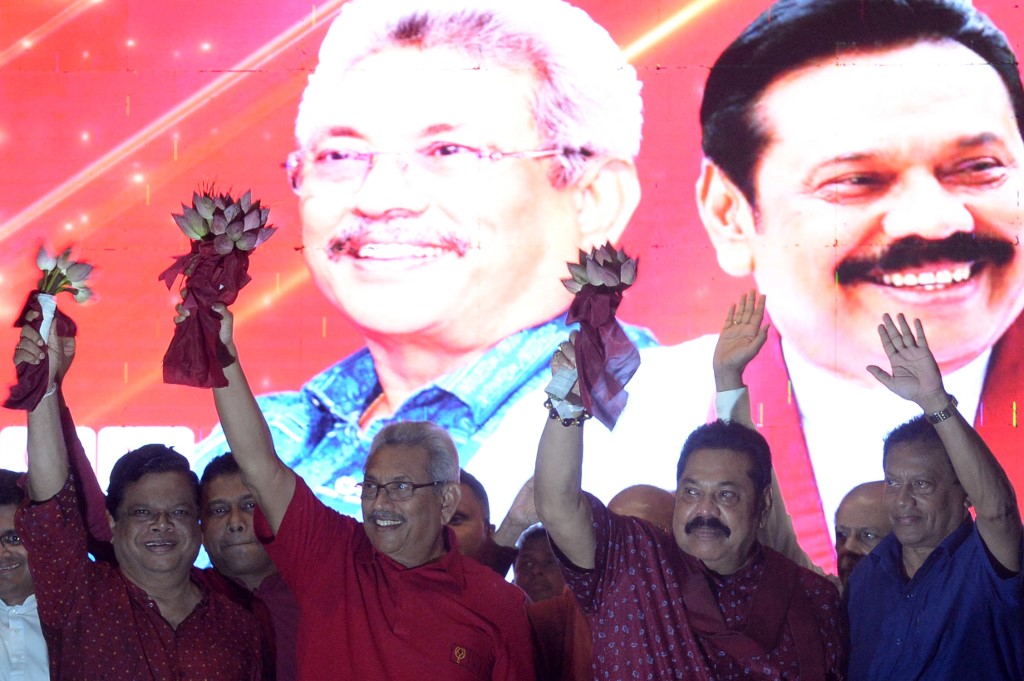 Mahinda, a two-term president himself, is due to be sworn in as premier on Thursday following the resignation of Ranil Wickremesinghe after his party suffered a humiliating defeat at the weekend’s presidential polls.

The Rajapaksa brothers are credited with brutally destroying the Tamil Tigers to end Sri Lanka’s decades-long civil war, with the security services they controlled accused of war crimes and multiple human rights abuses.

A spokesman for the new administration said Rajapaksa, 74, will be sworn in by his younger brother Gotabaya, aged 70.

Two other brothers, Basil and Chamal, are also active in politics.

“Prime Minister Rajapaksa will have his cabinet appointed shortly after taking his oath of office,” said spokesman Vijayananda Herath.

Gotabaya was defence secretary under Mahinda during his decade as president which ended in January 2015.

With the older Rajapaksa taking over as prime minister, Sri Lanka will for the first time have two brothers at the helm. During the first Mahinda presidency, the eldest brother Chamal was the speaker of parliament.

Prime Minister Wickremesinghe formally announced his resignation Wednesday clearing the way for the Rajapaksas to form a minority government ahead of possible snap elections early next year.

“Although we enjoy a parliamentary majority, we respect the mandate received by Mr. Rajapaksa and we have decided to allow him to form a new government,” Wickremesinghe said in an address to the nation.

Wickremesinghe, 70, said he informed the new president about quitting Thursday, allowing a new minority government to be formed.

“The prime minister will have a final meeting with his cabinet as well as other leaders of his coalition before addressing the nation to announce his resignation,” his spokesman Sudarshana Gunawardana said earlier in the day.

Wickremesinghe’s party put forward Sajith Premadasa in the presidential election but was soundly beaten by Gotabaya in a highly divisive election in the island nation of 21.6 million.

The Rajapaksas, are adored by the Sinhala-Buddhist majority – but loathed among minority Tamils – for spearheading the defeat of Tamil separatist militants in 2009 to end the 37-year civil war.

Around 40,000 Tamil civilians were allegedly killed by the military in the closing stages of the conflict when Gotabaya effectively ran the security forces while his brother was president.

During the three-month election campaign held in the shadow of Islamist extremist attacks in April, Gotabaya had promised to make his charismatic and popular brother Mahinda his prime minister.

Wickremesinghe came to power in 2015 on a promise to prosecute members of the outgoing Mahinda regime who were accused of corruption and even murder, but failed to bring any perpetrators to justice.

He ended up facing accusations of cronyism and incompetence and was also implicated in several financial scandals himself.

His government also presided over major security lapses that were blamed for Islamist extremist suicide bombings on three churches and three hotels that killed 269 people on Easter Sunday, April 21.

The current parliament was elected in August 2015 for a five-year term and cannot be dissolved by Gotabaya until March, six months before its term ends.

However legislators, through a majority resolution, could ask for a snap poll. – Rappler.com