Facebook Twitter Copy URL
Copied
Undoubtedly, police are stretched and protester numbers on the frontline are smaller. But the demonstrations are at a stage that gives you a shudder.

HONG KONG – With the number of demonstrators decreasing and the international media coverage selective, from a distance it may seem that the Hong Kong protests are slowing down.

But a closer look would reveal that they are becoming far more aggressive, violent, and controversial. The latest news at the besieged PolyU University offered an insight into this: how no firm leadership was leading to no end.

The incident at PolyU was one of the most notable since the protests began. (READ: Hong Kong: 5 months of protests)

Back in June, there was a reported turnout of 2 million protesters on the streets. July 1st saw protesters storm the Legislative Council building. We’ve passed the “D-Day” as it was called it at the time, China’s 70th birthday on October 1st. The protests have continued through an anti-mask law and even the removal of the extradition bill – the trigger point for the unrests in the first place. All events have teased at an end to the chaos but to no avail.

As trouble continues, the leadership all around has been questionable. Objectively, from the government to police to protesters, the lack of leaders with a construed and realistic plan moving forward is apparent.

The pro-democracy protesters operate in clusters of groups. With their plethora of ideas to demonstrate in a variety of ways, starting with using technology. Online forums and social media platforms are the base of their ideas before being them into action. We’ve seen both ends of the spectrum: the creation of a new anthem “Glory to Hong Kong” to reenacting The Baltic Way showing there is art behind the arson.

On the flip side, we’ve seen widespread damage across the city like Molotov petrol bombs heaved at police and vicious attacks at anyone – likely pro-Beijing supporters – that get in their way. There’s a contrast in style and messiness in their actions. Their togetherness seems unbreakable on the ground, but one would ponder if that firm leadership might further their cause even more. Despite what seems to be an increasing trend on social media in condemning the protesters as “rioters,” in Hong Kong only 41% blame them for the violence*.

Witnessing the attempts at leadership of the Hong Kong government and police  undoubtedly get the most attention. With authorities expected to lead by example with few mistakes, that isn’t the case here. 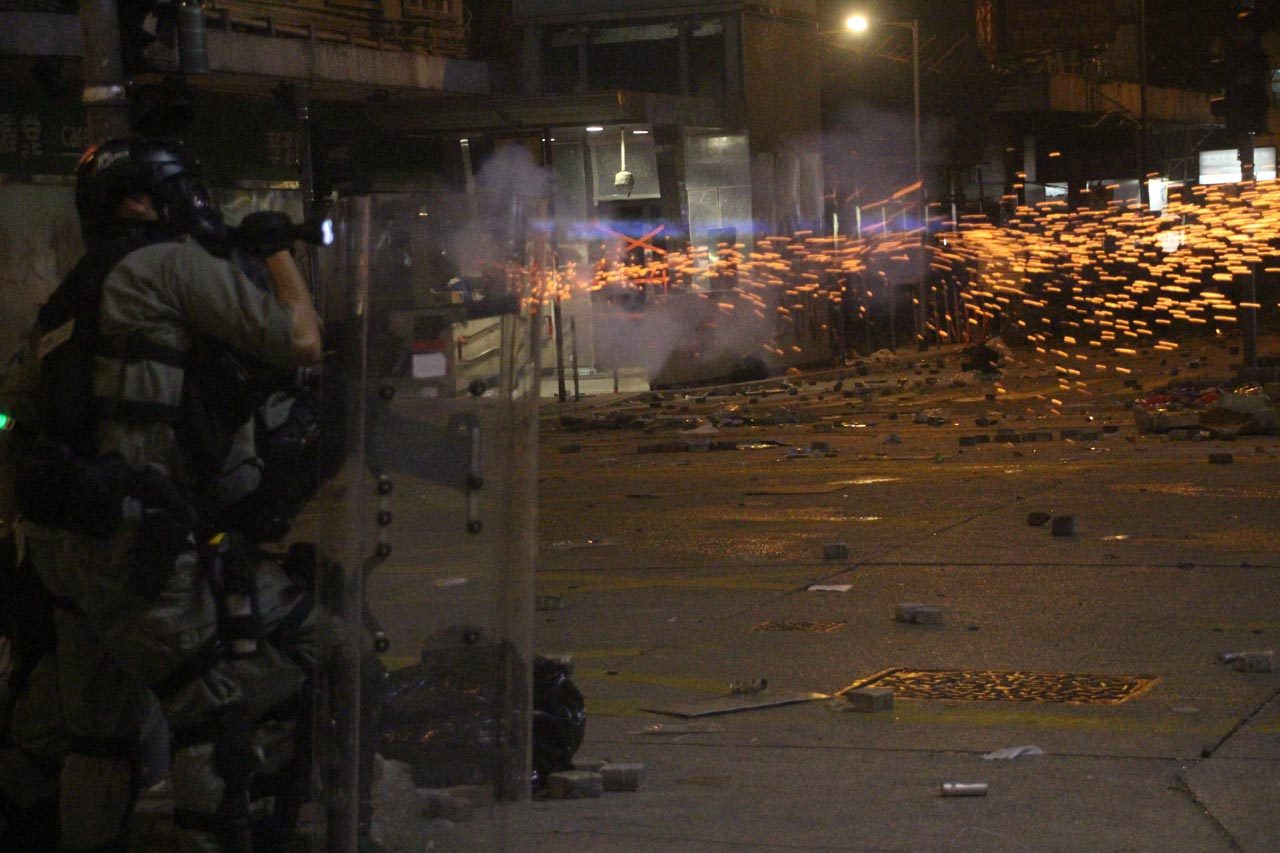 On the ground, the Hong Kong police rarely do themselves any favors. With their growing recklessness towards protesters (and press), their popularity is at an irreversible point.  Their mix of aggression and restraint would appear to show discoordination that trickles down from the top, suggesting lack of diplomatic leadership. Their actions have sometimes been necessary, especially to disperse hardliners tearing up the city, but on many occasions, their acts have puzzled the majority. Firing rubber bullets at crowds, disrupting demonstrations with early afternoon rounds of tear gas, and the unnecessary manhandling of citizens of all ages all echo unpredictability.

There’s an apparent mismatch within the ranks where experienced officers who communicate appropriately work alongside the aggressively eager officers who seem erratic in everything they do. Chris Ping-keung Tang is the recently appointed police chief who may oversee some changes, but it remained to be seen whether a new influence will be a game-changer in a police force that has run out of ideas. The police are the ones in the firing line with 74% of Hong Kong citizens blaming them for the violence.* Going by what’s happened so far, it’s questionable whether they can ever fix these problems alone.

The Hong Kong government has the power to compromise, prevent, and change how things are in Hong Kong – or so we’re told to believe – with the behind-the-scenes approval from Beijing. At the time of writing, a whopping 83% blame the government for the violence.*

With Chief Executive Carrie Lam at the helm, it is her stubbornness not to push for a path to a solution that is the problem. Her announcements give the sense they are pre-scripted from her bosses, rather than having any prominent say for herself. She is on repeat mode, regularly condemning the acts of protesters while recently claiming the “protesters are the enemy of the people.” Yet, there have been reportedly millions of protesters turning out to contest her government, with thousands relentlessly showing up week after week. It begs the question, how can she make such an accusation to a large proportion of the Hong Kong population? Her insistence on defending the rule of law loses any credit because she is working with a police force that has challenged that very statement.

Although the mass criticism of the Hong Kong police is over the top, it is clear they are challenging that rule of law with their controversial actions. We’ve witnessed evidence of brutality, press mistreatment, misinformed statements, and knee-jerk reactions. Lam’s words have lost confidence and meaning to the Hong Kong public and she continues to fail to seek a political solution and a path forward. Many government heads in a similar situation would have resigned, but whether it’s Lam’s decision or not, she remains in charge despite her mistakes. Even though the eventual removal of the extradition bill was probably something she encouraged Beijing to approve, as Hongkongers said, it was “too little, too late.” Her actions during these months of clashes question her suitability to be at the helm. We all know Beijing is closely looking at the situation in Hong Kong, gritting its teeth at what they are allowing and what they want to do. Despite the sneaky erosion of Hong Kong freedoms over the years, Beijing is at the moment, more restrained than anyone has given it credit for. Inevitably it will have the final say on what happens to the Hong Kong post protest, up to and after 2047, but right now it its attempting to resolve the problems  within the territory, not from outside.

Basics of how the clashes have happened so far

Whether a demonstration gets approved or not, the rallies normally happen anyway.

Riot police will turn up at the scene – depending on their own decision – in an attempt to disperse and tone down the movement. This happens regardless of whether these are peaceful, approved, and unapproved marches. Protesters will lure the police in for a huge, widespread game of urban cat-and-mouse. Slowing the police down with barricades, they continue with the aim of wearing the police out. Further damage has purposely been done to Mainland Chinese-associated businesses or companies rumored to be in collusion with the Hong Kong government. The Mass Transit Railway (MTR) has been the most notable victim for severe damage across its stations.

Up until early November, protests have largely occurred in their masses and prominence at the weekend, but that has changed, with any day a possibility.

At the time of writing, the concern on the ground in Hong Kong is currently at an all-time high. The city has been turned upside down with the ongoing unrest, and we’re now seeing a different pattern in the actions from the frontline. Gone are the patient hours that precede the clashes between protester and police; now we’re seeing the inevitable happen far quicker. 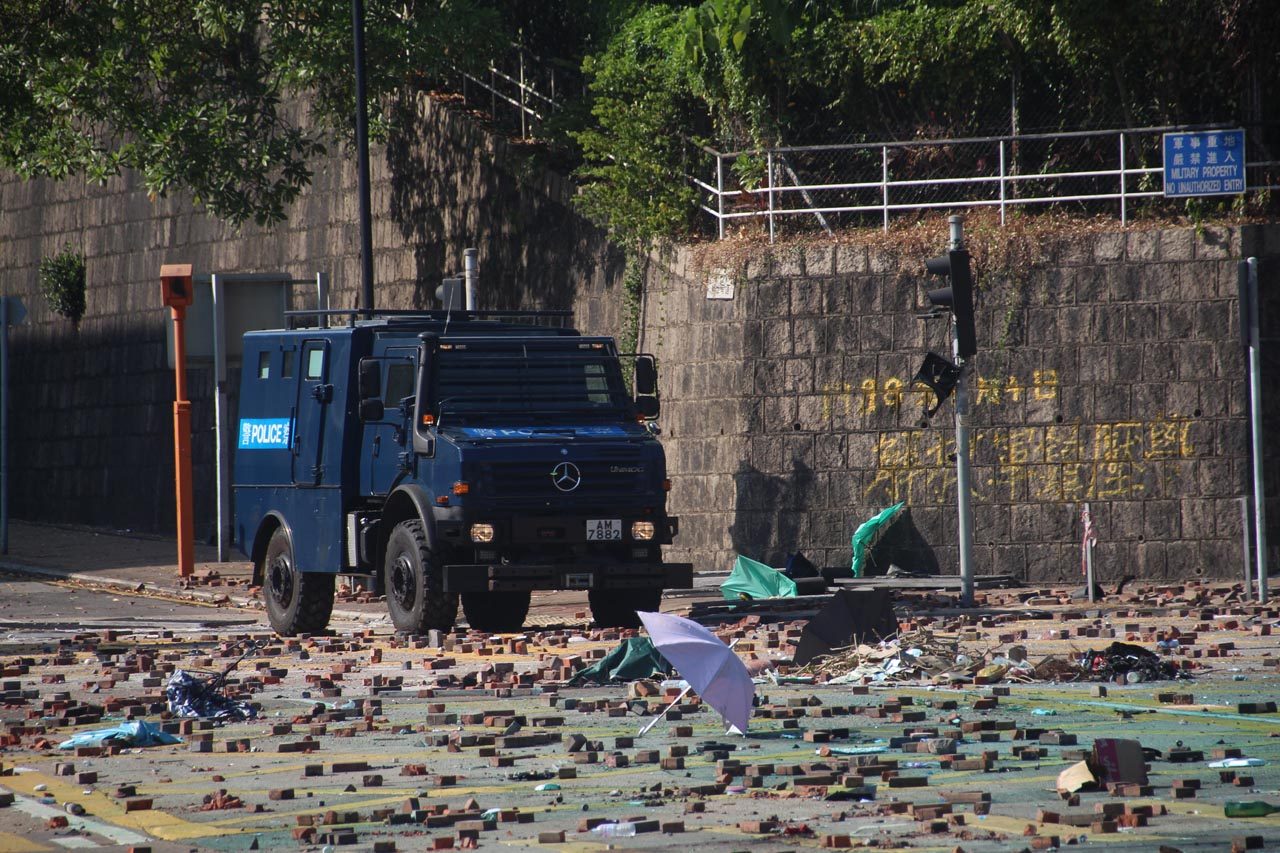 In recent weeks, there have been incidents to prove the Hong Kong protests are getting worse. Alex Chow, a 22-year-old student, was remarkably only the first death that led directly from the protests in 5 months of demonstrations. In between those incidents, at 7:20 am on November 11, a police officer shot at a protester at point-blank range following clashes.

Political figures have also been viciously attacked while a pro-Beijing supporter was horrifically set alight after a clash with protesters. Locations and time are changing, with Central, Hong Kong’s main business district, turned into a warzone during lunch hour on a Tuesday (November 12). The Hong Kong universities have become core battlegrounds, with scenes of an urban apocalypse that continued for days on end. With over 5 victims in universities, PolyU lasted for over a week, something that is further evidence of the lack of leadership across the board in Hong Kong.

Undoubtedly, police are stretched and protester numbers on the frontline are smaller. But the demonstrations are at a stage that gives you a shudder. There is intense energy on the ground that is impossible to ignore but ultimately if this continues, Hong Kong is on the brink.

The US is trying to support Hong Kong with the Human Rights and Democracy Act for Hong Kong passing its Congress, but is that also too little, too late? The only next thing one would think is for the intervention from the overlords in Mainland China. Whether that happens or not has always been a topic of discussion, but one thing is for sure, Hong Kong as we know it has changed forever. As it stands, no one is putting their hands up and taking charge. – Rappler.com