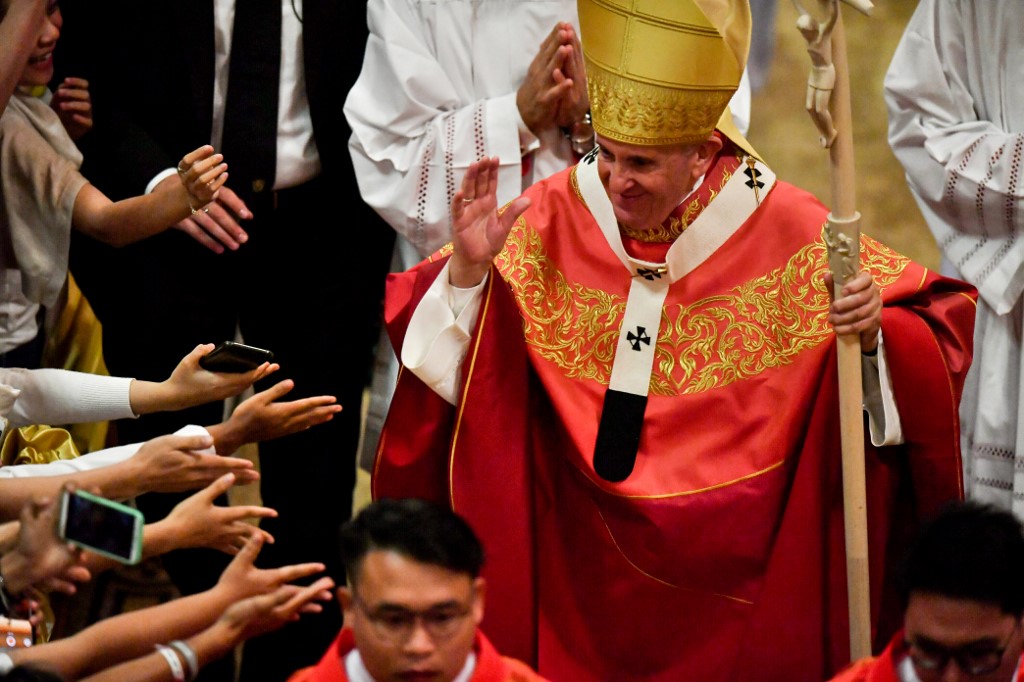 BANGKOK, Thailand – Pope Francis warned against the potential pitfalls of technology and the competition for young people’s “attention” on Friday, November 22, dedicating the final full day of his Bangkok trip to engaging the next generation of Catholics.

The pontiff is on his first visit to Buddhist-majority Thailand, where just a sliver of the population is Catholic despite the religion’s long history in the country.

He has called for religious harmony and peace throughout his four-day tour, a message he will likely carry on Saturday to Japan where he will visit the sites of the world’s only nuclear attacks.

But on Friday, he shifted his focus toward Thailand’s youth, warning the next generation of the downsides of fast-encroaching technology.

“Rapid technological advancements can open up immense possibilities that make life easier, but can also result in the growth of consumerism and materialism,” the Pope cautioned.

Later in the day he led a mass for Thailand’s young adherents, urging them to remain steadfast in the face of rival influences.

“We can be swayed by the voices of this world that compete for our attention,” he said, speaking at Bangkok’s 109-year-old Cathedral of the Assumption.

“At first they seem appealing and exciting, but in the long run they will leave you only empty, weary, alone and disenchanted,” he said.

The message was a clarion call to the young worshippers in Thailand, where fewer than 400,000 Catholics make up just over 0.5 percent of the population.

The faith arrived in the country via European missionaries in the 16th century, and the community has since remained small but spirited — coexisting peacefully with Buddhist neighbours.

But Thai Bishop Joseph Pradhan Sridarunsil said they were facing a crisis as interest in the religion dwindled among the youth.

“The Thai Church nowadays is facing the same situation as other countries in the world, namely a crisis of decreasing vocation,” he said.

Young Christian adults are much less likely than older Christians to say religion is very important to them, and fewer than half those surveyed pray daily, according to a global Pew Research Center report from last year.

Fading interest was far from evident on Friday, however, as scores of faithful gathered outside the cathedral – many jostling for mobile phone photos – for Francis’s second mass of the trip.

For some, the Pope’s warning words for Thailand’s youth were welcome.

“There are other things attracting (teenagers)… like interesting content available on YouTube and it is easy for teenagers to be addicted or targeted by these things to become more materialistic,” said Siriyaphorn Phongburut, 40, standing outside the mass.

She urged the Church to use social media to attract young adherents, in a country where mobile phone use is rampant.

On a busy Friday Francis also visited a shrine for Catholic martyr Nicholas Boonkerd Kitbamrung and attended an interfaith meeting, where a mixed Muslim and Christian choir sang for him in a symbolic performance.

His final official duty was his youth mass at the ornate Cathedral, packed with bishops wearing brilliant red and gold robes custom-made for the occasion — the Pope’s included.

His pointed message was not a huge departure for the Pope, who has long sought to engage the next generation of Catholics.

“The Pope always gives importance to youth which he believes is the foundation of society, country and religion,” said Puttipong Puttansri, a Thai historian of the Catholic Church.

Francis touched down in Bangkok on Wednesday and was met by adoring worshippers eager to catch a glimpse of the 82-year-old Argentine.

His first mass on Thursday night – replete with hymns, prayers and traditional Thai performances – drew an estimated 60,000 people, some crying as the pontiff passed in his Popemobile.

There he urged respect for the downtrodden, including prostitutes and trafficking victims.

He heads to Japan on Saturday for the second and final leg of his Asia tour, which will include visits to Nagasaki and Hiroshima, both devastated by atomic bombs by the US during World War II.

The pope, who years ago had hoped to be a missionary in Japan, is expected to chastise the use of “immoral” nuclear weapons. – Rappler.com