Nov 29, 2019 7:16 AM PHT
Agence France-Presse
Facebook Twitter Copy URL
Copied
Bolivian Foreign Minister Karen Longaric says Mexico's refusal to hand over people accused of common crimes 'would be a very serious problem for them and uncomfortable for us' 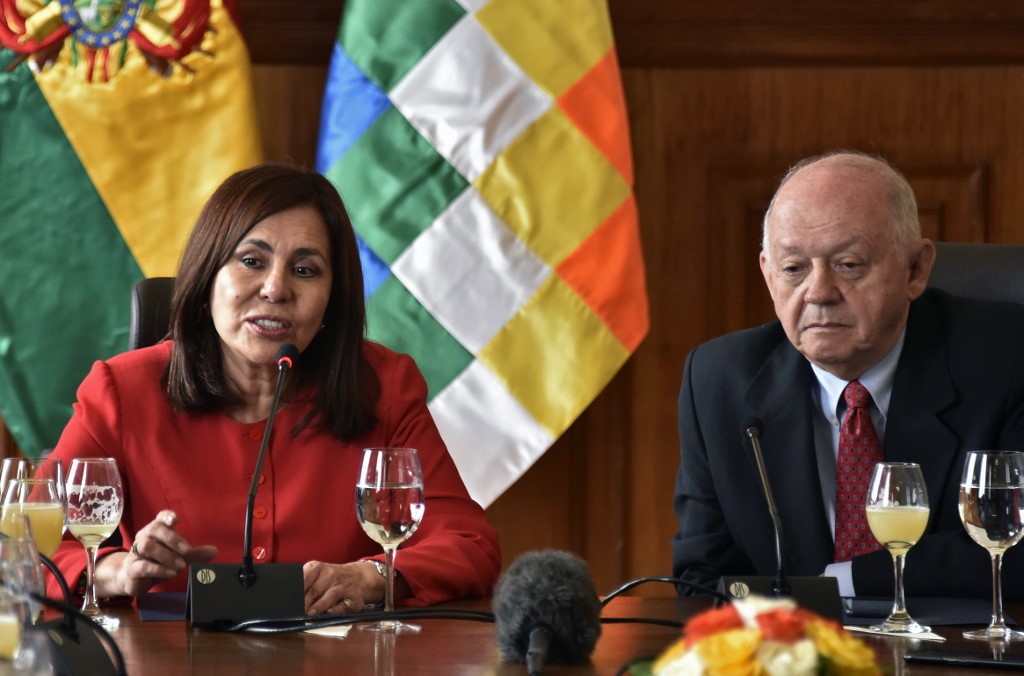 LA PAZ, Bolivia – Bolivia’s foreign minister said Thursday, November 28, Mexico will face a “very serious problem” if its embassy in La Paz refuses to hand over ex-government officials wanted for arrest, warning they could be there for years.

More than 20 former members of ex-president Evo Morales’s government have holed up in the Mexican embassy.

Bolivian prosecutors have issued arrest warrants for 5 of them, the ministry said Tuesday.

They include Morales’s former top minister Juan Ramon Quintana, who has been accused of sedition and terrorism – the same allegations leveled at Morales – and former culture minister Vilma Alanoca, who is wanted for “instigating a crime.”

Foreign Minister Karen Longaric told foreign reporters Mexico’s refusal to hand over people accused of common crimes “would be a very serious problem for them and uncomfortable for us.”

The Mexican diplomats “would have to resign themselves to these people staying in the embassy for the years of this government and the next,” Longaric said.

“These people will stay in the embassy residence for a very long time.”

Relations between Bolivia and Mexico have been strained since Morales fled there after resigning on November 10 amid violent street protests that erupted after the disputed October 20 election.

Morales, who had been seeking a fourth term after ruling for nearly 14 years, claimed victory. But opposition groups said the results were rigged.

Interim President Jeanine Anez, who replaced Morales after he quit, has signed off on new elections.

Federal prosecutors are investigating allegations that Morales, after arriving in Mexico, encouraged his supporters to maintain road blocks that caused severe food and fuel shortages in La Paz.

Interior Minister Arturo Murillo played a telephone recording to journalists last week, allegedly of Morales issuing instructions to a leader of the opposition movement in Bolivia.

Bolivia has lodged a formal protest to Mexico over Morales’s remarks, saying they “contravened” his political asylum status.

Longaric also told reporters that Bolivia is restoring diplomatic relations with Israel, which it severed in 2009 under Morales over Israeli attacks on the Gaza Strip.

The move, which was welcomed by Israel, comes after Bolivia appointed an envoy to the United States for the first time in 11 years, as the right-wing caretaker government seeks to re-write the country’s foreign policy after the departure of Morales.

Bolivia also fired all its ambassadors except those to Peru and the Vatican. – Rappler.com