Dec 13, 2019 8:09 AM PHT
Agence France-Presse
Facebook Twitter Copy URL
Copied
An military team is dispatched to recover 8 bodies that remain on New Zealand's most active volcano, which sits semi-submerged 50 kilometers out to sea 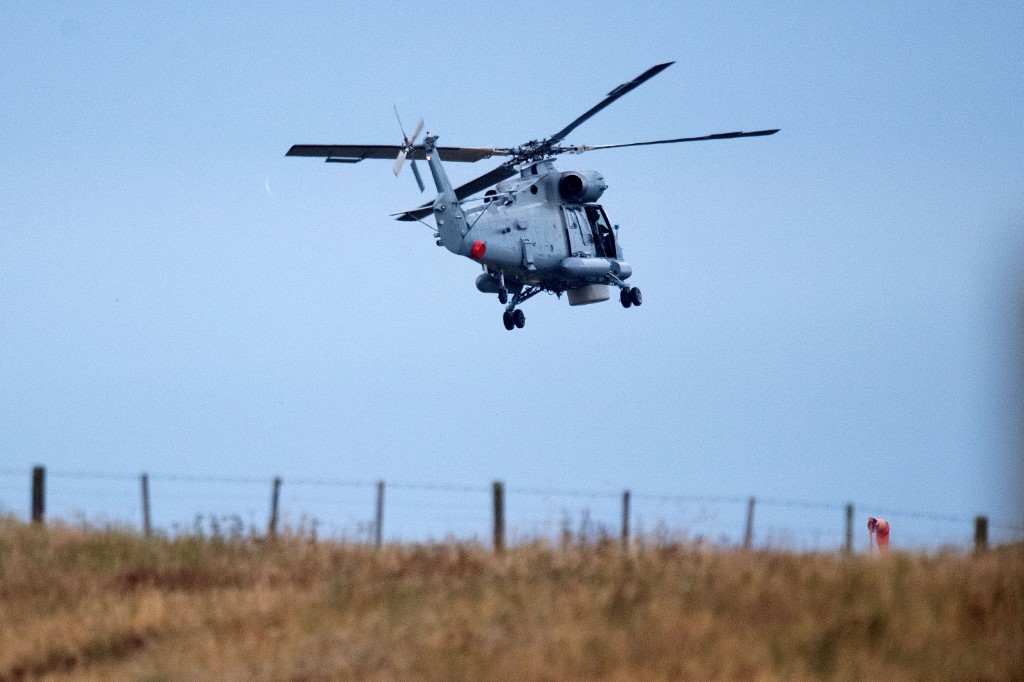 WHAKATANE, New Zealand – A team of elite New Zealand soldiers airlifted 6 bodies from the volatile White Island volcano Friday, December 13, police said, in a mission carried out under the ever-present threat of another eruption.

AFP witnessed two military helicopters set off from Whakatane airport at first light for the offshore volcano, where an eruption last Monday is believed to have killed at least 16 people and severely injured dozens more.

The eight-strong military team was dispatched to recover eight bodies that remained on New Zealand’s most active volcano, which sits semi-submerged 50 kilometers (30 miles) out to sea.

After a tense wait of more than 5 hours, word came through from police that the majority of the bodies had been recovered and sent to a naval frigate anchored off the coast.

“Six bodies have been successfully recovered from Whakaari-White Island and are now on board HMNZS Wellington,” deputy commissioner John Tims said.

It was unclear whether the team would return to try to recover the two sets of remains still believed to be there.

Drone flights had helped locate 6 of the bodies before the operation began and they were the team’s priority as they labored on the island in heavy protective gear that slowed them down and restricted movement.

Police said on the eve of the operation that they would search for the remains of the other two missing people but had limited time in such a dangerous environment.

As the military began their grim task, police took grieving families out near the volcano on a boat to perform a Maori blessing and locals chanted karakia, or prayers, on the shore as the island smouldered in the distance.

As the mission was under way, deputy police commissioner Mike Clement warned “there are many things that could go wrong” but added it was so far “playing out as we hoped”.

Prime Minister Jacinda Ardern also provided an update, saying the mission was being carried out to bring home grieving families’ loved ones.

“It has been an incredibly difficult operation but it’s been such a priority. We just want to bring everybody home,” she told Australia’s ABC Radio.

After coming under pressure from the families, authorities approved a recovery mission despite a 50-60% chance of another blast from the volcano in the next day or so.

Volcanologists monitored live feeds from the mountain, ready to abort the operation if signs pointed to another eruption.

As they began the mission, White Island was at “Alert level 2” – the highest before an eruption.

“Of course, I’m worried. I would be inhuman if I did not worry,” Clement said on the eve of the mission, adding “we have a job to do”.

“People are putting themselves on the front-line to do the right thing… our thoughts and our prayers and our love will be with them,” Clement said.

The bodies on the island are thought to include New Zealand tour guide Hayden Marshall-Inman.

“It’s going to allow us to grieve and send our loved ones off in the manner they deserve,” he told the New Zealand Herald.

On White Island, poisonous gases are still billowing from the volcanic vent and the island is blanketed in a thick layer of acidic ash.

While troops were recovering the bodies, another 28 people – mostly tourists who had been on a day trip to see the natural wonder – were still being treated in hospitals across New Zealand and Australia, many in a critical condition suffering severe burns.

The survivors’ injuries are so severe New Zealand doctors initially estimated they would need to import 1.2 million square centimeters (185,000 square inches) of skin for grafts – although that was likely to be revised down as victims were moved overseas to ease the strain on hospitals.

A total of 47 day-trippers and guides were on the island during the eruption, with police saying they were in two groups, one of which was closer to the volcanic vent and worst hit.

Those caught by the eruption hailed from Australia, the United States, Britain, China, Germany, Malaysia and New Zealand.

While Australian officials have only confirmed one dead, they say a further 10 were missing and presumed to have perished.

A coronial process has begun to identify those confirmed dead but police have said it could “take some time”. – Rappler.com

Here are more stories about the volcanic eruption in New Zealand: