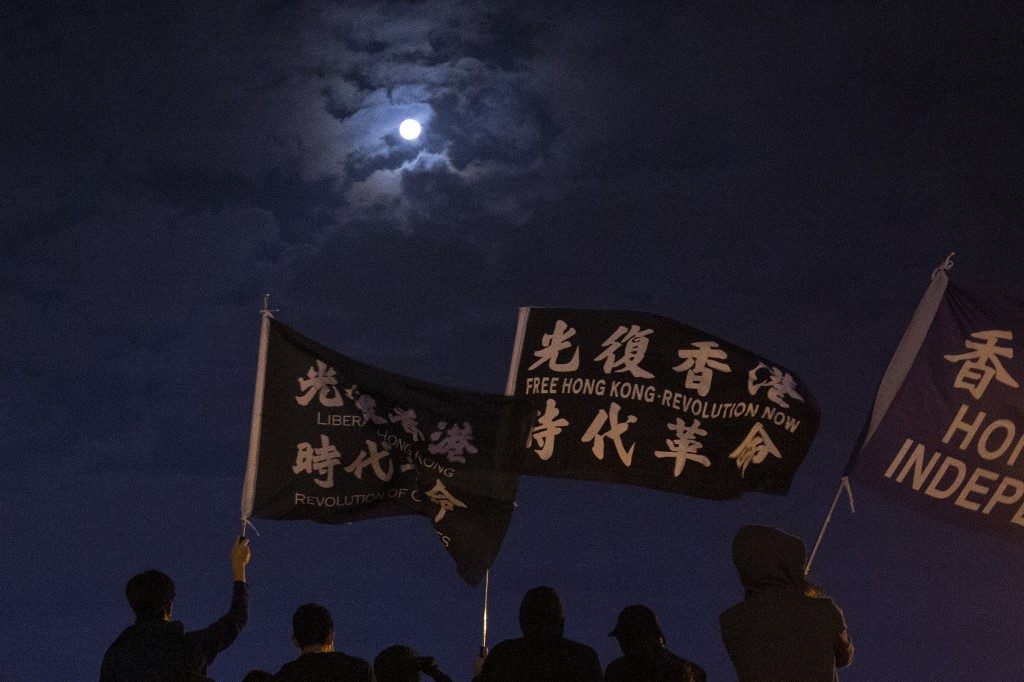 Facebook Twitter Copy URL
Copied
(UPDATED) The 3 males and two females aged 15 to 18 are arrested on suspicion of murder, rioting and wounding, and have been detained pending further investigation, says police

HONG KONG, China (UPDATED) – Five Hong Kong teenagers have been arrested in connection with the death of a man hit on the head by a brick during clashes between pro- and anti-government protesters last month, police said on Saturday, December 14.

The 3 males and two females aged 15 to 18 were arrested on Friday on suspicion of murder, rioting and wounding, and had been detained pending further investigation, police said in a statement.

The incident occurred in mid-November as the pro-democracy movement was in its fifth month, with hardcore demonstrators engaged in a “blossom everywhere” campaign across the city to stretch police resources.

Footage of the incident showed rival groups of protesters throwing bricks at each other, during which a man was hit by a brick and fell to the ground.

The 70-year-old was rushed to hospital unconscious and certified dead the following day.

He was the second person in less than a week to die in protest-linked incidents.

Alex Chow, a 22-year-old university student, died on November 8 from head injuries sustained during a fall in a multi-storey carpark while police and protesters were clashing.

Although the events leading to his fall are unclear and disputed, protesters have blamed police.

Allegations of police brutality are one of the movement’s rallying cries.

Thousands of Hong Kongers formed long lines to attend a memorial service for Chow on Thursday ahead of his funeral.

Chow’s death was followed 3 days later by police shooting an unarmed 21-year-old protester in the abdomen, sparking days of unrest that culminated in pitched battles on university campuses.

Meanwhile, police arrested three men, aged 27 to 40, on Saturday morning in relation to a test of explosive materials and remote control device in a remote area in northwestern Hong Kong.

Li Kwai-wah, senior superintendent of the organized crime and triad bureau, said they believed the men were planning to use the explosives during processions and that they were investigating who the potential target was.

Hong Kong has been upended by 6 months of massive pro-democracy protests that have seen violent clashes between police and hardcore demonstrators, as well as regular transport disruption. (WATCH: 800,000 people mark 6 months of Hong Kong protests)

The past 3 weeks have seen a lull in the violence and vandalism after pro-democracy parties won a landslide in local council elections. – Rappler.com